I want to make the argument that government-backed securitization—i.e., something approximating the core functions and parameters of the much-maligned government-sponsored enterprises (GSEs) Fannie Mae and Freddie Mac—is necessary and prudent for the future of housing finance reform. To do so, I want to convince you of three propositions that I think are clearly correct and have not been widely acknowledged. These arguments, with a large amount of additional supporting evidence, are fleshed out in much greater detail here.

First, the federal government’s high degree of involvement in housing finance is neither a recent nor unique phenomenon. Since the New Deal, the federal government has guaranteed the vast majority of U.S. housing finance. While the dominance of the GSEs and government-backed securitization is relatively recent, the thrifts and banks that preceded the GSEs as the major sources of home mortgage funding in the United States were also “government-sponsored” in many of the same ways that Fannie and Freddie are today.

Like Fannie and Freddie, banks and thrifts had a valuable charter that gave them a local monopoly, and provided them with access to federally guaranteed sources of funding, including federally insured deposits and liquidity from the Federal Reserve and Federal Home Loan Bank System. Moreover, thrifts were also monoline institutions that emphasized the origination of 30-year fixed-rate loans.

As the below chart illustrates, when you take into account all government guarantees in housing finance—those on “Agency” securities (Fannie/Freddie and Ginnie Mae), and federal deposit insurance for banks and thrifts—you see that such guarantees have existed for the vast majority of home loans originated since the 1940s, typically accounting for more than 70% of outstanding mortgages. 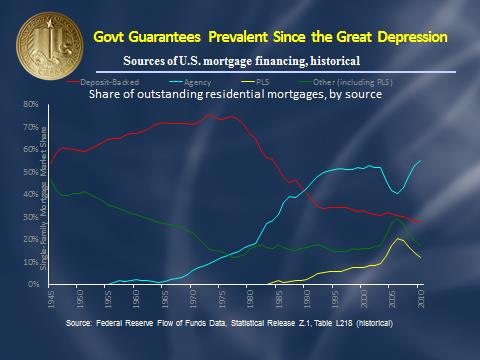 Nor is the United States alone in providing such a high level of governmental intervention in housing finance. You often hear the claim that the U.S. has an unusually high level of government intervention in housing finance, based on the fact that the U.S. is among a handful of countries that provides government guarantees for mortgage-backed securities (Korea, Japan and Canada are the others). But this claim is extremely misleading, because it ignores the fact that most other countries don’t rely on MBS to fund home mortgages. As I’ve noted previously, bank deposits and other financial instruments—not MBS—are the dominant sources of mortgage funding in most other countries.

When we take into account the actual sources of mortgage financing in other countries, what we find is that government guarantees are universal throughout the developed world, as the next chart describes. Every First World country in the world has government deposit insurance, and other implicit guarantees are also ubiquitous. Indeed, the recent financial crisis saw trillions of dollars in European bailouts directed to the banks and covered bonds that support European housing finance, an amount that dwarfs U.S. bailouts during the same period. 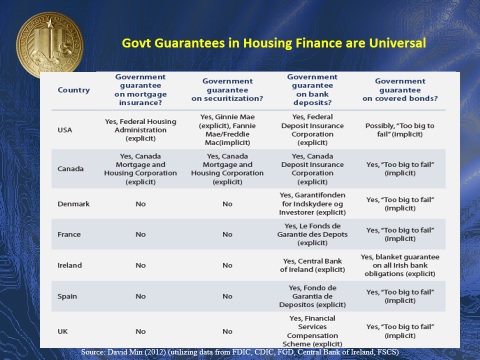 But why do governments all play such a large role in housing finance? This brings me to my second point, which is that the government’s support of housing finance has historically served a beneficial purpose, both in providing affordable and widely available mortgage funding to working-class Americans, and also in stabilizing the housing finance system, which is otherwise vulnerable to frequent shocks and crises, of the sort we just experienced in 2007-08.

It is helpful here to look at what housing finance looked like before the federal government got involved. Mortgages prior to this time were relatively scarce and quite expensive. Perhaps most importantly, mortgage terms were extremely onerous for consumers. The typical mortgage was a 50% down, 2-5 year interest-only loan, designed to be fully repaid or refinanced at maturity (notably, this is similar to the standard commercial real estate mortgage today). This loan was thought to be quite beneficial to lenders, with no prepayment risk, limited interest rate risk, and large buffers against credit risk. But by leaving so much risk with the consumer, this product may have created a high degree of systemic risk. During the Great Depression, when home prices declined and bank credit receded, millions of homeowners found themselves unable to refinance their expiring loans. The result was a 50% national delinquency rate and a 10% national foreclosure rate.

Importantly, the presence of government guarantees into housing finance has overlapped neatly with financial stability, as the below chart illustrates. Prior to the New Deal, when such guarantees were introduced, our financial system suffered debilitating crises every 5-10 years. The introduction of broad government guarantees in housing finance has coincided with a tremendous and unprecedented period of financial stability lasting some 80 years, which ended in 2007. Perhaps not coincidentally, this was the first time since the late 1940s when purely privately funded mortgages comprised a significant share of the market. As has been well documented, loans originated for PLS grew to account for about 40% of all mortgages, and these same loans experienced incredibly high default rates (about 30% on average). 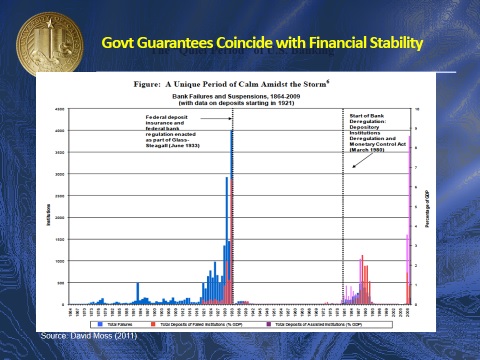 The last point I want to make is that government-backed securitization is critically important. An important contribution of the GSEs has been in promoting the 30-year fixed rate mortgage, a product I believe has been a key factor for the stability of the U.S. housing finance system. It’s an extremely consumer-friendly loan, and as a result, has historically enjoyed very low delinquency rates. This was true even in the recent crisis, as 30-year FRM experienced delinquency rates that were exponentially lower than other types of mortgages.

Since the collapse of the savings and loan industry in the late 1980s, government-backed securitization has been essential to the wide availability of the 30-year fixed-rate mortgage. Without the GSEs, or something like the GSEs, we would likely have to move to a system that emphasizes adjustable-rate loans or short-term bullet loans, such as the UK or Canada do.

Moreover, even if we wanted to transition away from government-backed securitization, it is not clear we would be able to do so in the near future without significantly disrupting the mortgage markets.

The next chart (reprinted with the permission of PIMCO) illustrates who currently buys Agency MBS—banks, the GSEs themselves, overseas investors, state and local governments, mortgage REITs, and money managers. Of course, since the financial crisis, a major purchaser has also been the Federal Reserve. 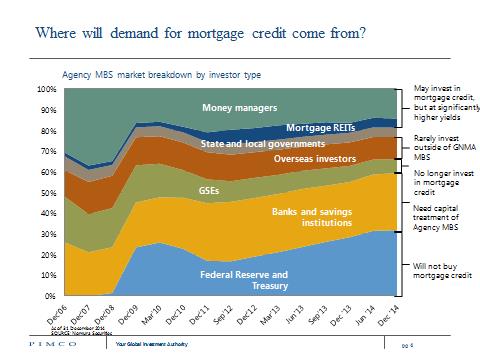 For various reasons, most of these purchasers are essentially locked in to government-backed securities. The only categories of investors that would theoretically purchase private-label MBS without a government guarantee are the REITs and the money managers, and they would need significantly higher yields to do so, by some estimates 200-300 basis points (2-3%) higher. So when we talk about a world without the GSEs, we need to figure out either how to attract these investors or to find other sources of investment.

Nor does private-label MBS appear to be a viable replacement for government-backed securitization. Since the crisis, there have been only a handful of residential RMBS deals, and as the next chart describes, the underlying mortgages had incredible credit characteristics. It’s hard to imagine how PLS will achieve scale anytime in the foreseeable future. 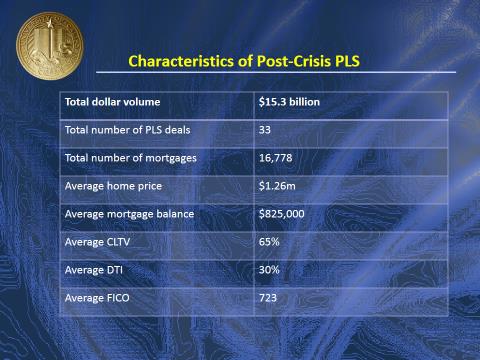 Since the crisis, as Prof. Adam Levitin at Georgetown University Law Center has noted, there have been only a handful of residential RMBS deals.  As the next chart describes, bank deposits do not appear to be a large enough source of funds to replace the activities of the GSEs. 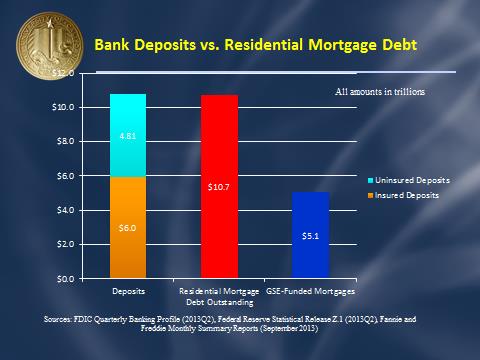 In short, there are good policy reasons to prefer government-backed securitization—it promotes widely available mortgage finance, and encourages financial stability. But even if we want to move away from this system, the underlying realities make it difficult to imagine how we can do so in the near future.

This post came to us from David Min, Assistant Professor of Law at the University of California-Irvine School of Law. The post is based on his remarks at the 2015 AALS Annual Meeting, panel on The Future of the Federal Housing System.