A watershed moment is coming for shareholder activism and corporate governance generally, as the proxy contest brought by Trian Management Fund, seeking effectively to break up DuPont, enters its final stages (with the vote being less than a month away). Technically, the contest is to elect four Trian Fund nominees to the DuPont board, but, as a column in the New York Time’s Dealbook put it more bluntly, the real fight is over whether to break DuPont into three parts and “shut down DuPont’s central research labs.”[1] Much about this contest is unusual: unlike other targets of activism, DuPont has regularly outperformed the S&P 500 Index and virtually all other metrics for corporate profitability. Its stock price has risen over 185% since its CEO, Ellen Kullman, took office six years ago (while the S&P 500 Index rose only 122% over the same period).[2] The Trian Fund owns only a small stake (less than 3%), but still the contest is close. This column will use this episode as a stalking horse by which to approach a key issue in corporate governance today and also as a case study that illustrates both what we know and still do not know about hedge fund activism.

Let’s start with what we know. Hedge fund activism dates back for at least a decade to the appearance of proactive hedge funds that bought stocks specifically to challenge the management.[3] With that development, institutional activism moved to the offense, departing from a prior history of largely being defensive in nature (i.e., opposing managerial initiatives). What caused this development? Some of the answer lies in deregulatory SEC rules, but probably more of the answer stems from the inability of a hedge fund to consistently beat the market. If the market is efficient (or even approximately so), a hedge fund cannot outperform it for long as a stock picker—unless it buys stocks intending to change existing management policies and thus enhance firm value. Intense competition and thin returns probably drove some hedge funds into becoming pro-active. Relatively quickly, a consistent pattern emerged to characterize this new activism: on the filing of a Schedule 13D by an activist investor, the stock price of the target shows an immediate abnormal return of around 6 to 7%.[4] Whether this short-run price improvement later dissipates has long been debated,[5] but now there is newer data. The latest study, just released in March, shows that long-run returns to shareholders depend on the outcome of the activists’ engagement with the target.[6] If the activists fail to achieve their desired outcome, the long-term return is modestly negative.[7] If, however, the activists succeed, everything depends on what outcome they were seeking. The market largely ignores changes in corporate governance and “liquidity events” (such as special dividends or stock buybacks),[8] but jumps with alacrity in response to takeovers and restructurings.[9] This suggests that the real source of the gains to pro-active hedge funds is not superior corporate strategy, but increases in the expected takeover premium for the target. Apparently, the market perceives most corporate governance issues as important only as a signal of an impending takeover battle. Still, if nothing more materializes, the target’s stock price will stabilize or decline. Even if activists present themselves as superior business strategists or marketing gurus, their success comes largely from jump-starting a takeover or a bust-up.

Nonetheless, some things have truly changed. Chief among these is the development of a new tactic: the “wolf pack” campaign.[10] The “wolf pack” is a loose association of hedge funds (and possibly some other activists) that carefully avoids acting as “group” so that their collective ownership need not be disclosed on Schedule 13D when they collectively cross the 5% threshold.[11] It is distinctive in at least three major respects: First, the wolf pack acquires a much larger stake in the target. In the past, dissatisfied institutional investors might talk to each other and make a shareholder proposal or even launch a proxy contest, but they did not buy stock because of their discontent. The latest study finds that the typical “wolf pack” acquires 13.44% of the target’s stock as opposed to an average of 8.3% for other activists.[12] But this estimate may substantially understate, as only those belonging to a formal Section 13D “group” are required to disclose their presence in the target’s stock. The essence of the “wolf pack” is conscious parallelism among an informal network that deliberately stops short of “grouphood.” More importantly, because there is no breach of fiduciary duty when one activist hedge fund invites others to join with it in a still undisclosed campaign to unseat board members at the target, tipping such plans within their loose network does not amount to insider trading (at least if no tender offer is planned).[13] As a result, the wolf pack’s members can profit from the lawful use of material, non-public information.[14] Such profits are nearly riskless.

Second, the announcement of the wolf pack’s formation (on the filing of a Schedule 13D) provokes a much sharper market reaction—a roughly 14% abnormal gain as opposed to 6% for other activists.[15] Almost certainly, this is because the market perceives a higher probability of a takeover premium or a “bust-up” sale of assets when a wolf pack is behind the campaign.

Finally, the prospects of success are much higher for the wolf pack. Two studies this year place the likelihood of a successful outcome to a wolf pack campaign at over 75% (significantly higher than the probabilities of success for other activists).[16]

Historically, bust-up takeovers were largely curbed prior to 2000 by a combination of the poison pill, state anti-takeover statutes, reduced availability of financing, SEC disclosure rules, and judicial decisions. But the wolf pack can evade all of these restraints. So long as no formal “group” is formed, the standard poison pill will not be triggered, and as much as 25% or more of the stock can be assembled by the wolf pack by the time its leader does file its Schedule 13D. Financing is also no problem as billions are flowing into hedge funds today.

So what then is the issue if the tactic appears to work so well? Target companies claim that significant costs are being imposed on them (as DuPont has asserted[17]), but economists will respond that this does not matter so long as the target’s stock price goes up. A few critics have asserted that the gains to hedge fund activism are largely wealth transfers from creditors and employees. Valid as this critique may be, few hearts bleed today for them, and this critique will not slow the lemmings in pursuit of the cliff.

Still, the latest evidence does suggest that there is a significant externality associated with hedge fund activism. The claim that hedge fund campaigns are discouraging expenditures on research and development and other long-term investments now has stronger evidence behind it. That claim came to the fore during last year’s takeover bid by Valeant Pharmaceuticals for Allergan. Valeant is a well-known “serial acquirer” that buys other pharmaceutical companies with established products, then cuts expenses to the bone, eliminating or greatly shrinking expenditures on research and development, preferring to milk the existing products. Although the Wall Street Journal reported that large pharmaceutical companies often spend 20% of their revenues on “R&D,” Valeant, it said, spent only 2.7% of its over $5.7 billion in revenues in 2013 on R&D.[18] Valeant pursued Allergan not as an ongoing pharmaceutical firm but as a one product cash cow whose Botox drug would produce a consistent cash flow. Indeed, Valeant publicly estimated that, if it succeeded in acquiring Allergan, it would cut R&D for the two combined firms by 69% and reduce employment by 20% (or well over 5,000 jobs).[19]

Economists might still scoff at this example as a mere anecdote. DuPont could also be discounted as an isolated case (although it is a major firm with an over 200 year history of successful innovation). But now there is statistical evidence. Taking the Wall Street Journal and FactSet’s Activism Scorecard (a data set of recent activist campaigns) and trimming this sample down to campaigns actually launched by activist hedge funds, a new study finds that even those targets that escape a takeover still are forced to curtail their R&D expenditures by more than half over the next four years.[20] The following graph shows this pattern and also the revealing fact that, for a matched control group, R&D expenditures actually rose modestly over the same period: 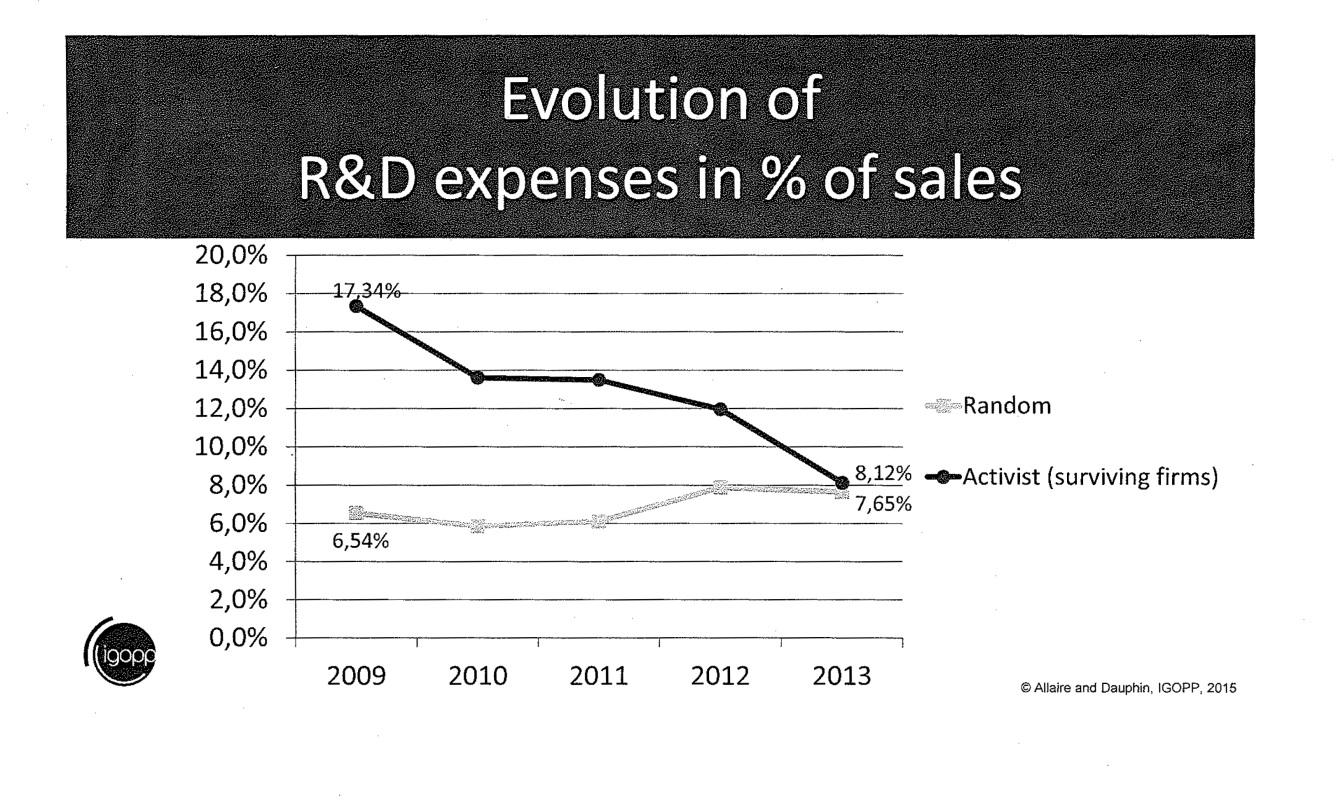 Again, this estimate of the decrease in “R&D” probably understates the decline, because the sample is limited (by necessity) to those firms that “survived” (i.e., escaped a takeover). Firms acquired as a result of an activist campaign probably experienced an even greater decline.

Presumably, it is self-evident that if an economy cuts back drastically on its investment in “R&D,” it will experience less innovation and technological advances in the future. Over the last forty years, the American economy enjoyed a comparative advantage over the rest of the world because of its ability to develop and sustain a Silicon Valley culture that stressed constant innovation. In the future, a Steve Jobs who is willing to bet his company on a new product (e.g., an Iphone) may encounter resistance from hedge funds. That should be a cause for concern.

But what is the answer? Legislation is unlikely, and the SEC seems reluctant at present to take action to close the Section 13D window. In a forthcoming article, Professor Darius Palia (an economist) and I discuss some modest measures that might subject activists to greater transparency and possibly shorten the leash on wolf packs.[21] But the real question for the immediate future is whether mainstream institutional investors (such as pension funds) will ever resist the hedge funds’ siren song. The DuPont campaign is significant precisely for that reason. If the Trian Fund wins, it shows that even iconic and highly profitable firms can be forced to refocus on the short-run. If the Trian Fund loses (which is how this author would bet), it implies that traditional institutional investors are beginning to see the problem and will not automatically ally with hedge fund activists. Stay tuned!

[8] “Payout changes,” they report, yield returns of minus 0.2 percent. Id. at 3. This is surprising because stock buybacks are a frequent demand of activists.

[11] Section 13(d)(3) of the Securities Exchange Act of 1934 requires a “group” with holdings in excess of 5% of a class to report in the same manner as an individual on Schedule 13D. But recent decisions have been conservative in determining when independent actors form a group. See Hallwood Realty Partners L.P. v. Gotham Partners L.P., 286 F. 3d 613 (2d Cir. 2012)(declining to find a group).

[13] When a “substantial step” has been taken toward a tender offer, SEC Rule 13e-4 becomes applicable, and it does not require a fiduciary breach. Otherwise, Dirks v. SEC, 463 U.S. 646 (1983), requires a fiduciary breach or misappropriation to support liability.

[14] This will become even clearer after United States v. Newman, 773 F. 3d 438 (2d Cir. 2014), which reversed insider trading convictions of hedge fund employees where the remote tippee was not aware of any “personal benefit” paid by the original tippee to the original tipper.

[17] See Jacob Bunge and Angela Chen, “DuPont Warns of Costs from Breakup,” The Wall Street Journal, April 7, 2015 at B-3 (estimating costs of $4 billion plus $1 billion in additional annual expenses).

The preceding post comes to us from John C. Coffee, Jr., the Adolf A. Berle Professor of Law at Columbia University Law School and Director of its Center on Corporate Governance.