To fully understand the modern corporation’s ownership, shape, and distribution of authority, one must attend to politics. Because basic dimensions of corporate organization can affect the interests of voters, because powerful concentrated interest groups seek particular outcomes that deeply affect large corporations, because those deploying corporate and financial resources from within the corporation to buttress their own interests can affect policy outcomes, and because the structure of some democratic governments fits better with some corporate ownership structures than with others, politics can and does determine core structures of the large corporation. Interest groups often seek to obtain via politics both immediate results and enduring institutions that promote their own current interests and preferences. They do so generally and they do so in ways that can determine corporate governance. The results may be efficient, neutral or, sometimes, socially inefficient.

Figures 1 and 2 illustrate the first generality of our argument here: the firm is embedded in financial, labor, and product markets, each of which affects the shape of the large firm and each of which attracts considerable attention of politics. The polity shapes the firm directly and, through these three markets, which are often politically contested, indirectly, as Figure 1 illustrates. 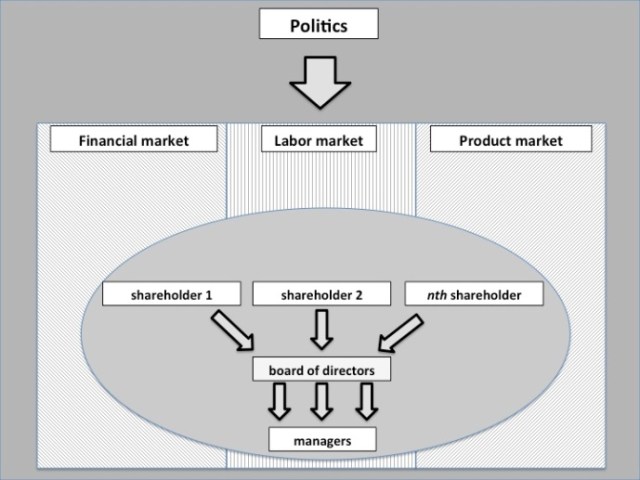 Moreover, the principal players inside the firm — corporate owners, executives, and employees — can themselves project political power. Owners seek mechanisms that minimize agency costs, managers seek autonomy, authority and prestige, and workers seek job stability and good wages; each seeks rules that favor themselves in contested transactions. They are at the three vertices in the triangle in Figure 2, with each side of the triangle representing a potential coalition between two of these actors. These three actors interact inside the firm and in the economy, and contend or coalesce in the political arena. Corporate governance arrangements inside the firm among these three main corporate actors interact deeply with a nation’s politics through party systems, political institutions, political orientations of governments and coalitions, ideologies, and interest groups. 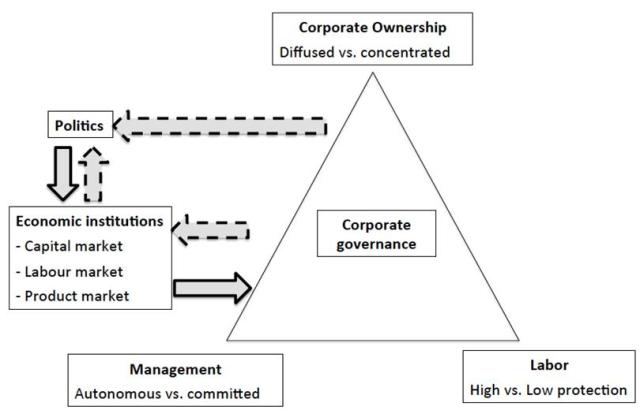 Figure 2: The “triangle” of political theory and corporate governance

A major part of the differences among corporate governance regimes in advanced industrial countries is determined by policies concerning labor protection, orientation to shareholder value, and product market conditions. How a polity decides to organize capital, labor, and product markets can deeply affect the firm’s corporate governance structure. However, complications abound. A simple map from politics to economics to corporate governance cannot be drawn because causation is bidirectional, as the dotted arrows in Figure 2 illustrate. Sometimes several economic, institutional, and political features are determined simultaneously. Sometimes there are multiple equilibria due to path-dependence phenomena, making the original conditions — which may result from chance and contestable events — determinative. Thus, the present corporate governance structure is the consequence of past politics and is also a cause of future politics and economic institutions.

In our handbook essay, for the Oxford Handbook on Corporate Governance, we examine three instances of vital intersections between politics and the organization of the modern corporation. In the first, we look at how the politics of organizing financial institutions affects the flow of capital into large firms and, hence, the power and authority of shareholder-owners. The channels through which capital flows into large firms can determine ownership structure and with it the distribution of governance authority in the large firm. If financial institutions are barred from owning stock or from operating on a large, national scale, to take an extreme example, then they will be unable to serve as a counterweight to managerial and board authority. Concentrated ownership with institutional blockholding will be difficult or impossible. Its opposite, diffuse ownership with strong managerial control, can readily become the only alternative if the polity prevents financial institutions from growing large or having a role in stock ownership and corporate governance. Powerful financial institutions will produce more of the former — blockholding — than of the latter — diffuse ownership with strong managerial control.

Because the flow and organization of capital attracts political attention, corporate structure can be, and often has been, a consequence of politics. The United States historically kept financial institutions small and without authority to own stock in and influence firms, coming close to the extreme instance just mentioned. As a consequence, when American industry went national at the end of the nineteenth century, the continent-spanning industrial firms could not raise capital from a nation-spanning financial market. Capital had to come from disparate institutions and individuals. In other nations, tight relationships between large-scale industry and large-scale finance were possible. As a result, in the United States the large public firm with diffuse ownership and powerful managers became more important, more widespread, and more persistent earlier than in other nations that had more concentrated financial institutions. Some of these patterns persisted well into and to the end of the twentieth century.

In the second instance, we examine the slowness of Continental European nations to develop diffusely-owned public firms in the decades after World War II. While the decades-long persistence of concentrated ownership was surely in important part due to economic forces, micro- and macro-politics strongly shaped the structure of the European firm. In particular, during the reconstruction after the Second World War, powerful labor movements in Western Europe made strong claims on firms’ cash flows. Diffuse ownership in a strongly social democratic political environment was dangerous for dispersed shareholders. When labor made these strong claims on firm value, shareholders needed more and stronger mechanisms to keep executives loyal to shareholders. But because the polity would not provide such mechanisms readily, or at all, owners had reason to stay close to the firm to handle managerial agents themselves — either by directly running the firm’s day-to-day operations or by keeping a close eye on the managers who did. Shareholders could contain labor’s claims on large firms’ cash flows better if stock was closely held by a few owners than if stock ownership was diffuse, which would lead to independent managers and an independent board running a diffusely-held firm. Hence, to keep the firm’s operating managers more loyal to shareholders, close ownership persisted.

The third example concerns management in diffusely-owned firms. Managers wield considerable political influence, which they use to shape the rules governing corporate finance and capital markets. In the 1980s, for example, American capital markets created the hostile takeover, by which an investor or another firm bought enough dispersed stock to control the targeted firm. Managers and directors sought to disrupt those hostile takeovers with poison pills, staggered boards, and antitakeover legislation and court rulings that made takeovers harder to accomplish. Similar activity persists today.

We do not assert that these three political channels exhaust all important political channels of corporate governance and, for completeness, we describe at the end of our essay several other channels, including some that need further research. And surely we do not reject the importance of analysis that looks to economics, law, finance, contracts, institutional capacity, and lawmakers’ sensibility of what’s right and appropriate for understanding corporate law and prescribing better institutions — i.e., we do not assert that behind each such perspective is a political economy story. Our aim is rather to develop the perspective that corporate governance often reflects political choice and this channel can complement other efforts to explain the shape of the modern public corporation in the United States and around the world. More sharply, we claim that without political economy analytics, the shape, structure, and extent of the corporation, its ownership, and its place in an economy, cannot be understood.

The preceding post comes to us from Mark J. Roe, the David Berg Professor of Law at Harvard Law School, and Massimiliano Vatiero, “Brenno Galli” Chair of Law and Economics at Università della Svizzera italiana. The post is based on their recent article which is entitled “Corporate Governance and Its Political Economy” and available here.