The European insurance sector has approximately 6.8 trillion euros of assets under management. It is the largest European institutional investor, a fundamental element of financial stability and provides support for the global economy. Additionally, the European insurance sector is a significant source of jobs, providing employment for more than one million people. The chart below illustrates the share of GDP represented by insurance premiums, generally defined as penetration ratios.[1] 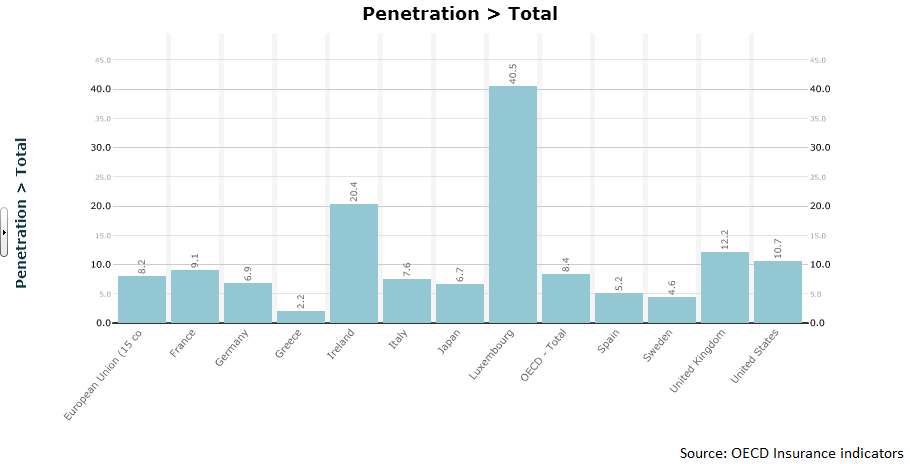 What is Solvency II?

The European Insurance and Occupational Pensions Authority (EIOPA)[4] is in charge of developing the technical standards and the implementation of Solvency II. It describes its objectives as follows:  “One of the main aims of EIOPA for the coming years is the preparation of the new supervisory regime for insurance and reinsurance undertakings and particularly the conduct of all the necessary work for the implementation of the EU Directive on the taking-up and pursuit of the business of Insurance and Reinsurance (Solvency II).“[5]

The European Commission believes that the existing requirements will reduce the risk of insolvency to 0.5% over a one-year horizon.[6] As the implementation date of January 1, 2016 approaches and Europe is trying to put together a Capital Markets Union[7], Solvency II raises fundamental questions about its impact on the financial stability of the European insurance industry.

The devil of the new regulatory scheme is in the details. As detailed in a KPMG paper, Solvency II has a significant number of requirements (this may explain why the European Commission has had more than 20 meetings pertaining to the subject since 2009), which are especially challenging for insurance companies.[9]

Misunderstandings about the details of the insurance liquidity risk

It is necessary, however, to read Solvency II in the context of the broader regulatory framework known as Basel III. This is especially true when it comes to liquidity. Basel III includes the Liquidity Coverage Ratio instituted by the Bank for International Settlements to “promote the short-term resilience of the liquidity risk profile of banks.”[11] The European Commission under its delegated authority, issued its own version of the Liquidity Ratio. [12]

Deconstructing the balance sheet through volatility

Solvency II will lead to a transformation of insurance companies’ balance sheets by introducing a series of valuation criteria for individual types of assets and liabilities. The calculation of the necessary capital to meet the requirements is unnecessarily complex. Additionally, the Commission wants a mark-to-market valuation for all assets, independent from the fact that insurance companies keep their assets to maturity.

Solvency II imposes market based valuation of assets and liabilities as well as the capital requirements. However, the interplay between Solvency II and local Generally Accepted Accounting Principles (GAAP) rules may lead to conflicting views on the measurement of risk and return. Differences with accounting rules may also lead to conflicting key performance indicators (KPIs), making optimal asset allocation less straightforward, as certain trade-offs will need to be made. [13]

Why can banks value their bonds at par if they intend to keep them to maturity (core banking), while insurers are not permitted to do so?  The volatility inherent to the markets will affect the assets and make the appreciation of the balance sheet, at best, variable and difficult to manage. It should not be difficult to amend Solvency II to allow insurance companies not to mark to market[14] fixed income assets held to maturity.

Solvency II will push insurance companies toward safe and short-term assets, primarily short-term bonds, which will in turn, restrict the flow of funds to growth areas of the economy. This will force companies to raise their capital requirements unnecessarily. Requiring insurers to apply a rigorous mark-to-market approach ignores their ability to ride long term cycles as long term investors.

The Commission recently adopted detailed prudential rules for banks and insurers to stimulate investment in the economy[15]. As a result of that initiative EIOPA invited (re)insurance stakeholders and market participants to provide their feedback on the discussion paper on infrastructure investments by insurers, published in May 2015. This recent push to have insurance companies invest in infrastructure projects has been immediately questioned by the Bank of England.

The Bank of England (BoE) will scrutinize whether insurers are taking on too much risk by investing in infrastructure projects which may not be suitable for traditional portfolio management. Insurers have been coming under pressure from policymakers to invest in economic growth through building new roads, bridges and telecoms networks, projects that can offer higher yields than government bonds.[16]

There will be a dialectic tension between the objectives to stimulate investment in the economy and follow the conservative route designed by Solvency II.

Why should Insurance portfolios be exposed to full market volatility?

By definition, insurance companies, contrary to banks, are long-term players and long-term investors. Our analysis suggests that the first pillar of Solvency II would impose capital and liquidity requirements that poorly fit the risks of the insurance industry.

While it was widely believed that Solvency I needed to be improved, the new focus on Solvency II, as a result of the financial crisis, could lead to severe unintended consequences. None of the large insurance companies required assistance during the financial crisis and they contributed this to the reduction of Greek debt. Yes, there was AIG, but it was not their insurance businesses that were at stake: the company used the holding company AAA rating to write tens of billions of CDS on mortgage debt. The U.S. Government agreed to repay those commitments to multiple beneficiaries around the world, and did so at par.[17]

Waves of legislation continue to pressure management and absorb valuable resources. Insurance companies started to liquidate their long term positions to comply with Solvency II. They indicate that, under Solvency II, they will sharply reduce their holdings of equity.

It is urgent to correct the marking-to-market requirements that are one of the main weaknesses of Solvency II. Regulatory changes in insurance are constraining the ability of balance sheets, and therefore the ability of insurers to invest in the long run for the good of the economy. As Solvency II will begin implementation in a few months, we can already observe some of the changes. Insurers are reducing long term investments and becoming concerned about equities. This is not favorable to the economy.

The fragile economy and the sovereign indebtedness in Southern Europe are tough enough to tackle. Insurance companies are off-loading equity and subordinated instruments. The cost of carrying them has become unbearable.

As international recognition of the Directive continues to expand, many countries have begun to adopt Solvency II. This includes China, who has already started the implementation.[18] After the equity market chaos of July 2015, Chinese marking-to-market might become challenging. The global impact of Solvency II makes these adjustments even more essential and urgent.

On July 1, 2015 a survey published by State Street of 100 insurance executive and fund managers indicates that overall, 68 percent of insurance executive and fund managers surveyed believe that the pressure of Solvency II on insurers will lead to them placing a greater focus on investment strategies that provide more predictable and uncorrelated returns. However, 14 percent are very concerned that insurers will have a reduced appetite for risk and this, coupled with a low inflation environment, will adversely affect the ability of insurers to meet their liabilities and commitments to clients.[19]

Will Solvency II increase the financial stability of insurance companies? The next few years will clearly be challenging for European insurance companies. The combination of artificially low interest rates, increased indebtedness in Greece, Italy and France above 100% of GDP aggregating more than $ 5 trillion and arthritic growth are likely to lead to unsettled capital markets. The recent Greek third bail-out is there to remind us that it is critical to ensure that Solvency II does not destabilize insurance companies.[20]

As the Transatlantic Treaty approaches, insurers have taken the leadership in requiring the inclusion of financial services in the Treaty. It is an attempt to rebalance the two sides of the Atlantic as the United States has not moved towards a federal insurance regulator.  European negotiators meeting in April 2015 in New York for the ninth round of TTIP negotiations have repeated requests to include a financial services chapter within the comprehensive trade deal. The US remains reluctant, but the position of its insurance sector reinforces the impression that US opposition to financial services in TTIP emanates from regulators rather than industry. [21]

The draft Directive is called Omnibus II because an earlier Directive, known as “Omnibus I” enacted technical amendments to 11 Directives incorporating into banking and securities directives references to the European Supervisory Authorities (the European Banking Authority (EBA) and the European Securities and Markets Authority (ESMA)), thus operationalizing their powers as granted in their founding directives.

Omnibus II does the same for the insurance sector, operationalizing the powers of the European Insurance and Occupational Pensions Authority (EIOPA) via changes to the Solvency II Directive. However, it was decided in the course of the legislative process to also include in Omnibus II elements changing some substantive aspects of the Solvency II regime.  http://europa.eu/rapid/press-release_STATEMENT-14-61_en.htm

[7] This is where the Green paper on the Capital Market Union as well as the related documents can be found: http://ec.europa.eu/finance/capital-markets-union/index_en.htm

[14] The practice of valuing assets and liabilities on market values where observable with a given quality (mark-to market), where not, on market-consistent valuation techniques (mark-to-model). http://ec.europa.eu/internal_market/insurance/docs/solvency/impactassess/annex-c08d_en.pdf