The tradeoffs between facilitating private contracting or imposing a one-size-fits-all solution by regulatory mandate are often unclear. In the field of corporate governance, predicting which approach would be more efficient is particularly complicated. Because the optimal level of shareholder rights may vary across firms, a universal public mandate may be a blunt solution when compared to private contracting. On the other hand, agency problems may impede private market forces, as when entrenched boards resist changes desired by shareholders.

In our new working paper, “Public versus Private Provision of Governance: The Case of Proxy Access,” we study a unique setting in which the adoption of a particular mechanism of governance under these two approaches can be meaningfully compared. In August 2010, the SEC adopted rules that mandated universal[1] proxy access with a set of standardized terms, and that removed obstacles to shareholder proposals that sought expanded terms of access at any given firm. However, the universal rule was subject to a judicial challenge and later invalidated. Notably, the complementary amendment that allowed shareholder proposals regarding proxy access was not challenged. In the absence of a mandated rule, this amendment—which became effective in September 2011—made it possible to institute proxy access at individual companies through shareholder initiatives, a process known as “private ordering.”

This confluence of events allows us to study the two approaches to delivering this mechanism of governance side by side. In particular, variation across firms in stock returns on the day the SEC announced it was staying the effectiveness of the proxy access rules provides us with a benchmark for the relative value of universally mandated proxy access at different firms. Against this benchmark, we study the relative efficiencies and frictions in private ordering based on the roughly 160 shareholder proposals for proxy access submitted over the past four proxy seasons. Following these proposals from submission through voting allows us to study the dynamics of the private ordering process. Importantly, we are able to measure the market’s reaction to shareholder proposals for proxy access because of the unexpected announcement that 75 firms were being targeted with proxy access proposals by the NYC Comptroller’s Office.

In Figure 1 we partition the 75 firms that were part of the NYC Comptroller’s Boardroom Accountability Project (“BAP”) initiative based on their return upon the announcement that universal proxy access would be stayed. Firms that the market believed would benefit the most from mandated proxy access would be expected to have a lower return upon the announcement of the stay, and thus to appear in a lower quintile in this figure. On the y-axis, we plot the average BAP announcement return for each group of firms and find that it varies strikingly with the returns to the stay announcement: among the targeted firms, the firms that the market expected to benefit more from universal proxy access have higher returns upon the announcement of being targeted with a proxy access proposal. Further, we find that the BAP announcement is associated with a positive abnormal return of about 50 basis points for the average targeted firm. From these results we infer that (1) the market expects proxy access to be value-enhancing for the average firm targeted; and (2) conditional on being targeted, frictions in the private ordering process are not expected to fully offset the potential benefits. 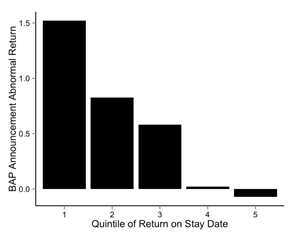 While we find that the market expects private ordering to be value-enhancing, we also uncover evidence that it may not efficiently deliver proxy access at the firms that, based on the stay date returns, were expected to benefit the most from mandated proxy access. Returning to the full sample of 158 proxy access proposals, we study the private ordering process from end to end in order to examine the potential efficiencies and frictions in the process. For example, at the initial stage of submitting a proxy access proposal, the most efficient approach from the market’s perspective would be to target the firms where proxy access would be most value-enhancing. Using the stay date returns as a benchmark for the value of mandated proxy access at different firms, we find that actual targeting did not follow such a pattern—the proposals did not seem to be targeted to maximize either the percentage or dollar value impact.

Another key potential efficiency of allowing private market forces to work out a solution is that the market-based solution can be tailored based on individual circumstances. However, considering the design of proposals, we find that the tailoring of proxy access proposals has been limited. Instead of proposals becoming increasingly tailored, the terms of these proposals have actually been converging to eligibility criteria consistent with the terms of the vacated rule – i.e., proxy access would be available to shareholders or groups of shareholders who had held three percent of the firm for three years. Proposals with these standard terms represented 10 percent of proxy access proposals in the 2012 proxy season, a fraction that has grown steadily to reach 99 percent in 2015. Further, while proxy access proposals have received significant shareholder support overall, proposals with a threshold of three percent for three years have generally received higher voting support, as demonstrated in Figure 2. 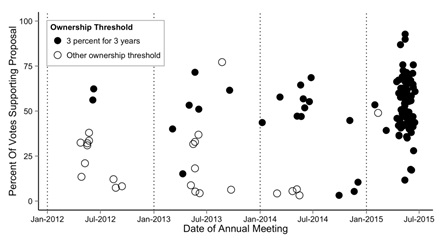 A possible friction in the private approach to delivering a governance mechanism is that entrenched boards may be able to effectively resist market-based solutions. Because resistance is difficult to measure and resistance to initiatives that do not enhance value may be optimal, this friction is difficult to study. However, in this study we have access both to a measure of the value the market places on an initiative—stock returns to the BAP announcement or, more generally, at the stay date—and a relatively clean measure of managerial resistance: a specific type of request for no-action relief from the SEC staff by firms when intending to exclude a proxy access proposal from their proxy materials.

In the 2015 proxy season, one firm facing a proxy access proposal requested no-action relief on the grounds that management planned to present its own proxy access proposal—but with a 9%, five year ownership requirement rather than the 3% for three years proposed by the shareholder—and therefore sought to exclude the conflicting shareholder proposal. After the SEC staff provided no-action relief in that case, many additional companies sought exclusion of these shareholder proposals under the same basis (until the SEC staff later reconsidered its decision). These no-action requests more cleanly reflect management discretion in resisting proposals because they were not a function of defects in the proposals themselves.[2]

Considering only these fully discretionary no-action requests, we find evidence that, on average, the firms where mandated proxy access was expected to be most valuable were more likely to resist shareholder proposals for proxy access. This is true whether we measure the market’s expectation of value enhancement using returns upon the announcement of the stay of the universal rule or upon the announcement of the BAP private ordering initiative. Our results support the notion that the private provision of governance mechanisms may face increased frictions exactly where such mechanisms are expected to be most valuable.

In this study we provide the first systematic academic analysis of the usage and effectiveness of the private ordering process for proxy access in the U.S. This unique setting allows us to directly examine the frictions that affect the private process and to compare it with the alternative of a universal mandate. Overall, we document that the private ordering process provides a functioning, albeit imperfect, channel for the implementation of a governance mechanism, providing hope for the market-driven institution of governance tools more broadly. Notably, this channel lacks some of the theoretical strengths of a market-driven solution. It remains to be seen if the increased engagement by key institutional shareholders will usher in a new era of proxy access.

[1] We use the term “universal” throughout to represent the broad application of the rule to all companies subject to the SEC’s proxy rules, including, for example, all domestic exchange-listed public companies.

[2] Because no-action relief generally hinges on particular proposal drafting choices or procedural deficiencies, such requests overall do not represent a clean measure of the strength of management opposition. The specific type of no-action requests that we use in our tests argued that Rule 14a-8(i)(9) regarding conflicting proposals would allow exclusion (without regard to the details of the shareholder proposal).

The preceding post comes to us from Tara Bhandari, Peter Iliev, and Jonathan Kalodimos. Tara Bhandari and Jonathan Kalodimos are Financial Economists at the U.S. Securities and Exchange Commission. The Securities and Exchange Commission, as a matter of policy, disclaims responsibility for any private publication or statement by any of its employees. The views expressed herein are those of the authors and do not necessarily reflect the views of the Commission or of the authors’ colleagues on the staff of the Commission. Peter Iliev is an Assistant Professor of Finance at Pennsylvania State University’s Smeal College of Business.  This post is based on their article, which is entitled “Public Versus Private Provision of Governance: The Case of Proxy Access” and available here.