Stock market prices and the market for corporate control are both crucial elements of the corporate governance matrix within which public companies operate. Share prices constitute highly visible signals of investor perceptions of corporate performance that provide cues for governance responses by directors, managers and shareholders. If not neutered by defensive tactics, the market for corporate control can be a potent corrective mechanism in circumstances where the incumbent management team is failing to create shareholder value, with potential acquirers seeking to obtain control on the assumption they can improve matters. Share prices in turn play an important role in the operation of markets for corporate control because the current stock price, as a market generated estimate of the firm’s value under its incumbent management team, will do much to shape decisions by a would-be acquirer.

Given that stock market prices and the market for corporate control are crucial corporate governance elements one might anticipate that the manner in which each developed historically would well understood. This is not the case. Correspondingly in “Stock Market Prices and the Market for Corporate Control” we explore the evolution of takeovers and share prices. Our research, which we presented at a 2014 conference on share prices at Columbia Law School and which is forthcoming in the University of Illinois Law Review, provides evidence on how the market for corporate control developed between 1900 and the mid-1960s and analyzes the extent to which trends affecting the manner in which shares were priced impacted upon takeover activity.

Our research yields novel insights concerning both the pricing of shares and control contests. For example, we find that securities markets a century ago exhibited certain efficiency features familiar to present day readers . One might presume that in the absence of modern information technology, market pricing of shares would have been a primitive affair as the 20th century got underway. We show the scale and depth of information impounded into share prices indeed was less substantial than it subsequently became, meaning prices were likely to be less accurate than would be the case subsequently. On the other hand, during the opening decades of the 20th century stock prices reacted sharply to such market news as there was in a way that would be familiar to modern observers. Correspondingly to a surprising degree the stock market was “informationally” efficient, in the sense that publicly available information was impounded promptly.

The historical patterns we identify concerning share prices help to account for various empirical trends for control contests our data reveals. This is the case, for instance, with our most striking empirical finding, which concerns a change of takeover technique adopted by bidders. In the opening decades of the 20th century, a raider seeking to obtain control of a target by purchasing a majority of the shares rather than by way of a proxy contest would almost always launch an open market bid (see below for data on hostile offers and open market bids in Figure 1). After a hiatus in merger activity occurring during the 1930s and 1940s, the cash tender offer became the tactic of choice in the 1950s and the 1960s. 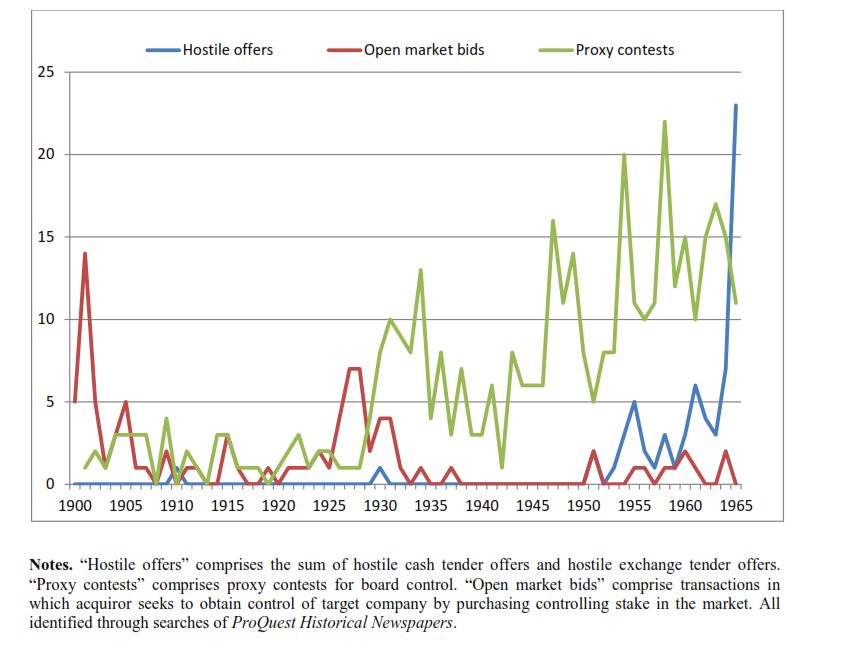 The operation of the stock market likely helps to explain the switch in tactics. An OMB can be a ruinously expensive way to acquire control because the target’s share price can rise dramatically as a result of the acquirer’s buying activities, particularly if investors assume that the rising share price reflects improving fundamentals or deduce that control of the target is “in play”. The tender offer is a pragmatic response through which an acquirer can seek to contain costs by offering a fixed price to those who tender their shares.

Given the potential advantages tender offers provide, why were OMBs used during the opening decades of the 20th century? Our analysis of the historical development of share prices suggests that because of the manner in which the stock market operated as the 20th century got underway, the problems afflicting OMBs were considerably less acute than would be the case in later decades. Part of the reason was that bidders had scope unavailable today to rely on market manipulation techniques to disguise the buying of shares that was occurring. Also, even the savviest investors would have struggled to deduce from share price fluctuations that an OMB was underway, in large part because companies at the beginning of the 20th century were disclosing much less financial information than their counterparts later in the century.

While our analysis indicates that developments concerning share prices could be important to the operation of the market for corporate control the account of takeover history we provide in our research is only partial. For instance, attempts to secure control by way of proxy contests outnumbered control contests oriented around the acquisition of shares throughout the entire period we focus on (see again Figure 1). Our analysis of share prices does not readily explain the pattern. Bidders quite sensibly might have been biased against trying to take control of companies by acquiring shares as the 20th century got underway because share prices were a less informative and reliable barometer of firm value than they would become in later decades. The popularity of proxy contests continued unabated, however, as share prices became a more accurate measure of corporate fundamentals. Correspondingly, while our research sheds light on key features of takeover activity by focusing on the manner in which shares were priced, important issues concerning the historical development of the market for corporate control merit investigation in future research.

The preceding post comes to us from John Armour, the Hogan Lovells Professor of Law and Finance, and Brian R. Cheffins, the S J Berwin Professor of Corporate Law at the University of Cambridge. The post is based on their article, which is entitled “Stock Market Prices and the Market for Corporate Control” and available here.