My recent article, Size Matters: Commercial Banks and the Capital Markets, fills in the rest of the story—a facet of bank regulatory reform and its effect on the capital markets that legal scholarship has largely overlooked.

In order to offset lost revenues, investment banks pursued riskier businesses, growing their principal investments and increasing the amounts they borrowed in order to finance them.  The investment banks’ aggregate risks—as measured by each firm’s published Value at Risk (VaR)—grew substantially following repeal of the Glass-Steagall Act.  Leverage grew as well.  Some estimates show that debt-to-equity ratios on average jumped from 22:1 to 33:1 within three years following amendment by the Securities and Exchange Commission (SEC) of the broker-dealer net capital rules.  In effect, as commercial banks entered the investment banking business, investment banks began to assume the features of commercial banks—in particular, a reliance on short-term borrowing in order to finance longer-term (and riskier) investments.  For investment banks, combining the two—greater risk-taking and leverage—was lethal and eventually triggered the financial meltdown.

What is particularly interesting is that, except for Bear Stearns, reported VaR relative to the investment banks’ assets and relative to their equity remained largely constant over the period, as depicted by the graphs below. 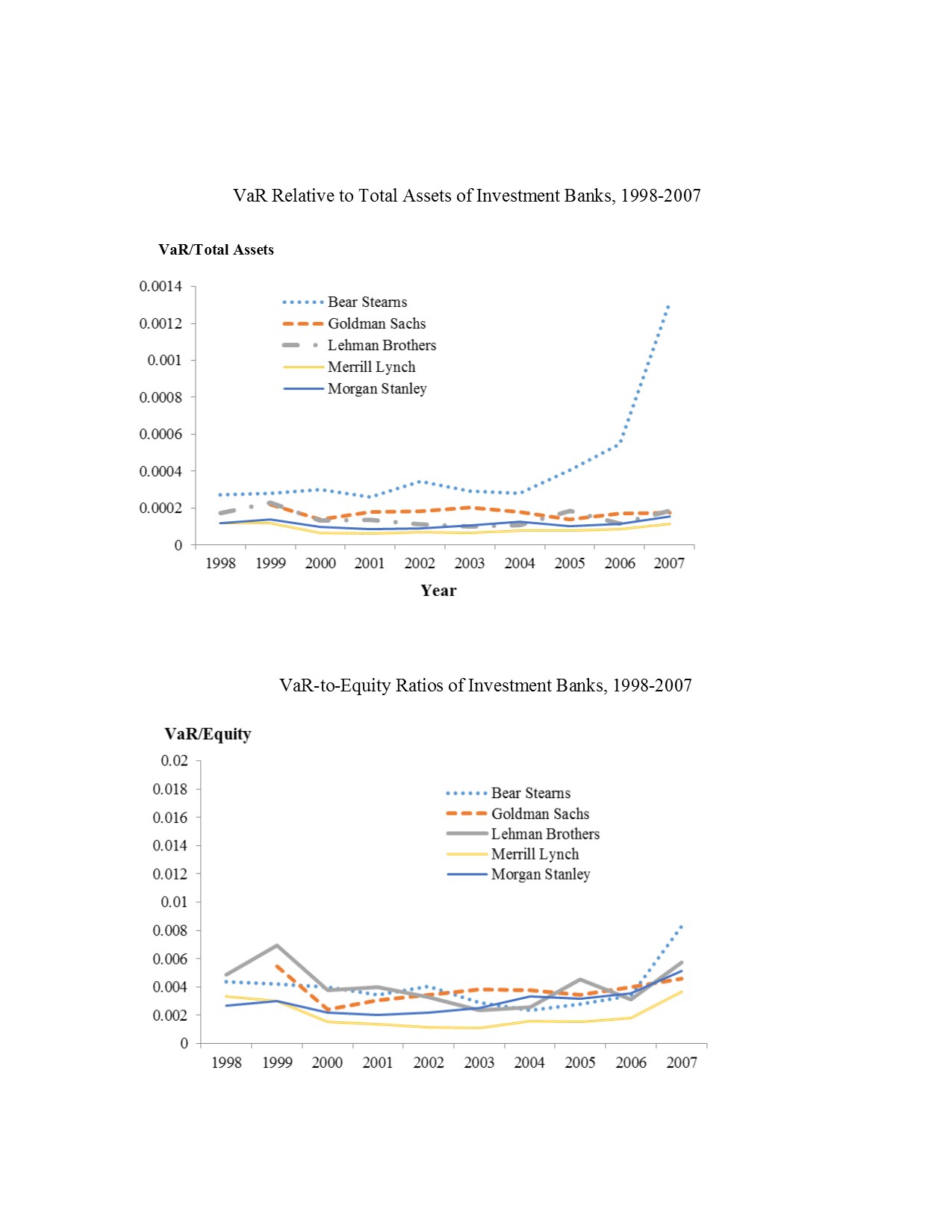 For Bear Stearns, VaR/total assets and VaR/equity increased significantly after 2004.  Based on that rapid rise, it is unsurprising that Bear Stearns was the first investment bank to fall into trouble.

For the remaining investment banks, the published VaR ratios remained largely constant.  On its face, this would indicate that on average the riskiness of the firms’ businesses remained unchanged on a per-dollar-of-assets and per-dollar-of-equity basis.

More likely, however, the investment banks were less familiar with the new risks they assumed, resulting in VaR being understated.  For example, virtually all investment banks increased their principal investment and private equity activities.  Some also expanded their block-trading business—buying a large amount of stock from a single seller and then re-selling the shares, often in the public market—taking on greater concentrations of risk around the positions they held.  Moreover, as investment banks grew their mortgage securitization businesses, some acquired residential mortgage loan originators and servicers.  By doing so, they could source loan products at a lower cost, but at the risk of a drop in the value of those assets before they were repackaged as part of a securitization and sold to investors.  Each of the new business lines involved new or different risks, which may not have been properly considered in calculating VaR or may have been in non-broker-dealer entities whose risks were not reflected in published VaR.  Consolidation in the financial industry and higher levels of interdependency across financial firms through, for example, greater reliance on short-term interbank lending and derivatives trading,  also increased the likelihood that the failure of one large firm would disrupt others.  That risk also was not reflected in VaR.  The end result was a substantial rise in investment bank risk-taking, not reflected in the firms’ published risk measures, whose effects eventually spilled over to the commercial banks.

What does this suggest?  As the financial markets continue to evolve, it may be difficult for firms that perform similar functions—financial intermediaries that bridge suppliers and consumers of capital—to work side-by-side without greater coordination across regulators.  Of course, it is possible that some or all of the changes I described would have arisen even without passage of the Gramm-Leach-Bliley Act.  But I am skeptical, largely because they arose or became more acute as a result of consolidation in the financial markets—an outcome of the collapse of the wall separating commercial banks from other businesses following passage of the Gramm-Leach-Bliley Act.  More to the point, they all arose from changes in bank regulation that affected the capital markets.  The SEC and other capital markets regulators were not charged with prudential risk regulation in the same way as the commercial bank regulators.  And the bank regulators’ principal focus was on commercial bank stability and, to that end, improving bank profitability, as well as diversifying sources of revenue.  Those regulators were not charged with overseeing investment banks, nor did they have access to investment bank information in order to do so.  As a result, they focused on commercial bank stability, not on the potential for changes in regulation to negatively affect non-banks and the capital markets.

The Financial Stability Oversight Council (FSOC), created in July 2010, provides some coordination among financial regulators, principally in order to identify risks to U.S. financial stability arising from activities in or outside the financial markets, including making recommendations to primary regulators in the face of new or increased risks among financial firms and markets.  It remains to be seen whether FSOC oversight is enough.  The problems that arose prior to the financial crisis might not have occurred if there had been a single regulator responsible for the financial markets as a whole, rather than different regulators responsible for different segments.  Such a regulator could balance the costs and benefits of regulatory change across the marketplace, without the tension characterizing commercial and investment bank regulation both before and after passage of the Gramm-Leach-Bliley Act.  Regulators would no longer pursue siloed policies that lower risk in one segment of the financial markets potentially at the expense of increasing it in another.  And, to the extent regulation continues to evolve, a market-wide assessment of those changes may assist in sidestepping the kinds of coordination problems that led up to the financial crisis.

The preceding post comes to us from Charles K. Whitehead, the Myron C. Taylor Alumni Professor of Business Law and Director, Law, Technology & Entrepreneurship Program at Cornell Law School.  The post is based on his article, which is entitled “Size Matters: Commercial Banks and the Capital Markets” and available here.