Once again, NML v. Argentina is in the spotlight. Sovereign debt’s “trial of the century”[1] has been the focal point of intense academic and policy debates, prompted a Supreme Court decision, and even triggered a contested default by Argentina in 2014. But the spotlight now points in a different direction. With a newly elected government, Argentina’s decade-long standoff with holdout creditors is set for negotiations—and potentially—a final settlement. In our article, we analyze key economic and legal factors underlying the NML litigation, with a particular emphasis on issues relevant to a potential settlement.

Argentina’s debt imbroglio stems from a devastating economic crisis in 2001/2, which led to an $81 billion debt default, the largest-ever sovereign default to that point. Unlike corporations and municipalities, sovereigns lack access to a formal bankruptcy system.[2] Sovereign insolvencies are resolved through voluntary restructuring. In a typical sovereign restructuring, defaulted bonds are swapped for new debt, or “exchange” bonds.[3] Sometimes restructurings involve equity-like “sweeteners” (like Argentina’s growth-linked warrants explained below) to offer participating creditors upside when the sovereign debtor’s economy recovers.

Argentina’s exchanges in 2005 and 2010 netted 93% creditor participation, but some creditors—the “holdouts”—sat out or litigated for a better deal. Distressed debt hedge funds have spearheaded holdout litigation against Argentina. Currently, of 150 bonds that fell into default during Argentina’s economic collapse, 126 still have holdouts. Many of the holdouts are concentrated in just 7 of those bonds, which represent almost 30% of total holdout principal. But another 74 bonds have holdout rates between 5 and 20%. Chart 1 illustrates holdout rates across Argentina’s defaulted bonds after the 2005 and 2010 exchanges. 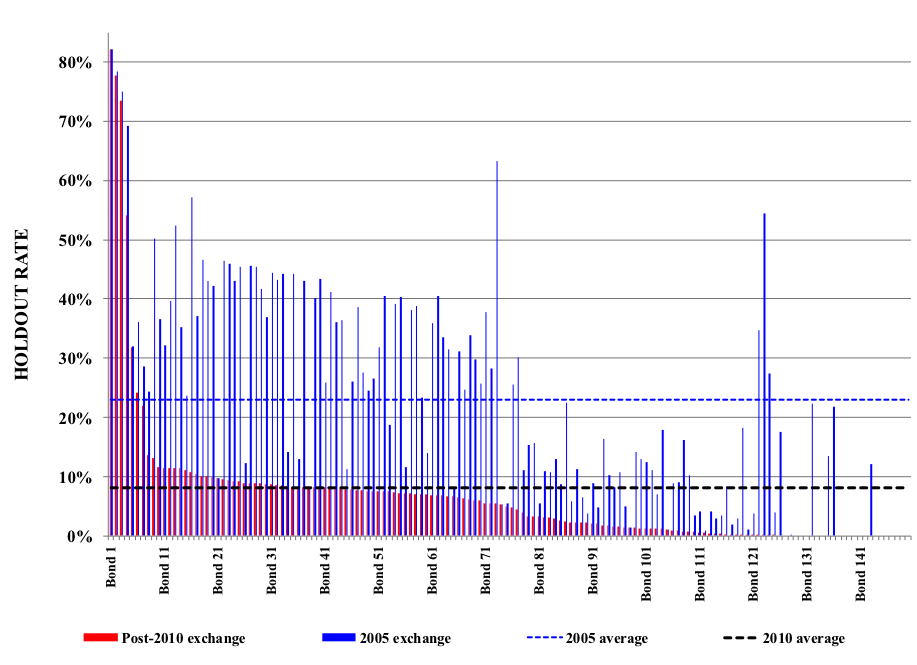 Early in the NML litigation, courts were sympathetic towards Argentina’s legitimate interests in restructuring, even supporting efforts to that end. But creditor claims piled up after the 2005 exchange and patience waned in the face of Argentina’s defiance of court orders. Eventually, based on a controversial interpretation of the pari passu (equal treatment) clause in Argentina’s bonds, the district court issued super-charged injunctive relief.[4]

The so-called “ratable payment” injunctions prevented Argentina from paying other creditors until holdout creditors were paid in full. Adding to the controversy, these injunctions cast a very wide net. To ensure compliance, the injunctions were targeted not just at Argentina, but also at financial intermediaries and other third parties. As a result, a number of innocent actors—including financial service providers and exchange creditors—have become collateral damage in the court’s enforcement efforts.

The Value of Holdout Claims

Together, the current holdout bonds had a face value slightly above $6 billion in 2001. Estimates now value Argentina’s holdout claims in the neighborhood of $20 billion, due in part to massive interest liabilities. At 9%, New York’s statutory pre-judgment interest rate contributed to the accumulation with rates well above market. Interest liabilities vary dramatically among holdouts because, once the court enters into final judgment, the federal post-judgment rate applies (a floating Treasury bill rate) instead of the New York’s generous pre-judgment rate (9%). As a result, the earlier a plaintiff obtained a judgment, the less the claim is currently worth.

Focusing on the seven bonds with the highest holdout rates, we take a closer look at the components of holdout claims. For these seven bonds, the original face value went from about $1.7 billion to between $4.3 and 7 billion, depending on when judgments were obtained. Interest liabilities alone for those seven bonds amount to between $2.6 and 5.3 billion. Table 1 illustrates the components of holdout claims while comparing returns for judgments obtained in 2008 versus 2015. 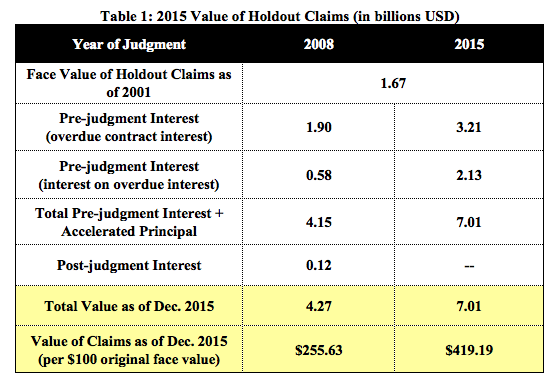 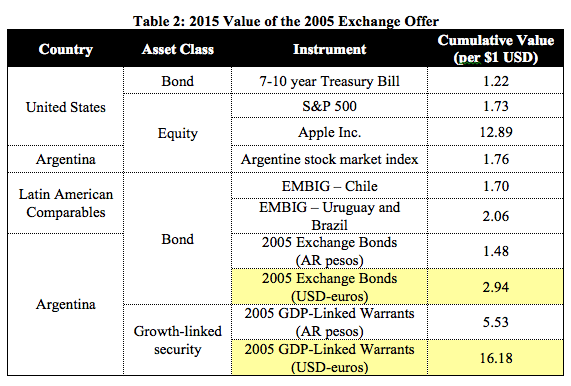 Relevant valuations—like the value of the 2005 exchange—and practical matters alike will frame settlement negotiations. Between scarce currency reserves and political sensitivities surrounding the holdout situation, Argentina’s government has a delicate path to navigate. After winning in court, the holdouts have judgments in hand for the full value of principal and interest due on their bonds. But, practically speaking, a settlement is more likely to resemble a restructuring, with a haircut and the issuance of new bonds. Fairness and legitimacy, though not crucial in a typical contractual dispute between sophisticated parties, will figure prominently in settlement negotiations. Returns on specific components of holdout claims—for instance, pre-judgment interest liabilities—will be the subject of closer scrutiny in the settlement negotiations.

The time has come for a settlement between Argentina and the holdouts. Judge Griesa has correctly recognized on many occasions that settlement is the only way out. Indeed, most sovereign debt disputes settle out of court for less than the full amount. And since taking over in December, officials in Argentina’s new government have expressed commitment to negotiating. But challenges remain.

Finding a reasonable value for settling the claims that holdouts can accept and Argentina can afford—financially and politically—will not be easy. But the injunctions pose another serious impediment to settlement. As they currently exist, the injunctions allow even just one holdout creditor to hijack payments from Argentina to other creditors. This creates serious incentive problems for both Argentina and the holdouts considering participation in a settlement. The injunctions mean that unless the settlement achieves 100% participation—an unlikely scenario—one holdout among the holdouts could derail a settlement.

Atomization among the holdouts only exacerbates this problem. As illustrated above, holdouts are spread far and wide across 126 bonds. Merely locating all the holdouts is a tall order. Coordinating their action could be even more difficult. If Argentina’s open defiance of court orders caused the court to resort to broad and drastic injunctive relief, good faith efforts towards a negotiated settlement could prompt the court to reconsider the NML injunctions.

The preceding post comes to us from Juan J. Cruces, Professor of Finance and Economics at the Universidad Torcuato Di Tella Business School, and Tim Samples, Assistant Professor of Legal Studies at the University of Georgia, Terry College of Business. The post is based on their recent article, entitled “Settling Sovereign Debt’s ‘Trial of the Century’”, which is forthcoming in the Emory International Law Review and available here.