I first hypothesize that once a certain threshold of gender balance is crossed it increases the productivity of a board. This hypothesis is based on the critical-mass theory introduced by Kanter (1977), who argues that only once the minority gender comprises at least 35% of a team, thereby creating a gender-balanced team, will gender diversity enhance team performance. Kanter argues that below this threshold, the minority gender members are not as productive as they could be, because they are reduced to symbolic representatives, or tokens, of their social category. Based on the critical-mass theory, Rosener (1995); Shrader, Blackburn, and Iles (1997); and Kramer, Konrad, and Erkut (2006) argue that in board meetings, a critical mass of at least three women directors (which constitutes approximately a third of most boards) will catalyze board activeness/performance.

I tested the critical mass theory empirically by using confidential data made available to me—detailed minutes (that document the statements made by every participant) of board and board-committee meetings of eleven for-profit government business companies in Israel. A unique feature of these boards is that approximately 37% of their directors are women, which is substantially more than what is usual in most boards around the world. For each company, minutes for a period of one year are examined. The minutes aggregate to 4,758 pages, which were carefully coded. Board activeness is measured using two variables: for each of the 2,459 issues discussed, I document whether the board (1) requested further information or an update and (2) took an initiative, such as proposing what steps should be taken. These two actions reflect the intensity of the boards’ work, both in monitoring (as measured by the first variable), and in being involved in managing the company (as measured by the second variable). 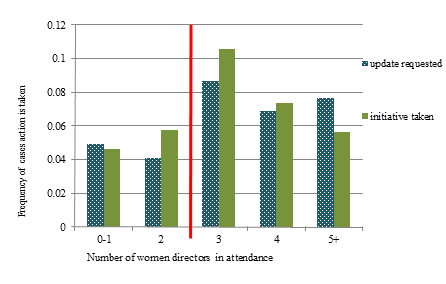 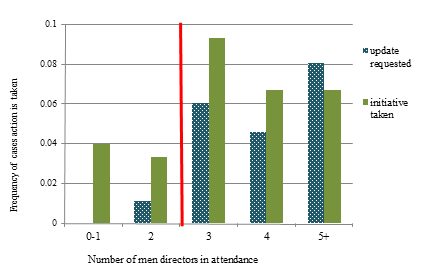 Finally, I focus on periods when boards are especially needed: around CEO turnover. I first examine 34 for-profit government business companies, from 2000 to 2009. The results reveal that firms that have weak financial performance and whose boards include a dual critical mass are significantly more likely to experience CEO turnover, indicating that, one way or the other, the CEO will find his way out when the firm is underperforming. Similarly, using the minutes data, I find that if a dual critical mass is in attendance, boards are particularly active at their meetings during periods in which companies are in the process of replacing their CEOs. This suggests that gender-balanced boards are particularly likely to step in when they are most needed.

To conclude, this study document that boards with a dual critical mass are more active than boards without such a dual critical mass, particularly because the minority gender (women) is more active when the board includes a critical mass of their own gender. Gender-balanced boards are also particularly active during crucial times, such as CEO turnover. These results suggest that gender-balanced boards may be invaluable especially when a board’s involvement is needed.

The preceding post comes to us from Miriam Schwartz-Ziv, Assistant Professor of Finance at the Eli Broad College of Business at Michigan State University.  The post is based on her article, which is entitled “Gender and Board Activeness: The Role of a Critical Mass”, forthcoming in the Journal of Financial and Quantitative Analysis and available here.