Many prominent business executives and legal scholars are convinced that the American economy will suffer unless hedge fund activism with its perceived “short-termism” agenda is significantly restricted. Conversely, shareholder activists and their proponents claim they function as a “disciplinary mechanism” to provide management oversight and are instrumental in mitigating the potential agency conflict between managers and shareholders.

Earlier studies have shown that when institutional investors, particularly mutual funds and pension funds, follow an activist agenda, they do not achieve significant benefits for shareholders. Nevertheless, hedge funds have increasingly engaged in shareholder activism and management supervision that differs fundamentally from previous activist efforts by other institutional investors. Unlike mutual funds and pension funds, activist hedge funds are able to influence corporate boards and management teams due to key differences arising from their organizational form and incentive structures.

Hedge funds employ highly incented managers who control large, unregulated pools of capital. Because they are not subject to regulation that governs mutual funds and pension funds, hedge funds can hold highly concentrated positions in a small number of companies and use leverage and derivatives to extend their reach. In addition, hedge fund managers do not experience conflicts of interest because they are not beholden to the management of the company whose shares they hold. Accordingly, hedge funds are better positioned to provide oversight in the corporate boardroom than other institutional investors.

In a recent paper titled “The Long-term Efficacy of Activist Directors”, I find statistically meaningful empirical evidence to suggest that hedge fund activism generates substantial long-term value for target companies and its long-term shareholders when they function as a “shareholder advocate” to provide oversight of management through active board engagement. Furthermore, contrary to conventional wisdom and the prevailing “myopic investor” narrative, hedge fund activists that seek board representation are focused on long-term corporate initiatives to increase shareholder value rather than a perceived short-term agenda.  Furthermore, it’s very common for the newly constituted and majority supported “activist-endorsed” board to seek replacement of the incumbent management team to accomplish the activist’s strategic plan as opposed to forcing a “sale of the company” ex post the board seat grant date.

Since shareholder activism has evolved significantly over the past 25 years, it’s imperative to ensure that the debate parameters properly reflect the changing financial markets. First, there are two types of shareholder activism: governance-focused activists and economically-motivated activists. Most, if not all, academic studies have not clearly delineated between these investment styles. I define governance-focused activism as dissident shareholders who submit shareholder resolutions to effectuate a change to the governance structure of a company (i.e., change from a plurality voting system to a majority voting standard with respect to director elections) or to make recommendations with respect to executive compensation.

The 2015 proxy season was largely dominated by proxy access and “say-on-pay” proposals. Furthermore, some pension funds put pressure on companies to improve their corporate social responsibility practices. Thus, researchers attempting to measure financially related effects of shareholder activism may not find any impact on the financial performance or corporate governance measures due to the presence of socially driven shareholder activism.

Economically-motivated activism differs fundamentally from governance-focused activism with respect to strategic objectives and the tactics used during a campaign. Economically motivated activists are focused on changing the strategic direction of the corporation and/or the capital structure via returning excess cash to the shareholders. To be sure, governance-focused activism facilitated the proliferation for the economically-motivated activist to launch successful campaigns. Since all institutional shareholders are not homogenous, it’s imperative to recognize that not all shareholder activists are identical. We need to delineate between the intentions and motivations of activists before concluding that they are all detrimental and destroy long-term value.

Second, the vast majority of activist interventions studies is primarily constructed from Schedule 13D filings, the mandatory federal securities law filings under Section 13(d) of the 1934 Exchange Act. That law states that investors must file with the SEC within 10 days of acquiring more than 5% of any class of securities of a publicly traded company if they have an interest in influencing the management of the company. The presumption is a shareholder who files a 13D is unequivocally motivated to change the strategic direction of the company. However, I claim that this motivation is not always the case. As previously noted, some activist campaigns are centered on corporate governance reforms (i.e., board declassification, removal of shareholder rights plan, etc.) and not on meaningful long-term strategic or operational changes to the company. I contend that any shareholder with sincere conviction to challenge the current operational and strategic direction of a company would, ultimately, seek board representation if their suggestions or demands were not supported by the company’s incumbent management. Therefore, I view board representation as a signal of the activist hedge fund’s long-term commitment to the company.

In this study, I start with a much more expansive sample of activist interventions. My hand-collected dataset of shareholder activist events includes 5,728 interventions from 1984-2014. Of those, 4,295 (75%) filed a 13D. However, approximately 27% of all activist interventions were focused on board engagement, either through a proxy contest or through a non-proxy contest dissident campaign that resulted in board representation via private negotiations with the target management team and its board of directors. To be sure, nearly three-quarters of activist interventions did not seek board representation to provide board oversight of the management team. Moreover, GAMCO Asset Management, a hedge fund founded by Mario Gabeli, has filed 493 13Ds since 1996. However, it has launched only 18 proxy fights (4%) and won board representation only 10 times (2%) to date. In contrast, Carl Icahn has launched proxy fights and won board seats at eBay, Genzyme, Time Warner, and Yahoo! without filing a 13D.

Accordingly, I claim that there are numerous 13D filings of activist interventions that otherwise include well performing companies with strong management in which a dissident was not compelled to seek board representation to actively monitor management and function as a disciplinary mechanism. Additionally, there are approximately 100 activist interventions that led to board representation without the activist filing a 13D. Therefore, I assert that the optimal dataset to test empirically the long-term efficacy of hedge fund activism should be based on board representation by a hedge fund activist and not merely the fact that a shareholder crossed 5% ownership and might seek (not will seek) to influence strategic change at the company. Moreover, an activist willing to incur significant financial cost of a proxy fight that is not borne by all shareholders has genuine conviction that the company requires strategic change that management team is either unwilling to or incapable of executing without shareholder interference.

To test empirically this proposition, I applied numerous econometric methodologies to investigate the long-run market performance of companies that had hedge fund activist board representation. First, I constructed buy-and-hold portfolios of stocks with respect to hedge fund activism from 1994-2014[1]. To address and mitigate the concern regarding self-selection bias, I compare the results of the Treatment Group (“Hedge Fund Activist Board Representation”) to selected Control Groups. The Treatment Group is defined as all target companies that granted at least one board seat to a dissident hedge fund. Control Group I is characterized as target companies of all proxy fight campaigns that did not result in board representation during the same period and Control Group II is comprised of target firms that granted at least one board seat to a “non-hedge fund” dissident shareholder during the same time period. 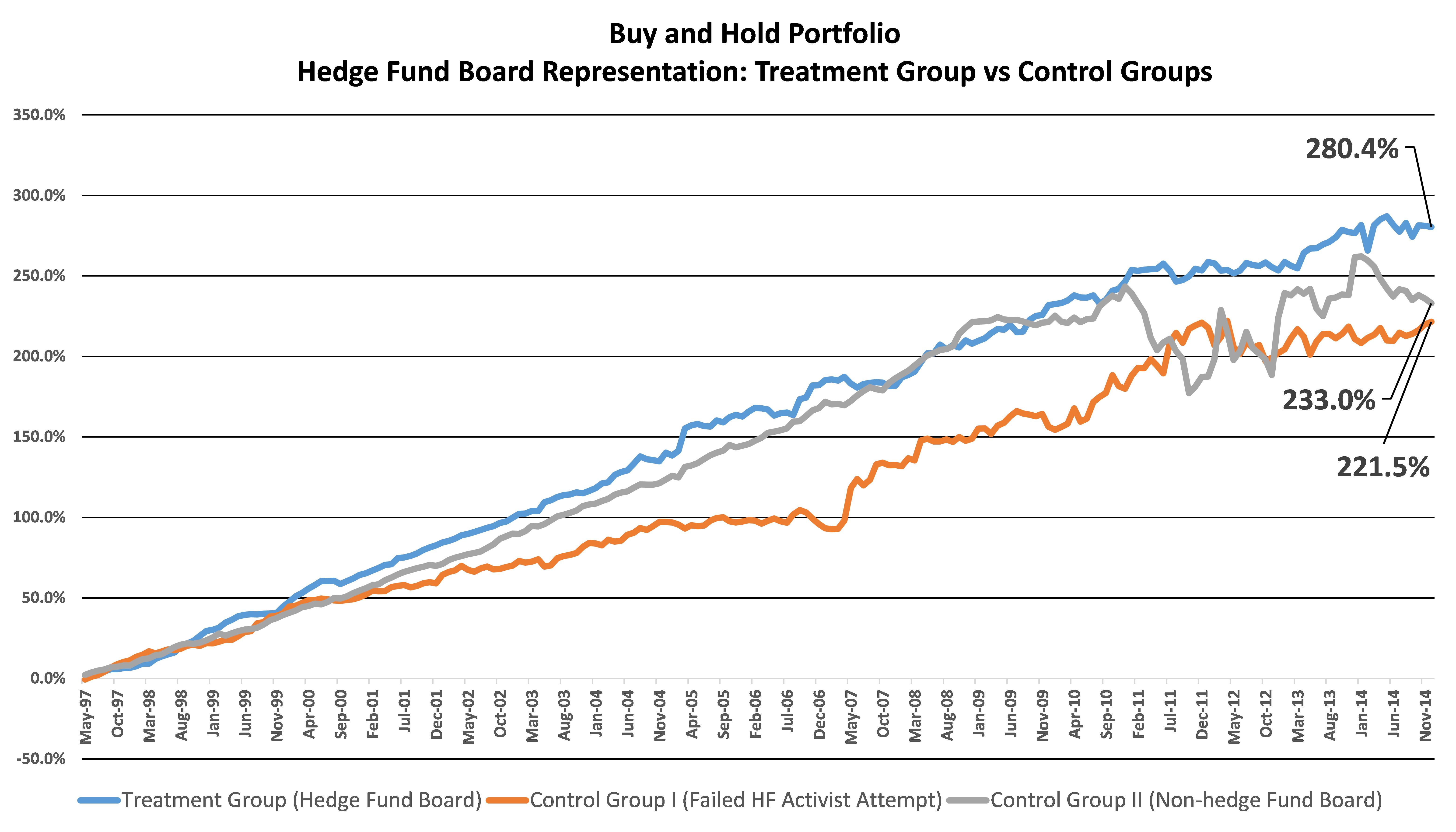 Next, I examine the Treatment Group (companies with hedge fund activist directors) and compare the results to a portfolio of Matched Firms (similar companies by size and industry) during the same time series.   As of December 31, 2014, the long-term buy-and-hold portfolio returns to shareholders of the Treatment Group was over 260%. Conversely, a portfolio of Matched Firms only generated 185% during the same period. 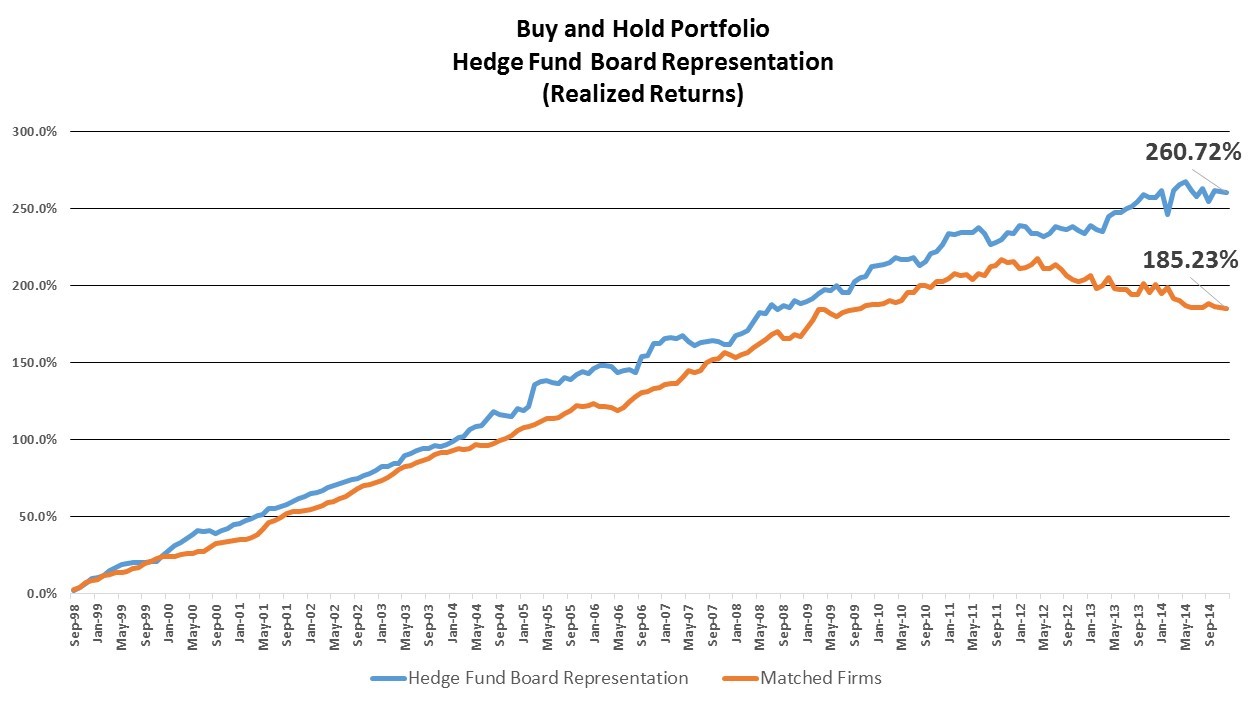 Finally, I investigated total shareholder return (TSR), a commonly used financial measure, for companies with hedge fund activist directors and compared the results to a portfolio of Matched Firms or comparable companies during the same period. Figure III illustrates a significant under-performance of target firms of the Treatment Group prior to the hedge fund activist joining the board compared to comparable companies that did not experience shareholder activism. However, there is an immediate improvement with respect to the return profile of target companies following the board seat grant date relative to industry peers. Five years after the hedge fund activist director joined the board (Event (t0)), the portfolio of target firms experienced a 186% TSR, whereas, matched firms yielded 171% TSR. This substantiates that hedge funds generate long-term value for the target companies and its long-term shareholders when they provide management oversight via board representation. Moreover, there was no reversal of financial performance up to five years following the activist director joining the board which clearly refutes the “market over-reaction” hypothesis that has been asserted by opponents of shareholder activism. 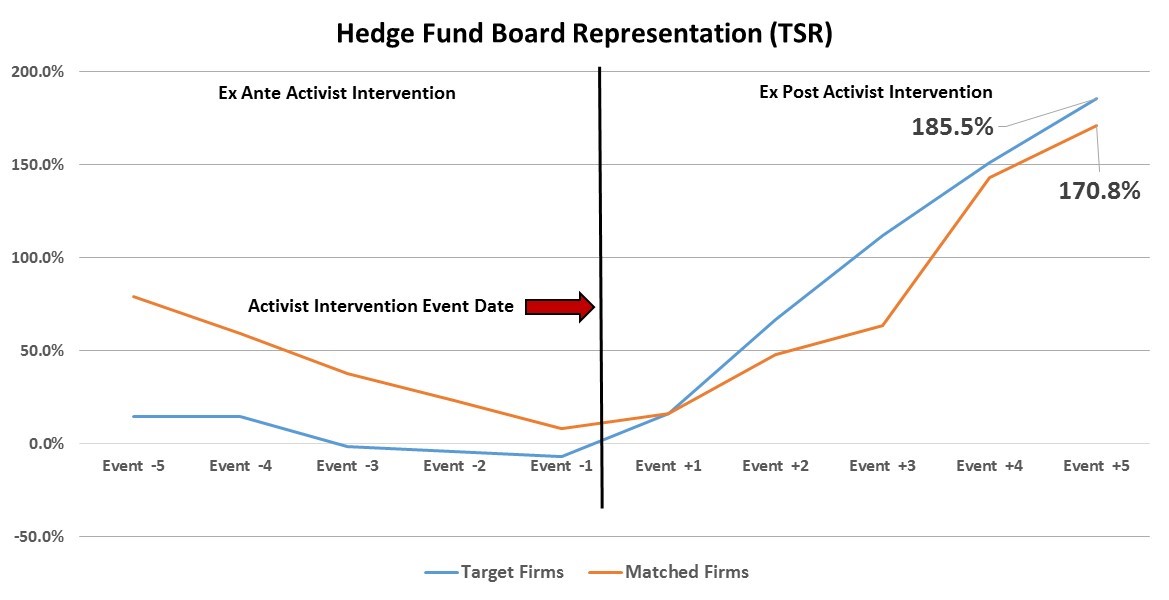 In summary, the foregoing results suggest that hedge fund activist seeking board representation generate positive returns for target companies that do not revert up to a five years following the activist director joining the board. Therefore, the evidence clearly refutes the market over-reaction hypothesis and supports the proposition that hedge fund activists create long-term value for target firms and its long-term shareholders when they function as a disciplinary mechanism to provide oversight of management via board representation.

[1] In addition to buy-and-hold portfolio (BHAR) construction, I examined Calendar-time Portfolio Abnormal Returns (Jensen’s Alpha) for a 5-year period ex post an activist intervention. Similar to BHAR, in each calendar month over the entire sample period, a portfolio was constructed comprising all firms experiencing the event within the previous month. I report the long-term abnormal returns associated of Target Firms of all activist interventions as well as report regression estimates and level of significance from both equal-weighted and value-weighted calendar-time portfolio regressions. The portfolio holding period was determined based on actual trading days and indicates the holding period in years relative to the date that the board seat(s) was granted. For example, the portfolio with holding period [Event +1], will continually add Target Firms that have added an activist/dissident shareholder to their respective board during the year from the date the seat was granted. The portfolio will hold these firms until the earlier of December 31, 2014, a delisting date as a result of a Chapter 11 filing or a sale/merger.

The preceding post comes to us from Shane Goodwin, Visiting Fellow of Business Economics at Harvard Business School.  The post is based on his paper, which is entitled “Corporate Governance and Hedge Fund Activism” and available here.