Herd behavior is a widely used notion met in different contexts and disciplines, from neurology and zoology to sociology, psychology, economics and finance. In economics and finance the term herd behavior usually suggests the process where agents tend to imitate each other’s actions and/or base their decisions upon the actions of others. This behavior may not always indicate irrational agents. For instance, market participants may infer information from actions of previous participants, investors may react to the arrival of fundamental information or analysts and institutional investors may herd in order to protect their reputation. For example, Bikhchandani and Sharma (2001) make a distinction between ‘spurious’ herding which is motivated by changes in fundamentals, and ‘intentional’ herding where there is an intention by agents to copy each other’s actions. On the other hand, it has also been suggested that economic agents may simply be irrational and herd behavior can arise as the consequence of psychological and/or social conventions.

Our study examines investors’ herd behavior in the euro area sovereign bonds market towards the consensus during the European financial crisis. In 2010 Greece ran into a serious fiscal crisis and negotiated a European Union / International Monetary Fund (EU/IMF) bailout package along with a series of fiscal austerity measures. Not long afterwards, a further aid package was agreed for Ireland and Portugal. As a result, money and capital markets experienced increased volatility and turmoil with bond and stock prices falling sharply. For instance, bond yields rose from approximately 5% in 2009 to approximately 30% by 2012 for Greece, and from 5% in 2009 to approximately 10% to 15% by 2012 for Ireland and Portugal; the yields for Spain and Italy also increased significantly during the same period (see Figure 1).

During the crisis many EU officials, market participants and the media often argued that herding behavior on the investors’ part was (to some extent) responsible for the escalation of the crisis[1] and the spillover of volatility from the countries that received financial packages to other countries. Partly motivated by this observation, our study examines the extent to which bond market investors engaged or not in herding behavior during the bond market turmoil, and if so, whether this behavior was the result of behavioral convergence (i.e. irrationality) or whether there was a simple rational, collective reaction to fundamental macroeconomic signs.

More specifically, our dataset comprises of eleven euro area countries, namely: Austria, Belgium, Finland, France, Germany, Greece, Ireland, Italy, Spain, Portugal and the Netherlands. The sample countries are divided in two sub-sets: the first one consists of the Eurozone countries that run into financial difficulties during the recent crisis (Portugal, Ireland, Greece) with the addition of Italy and Spain (denoted for simplicity as the Southern markets), while the second contains Austria, Belgium, Germany, Finland, France and the Netherlands (denoted for simplicity as the Northern markets). The investigation period spans from January 2000 to January 2013.

Contrary to popular belief, overall, we find limited empirical evidence of herding in European government bond prices either before or after the EU crisis. Our evidence, however, strongly supports the notion of ‘spurious’ herding (i.e. herding motivated by changes in fundamentals). For example, we find evidence consistent with bond return clustering during the financial crisis on days when important macroeconomic information is released and when there are changes in the US Federal Funds rate and the Bank of England rate. Further tests that rely on the decomposition of the herding related measure of cross-sectional absolute deviation of returns reinforce this finding and reveal herding due to changes in fundamental factors/information during the crisis. Finally, our results indicate that during the recent financial crisis there were indeed herding spill-over effects running, however, with a direction from European countries with no financial difficulties (Northern European markets) to the financially troubled European markets (Southern European markets). 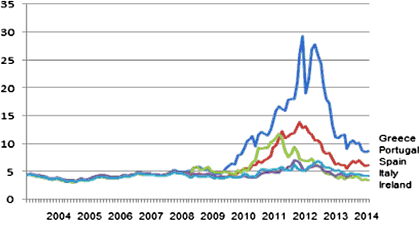 [1] Consider, for instance, the European Commission President Jose Manuel Barroso’s speaking notes for the European Council held on 16-17 December 2010: “The current sovereign crisis has now become systemic in nature, and is driven not only by budgetary fundamentals, but also by the mispricing of credit risk by investors and short-term herding behaviour in the markets,” the notes say, Strupczewski (2010).

The preceding post comes to us from Dr. Emilios Galariotis, Professor and Director of the Institute of Finance at Audencia Business School, Styliani-Iris Krokida, PhD student at the Athens University of Economics & Business and Dr Spyros I. Spyrou, Professor in the Department of Accounting and Finance and Deputy Rector for Economic Planning and Development at the Athens University of Economics & Business. The post is based on their recent paper, which is entitled “Bond Market Investor Herding: Evidence from the European Financial Crisis”, forthcoming in the International Review of Financial Analysis and available here.