We recently published a paper on CEO compensation and value sharing between executives and shareholders. The paper is available here.

CEO compensation is a controversial subject that evokes considerable debate on whether public company CEOs are paid correctly relative to corporate performance. A recent survey by Heidrick & Struggles and the Rock Center for Corporate Governance highlights the extreme disconnect between public perception of CEO pay and the perception of directors responsible for designing pay packages at Fortune 500 companies. While 65 percent of directors believe that CEO pay is not a problem, a full 70 percent of the American public believe that it is.[1]

In terms of recourse, members of the public and corporate directors are also divided. Sixty-two percent of the public believe that CEO pay should be capped relative to that of the average worker, and 49 percent favor some type of government intervention to change current practices. Potential remedies favored by these respondents include substantial tax increases, strict limits on absolute and relative pay levels, a required increase in performance-based compensation, and elimination of stock options and equity-based awards. By contrast, corporate directors strongly oppose external intervention. Eighty-four percent believe that there should be no limit to CEO pay relative to that of the average worker, and almost all (98 percent) oppose government intervention in all forms (Figures 1 and 2). 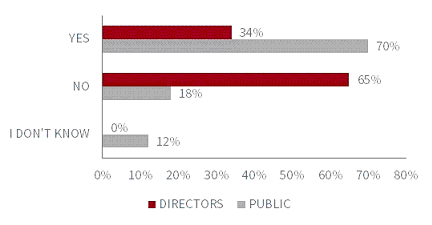 Figure 1: “In general, do you believe that CEO compensation at the largest U.S. companies is a problem?” 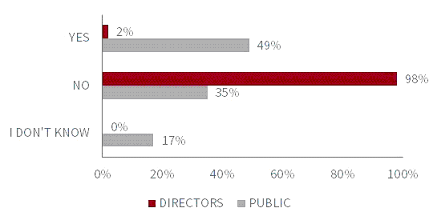 Figure 2: “Do you believe the government should do something to change current CEO pay practices?”

Pay for Performance and Value Sharing

CEO compensation packages represent an economic sharing arrangement between a company and an executive. In principle, the level and structure of compensation offered to an executive should reflect the pay necessary to attract, retain, and motivate him or her to create value for a company—taking into account the supply and demand of a competitive labor market and the pay opportunities available at alternative employers. A simple value sharing equation might be  as follows: 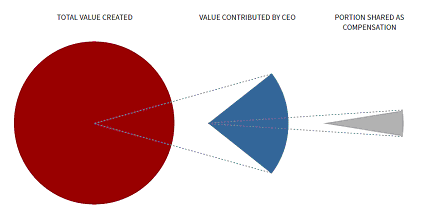 The difficulty that boards face in justifying CEO pay levels in some ways stems from the challenge of quantifying the answers to these three important questions.

First, there is no clear cut method for measuring value creation. To the extent that stock prices accurately and efficiently reflect changes in corporate value, total shareholder return might be the most accurate measure of value creation in a given period; however, to the extent that the prices of individual securities are influenced by exogenous broad market trends or behavioral sentiment, total shareholder return might be inadequate. Similarly, profitability metrics (such as operating income, free cash flow, or earnings per share) are influenced by possibly uncontrollable macroeconomic and cyclicality factors.  Moreover, it is not completely clear how to convert these operating metrics into shareholder value (i.e., they must be capitalized at appropriate interest rates to arrive at an estimate of value creation).

Survey data demonstrates the disagreement that board members and chief executive officers have over the most appropriate method of measuring value creation. While directors are more likely to believe that total shareholder return is the best measure of company performance, CEOs are more likely to believe that profitability measures (operating income and free cash flow) are best. This is perhaps not too surprising since CEOs are more likely to have a direct influence on operating performance than stock prices. Still, no single measure receives consensus support, and most companies do not measure corporate performance with a single metric (Figure 4).[2] 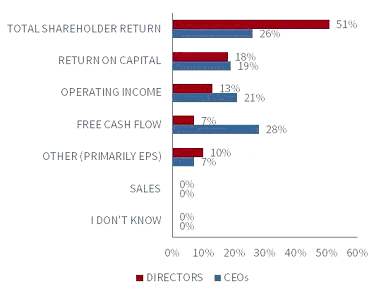 Figure 4: “In your opinion, if you were to select only one metric, which of the following is the best measure of company performance?”

It is also extremely difficult to quantify the contribution that an executive team much less an individual executive makes to overall organizational performance. Researchers have tried to estimate the value a CEO contributes with highly mixed results. For example, Thomas (1988) finds that CEOs are responsible for only 3.9 percent of the variance in performance among companies, while Mackey (2005) finds that the impact is as high as 29.2 percent.[3]

These considerations are further complicated by important differences among types of companies.  At companies in industries with long product development or life cycles—such as pharmaceuticals and technology licensing—CEOs are unlikely to affect substantially current year or near-term revenues.  At the same time, the quality of the research and investment choices of those CEOs may not be known for a decade or longer. In other industries the CEO can have a profound immediate effect.

Directors have a more favorable view than even the highest estimate resulting from the Mackey (2005) research. According to survey data, directors believe that 40 percent of a company’s overall performance is directly attributable to the efforts of the CEO.

Finally, no formal standard exists for sharing value between a CEO and shareholders. Interviews with compensation consultants suggest that shareholders are satisfied if the CEO receives 1 percent of total shareholder return over a three-year period.  For example, if $4 billion in value is generated through an increase in market capitalization and dividends paid, shareholders are satisfied with a CEO earning $40 million. Survey data suggests that directors consider a similar value sharing arrangement to be fair. Given a hypothetical situation in which a company’s value increases by $100 million over the course of a year, the typical director believes it is fair to pay the CEO $2 million (2 percent) in compensation. Still, these are not rigid standards for structuring pay packages. Explicit value sharing equations are not typically agreed to in advance, and most companies do not disclose this calculation retrospectively.

So long as shareholders, directors, CEOs, and members of the general public do not agree on the key qualitative and quantitative assumptions regarding how CEO compensation should be set, the topic of CEO compensation is likely to remain controversial.

[1] Heidrick & Struggles and the Rock Center for Corporate Governance at Stanford University, “CEOs and Directors on Pay: 2016 Perception Survey on CEO Compensation,” (2016).