Covenants are an important feature of loan contracts that enable ongoing monitoring of borrowers by banks and flexible renegotiation of contract terms in the face of changing external and borrower conditions.  A large body of empirical research has examined the consequences of loan covenant violations for public firms.  However, little is known about how banks react to covenant violations by private companies, despite the large share of these firms in the economy. Any reduction in access to loans is likely to have a more direct impact on investment and employment for private firms since they are primarily reliant on banks for financing. In a new paper based on supervisory data on syndicated loans, we compare the impact of violations across public and private firms and show that access to bank loans becomes less assured and more collateral-dependent for private firms, especially as firm risk increases and economic conditions deteriorate.

We use supervisory data obtained from examiner reviews of syndicated loans, undertaken annually under the Shared National Credit program, to examine how contingent access to funding is for both types of firms. Our 2006-2012 data covers the recent recession and contains information on the covenant compliance and collateral information for higher-risk syndicated loans, typically borrowers who are below investment grade. Firms range in size from $100 million in assets to over $3 billion in assets, with about 30% of observations corresponding to public firms. Though the median public firm is larger than the median private firm, we find that the data contains a good mix of public and private firms both above and below $1 billion in assets.  The data contains about 13,000 loan year-observations and firms are not compliant with covenant terms in about 23% of the loan-year observations in our sample.  We have information about several loan characteristics, firm size, leverage, internal loan ratings as well as firm-level probability of default estimates enabling us to identify separately the effect of the public-private status of a firm on bank decisions after violations.

We show that banks offer waivers or amend covenant terms after violations to 85% of the public firm violators, but only around 60% of private firm violators receive waivers/amendments. There remains a fairly large difference in the likelihood of obtaining a waiver/amendment among public and private firms even when we control for other differences between them such as in default risk, firm size, and others. 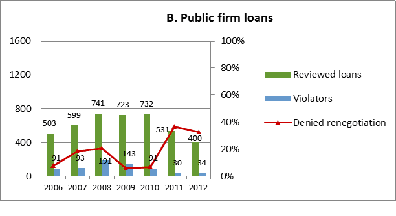 We find that there are substantial reductions in credit access for middle-market firms smaller than $1 billion in assets, when they do not obtain waiver/amendment. Covenant violations result in more limit cuts and balance reductions for private firms relative to comparable public firms. For instance, the average reduction in the loan limit to assets ratio for a private firm violator is about 900 bps in 2008 as opposed to 600 bps for a public firm violator. The difference in outcomes persists when we control for differences between these firms. We find that bank relationships do not make a significant difference to outcomes.

While private firms face more credit constraints than public firms throughout our sample period as seen below, the magnitude of credit cuts is more severe during the 2007-2009 recession, when more firms violate covenants, bank lending standards become tighter and collateral values reduce.  Though public firms also face increased credit cuts during the initial part of this recession, they fare much better once the credit conditions ease in 2009. Note that very few public firms violate covenants in 2011, and thus there is some statistical noise in the outcome measure for this year. 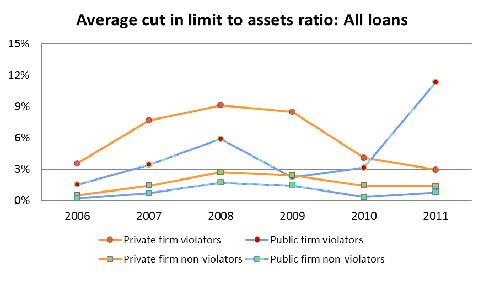 We hypothesize that the refinancing flexibility available to public firms and banks’ loss mitigation incentives account for the differences we observe.  While public firms can obtain equity financing from the stock market, are more likely to have access to long-term funding from the bond market, and can rely on wider set of creditors for loans on account of greater transparency, private firms have fewer funding alternatives especially as firm risk increases or external conditions deteriorate.  Under these conditions, the likelihood of credit losses is higher for private firms than for otherwise similar public firms, making lending banks more cautious about continuing to lend to these firms, unless they can provide sufficient collateral.

Furthermore, since collateral can serve to align incentives of borrowers with banks and also protect banks against losses in the event of default, we examine whether over-collateralized loans fare better than loans that are unsecured or partially secured, for public and private firms.  We find that the extent of limit cuts or balance reduction faced by private firms is smaller, when they can provide more collateral.  For example, when loans are partially secured (with loan to value  above 70%), private firms face on average a reduction of 1,200 bps in their loan limit to assets ratio, whereas the reduction is only about 400 bps for over-collateralized loans to private firms.   The impact of collateral on continued credit access is much smaller for public firm violators.  Further, collateral does not make much difference to outcomes for non-violators. Thus, collateral acts as another mechanism through which private firms can become more credit constrained than public firms.

By conducting the first investigation of the impact of covenant violations on credit access for private firms, we contribute to the existing literature in two ways.  Our results illustrate that access to the public markets can influence bank intermediation during renegotiation and that refinancing flexibility and collateral can act as substitutes in enabling firms to retain access to loans after violations.  Secondly, we show that the credit channel and the collateral channel can interact together in magnifying credit constraints faced by private firms during recessions.