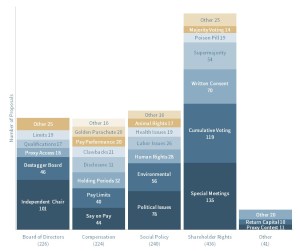 Individual activism is a controversial topic. Critics contend that the large number of proposals filed each year wastes corporate resources and shareholder attention. They point to the fact that the vast majority of proposals fail to receive majority support. For example, the 1,123 individual shareholder resolutions voted on during the 10-year period 2006-2015 received only 29 percent support, on average (see Figure 2). 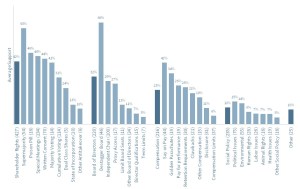 Of these, only a handful of subject matters garners meaningful support, including the elimination of supermajority requirements, the elimination of staggered boards, and the removal of bylaw provisions that limit shareholder influence. By contrast, voting support for most board, compensation, and social policy matters remains exceptionally low; over half of all categories of issues brought before individual shareholders never received majority support in any corporate meeting during the entire 10-year measurement period (see Figure 3). 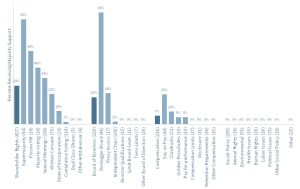 Defenders of individual activism contend that every shareholder is a legitimate participant in the corporate governance system. Although individual shareholders might not have the size of investment of a blockholder or institutional investor, their shares still have voting and economic rights, and shareholder resolutions are a means of exercising those rights. To this end, individual activism can be seen as an expression of “shareholder democracy” and the very capital market pressure necessary to maintain discipline on corporate managers and directors and to ensure efficient outcomes.

To better understand the role of individual shareholder activism in corporate governance, we interviewed nine individual activists, whose activity levels range from occasional filings to dozens of resolution per year.[3] The individuals we interviewed come from a variety of professional backgrounds, with careers as engineers, scientists, stock brokers, consultants, lawyers, and writers. Two were community activists prior to becoming shareholder activists.

Most individual activists are fairly narrow in their focus. Seven of the nine individuals we interviewed file proposals exclusively related to one topic area. These include: environmental matters (2), international human rights (2), diversity-related matters, socially conservative causes, and limiting restricted stock grants. The other two individuals focus on governance-related issues across a broad range of topics: staggered boards, board diversity, independent chairman, proxy access, term limits, retention requirements, the elimination of anti-takeover protections, and others.

They were motivated to become involved in governance matters either because of issues they witnessed directly in their careers or because of social matters that strongly resonate with them. For example, one noticed that donations made by a large consumer products corporation to a controversial nonprofit group generated criticism from customers: “Contributions that were supposed to create goodwill were creating negative will or ill will and I thought that this could be a breach of their fiduciary duty.” Others were concerned about environmental risks, lack of gender diversity on boards, or human rights violations in foreign countries and decided to file resolutions to change corporate practices.

Generally, the activists we spoke with target companies in which they already own shares. Only one identifies companies and expressly purchases shares to file a resolution (purchasing the minimum, $2,000 to $3,000 per company). Some file on their own behalf and others on behalf of others who share common concerns but do not own shares. Several have affiliations with nonprofit groups who separately advocate for similar issues.

None of the individual investors that we spoke with collaborate with large institutions. Some find support from pension or socially responsible funds that share their viewpoints. None reported receiving support from mainstream institutions such as Fidelity, Vanguard, BlackRock, and State Street.

Corporations tend to react negatively to individual shareholder resolutions. According to one activist, “Companies have a nervous breakdown when you send them one of these, especially depending on what you include in your supporting statement, because they have to print these statements.” Companies generally spend considerable effort trying to keep resolutions off the proxy: “They sometimes file upwards of 60 pages on why my proposal shouldn’t be there, why the proposal shouldn’t go forward, etc.”

Because they lack the resources of institutional investors, individual shareholders are mindful to keep costs down. Several noted that the filing process itself is virtually cost-free. However, the cost of attending annual meetings, especially ones that are not local, is a factor limiting the number of resolutions they file. Most of the individuals that we spoke with file between two and 20 resolutions per year, generally with local companies; one files upwards of 60 per year.

Despite their active participation in the proxy process, they tend to have little interaction with management and none with the board of directors, outside of the annual meeting. The meeting itself is generally described as “a rubber stamp exercise:” “My general impression is that the shareholder meetings are not for the shareholder to talk. They are for the company to do their business and move on.” Generally, management and other shareholders are not receptive to their presence: “Most people there see proponents as a nuisance, regardless of the issues.”

Individual activists see their activity as part of a broader process of bringing about change. They are also not fazed by low voting support. It is more important to them to raise the issue, and clear the thresholds necessary to be able to reintroduce the resolution in future years. According to one, “You can’t get lost in the whole idea that the vote percentage is key…. We’ve had some of our biggest wins with a 3 percent vote, a 5 percent vote.”

Still, shareholder activists take great pride in the victories resulting directly or indirectly from their resolutions. For example, one activist convinced Abbott Laboratories through the resolution process to offer a non-GMO version of infant formula Similac in the United States. Another convinced an oil company to add more female directors to the board following the vote on a resolution to adopt board quotas. One compelled the CEO of Coke to forfeit a large restricted stock grant. Another convinced Citigroup to adopt proxy access.

Despite their role as underdogs, individual activists take the long-term view that their participation in the governance process leads to positive change: “Sometimes it takes five, seven, 10 years. You have to be very tenacious to bring about change.” According to another, “It’s the democratic system to improve corporate governance. The ability to criticize the board, to help companies and their shareholders: It is amazing, the democratic system.”

[2] Data from FactSet Research. Calculations and categorizations by the authors.

[3] These individual were Andy Behar, Eric Cohen (and colleagues Susan Morgan and Bill Rosenfeld), Alan Farago, James McRitchie, Eve Sprunt, Elton Shepard, Tom Strobhar, Jing Zhao, and one person who wished to remain anonymous. Interviews were conducted in June and July 2016. All quotes are derived from these interviews and edited slightly for clarity.

This post comes to us from David Larcker, James Irvin Miller Professor of Accounting and Senior Faculty at the Rock Center for Corporate Governance at Stanford University, and Brian Tayan, a researcher in the center.  It is based on their recent article,”Gadflies at the Gate: Why Do Individual Investors Sponsor Shareholder Resolutions?,” available here.