A well-functioning independent board of directors is a pillar of effective corporate governance.  However, establishing and maintaining a truly functioning board remains a challenge for many companies. In response to apparent breakdowns in corporate oversight, policymakers have taken steps to encourage strong and independent boards. Most notably, following a series of high-profile corporate scandals involving the likes of Enron and WorldCom, Congress passed the 2002 Sarbanes-Oxley Act (SOX).  SOX, coupled with the subsequent shift in the major stock exchanges’ listing requirements, put in place a number of initiatives to encourage the active monitoring of independent directors.

A large body of academic literature has also highlighted the importance of board independence and has explored its effects on various measures of firm performance.[1] Despite the strong push for greater director independence, the observed links between board independence and firm performance are often quite weak. Moreover, corporate fraud and misconduct still remain a significant problem in Corporate America (KPMG Forensic Integrity Survey, 2005-2006, 2009, and 2013) even after a decade of significant regulatory efforts that were designed to promote a board’s oversight function through director independence.[2]

Given this background, we have recently conducted an empirical study, available here, that takes a different approach to gauge a board’s true functioning independence Most studies have primarily focused on the directors who are classified as independent in the major director databases (ISS and BoardEx), and they often ignore directors who are not clearly insiders or outsiders, but are instead classified as “gray.” Gray directors are non-executive directors who have a linked affiliation with the company in some form or another, and thus cannot be easily classified as either independent or executive directors. These gray directors include former employees as well as some outsiders who have a financial connection to the firm beyond the payment they receive as board members. Despite their prevalence (51 percent of the S&P 500 firms from 2000 to 2012 had gray directors), their influence on the board monitoring function has not received much attention in the literature.[3]

In many cases, gray directors are indirectly classified as “non-independent,” regardless of their fundamental characteristics. However, we suspect that there are important “shades of gray,” in which different types of gray directors may influence board dynamics in very different ways.  Depending on the circumstances, we can envision scenarios where gray directors are aligned with executive directors and other scenarios where they may be very actively aligned with outside independent directors. In typical cases where executive transitions go smoothly, we expect that former-employee gray directors are more likely to be aligned with current executives on the board.  In stark contrast, other gray directors, including bankers and consultants who are outsiders, may not necessarily align with inside directors, particularly in circumstances where these outside gray directors have strong incentives to maintain their personal reputations in director labor markets. Notably, these outside gray directors may be quite informed about specific aspects of the firm due to their skills and experience and, therefore, may be acting more like informed outside directors who can provide effective checks and balances over the management team. 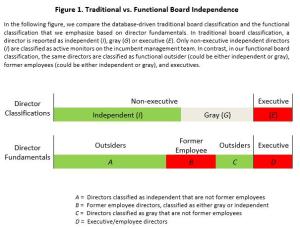 Our analysis concentrates on S&P 500 firms over the time period 2000-2012 and focuses explicitly on the various connections between board structure and the incidence of corporate fraud.[4]  We view corporate fraud as the manifestation of poorly functioning governance and use the Stanford Securities Class Action Clearinghouse website to collect incidences of corporate fraud among S&P 500 firms against which a securities class action lawsuit has been filed under the provisions of the federal securities acts.

Consistent with much of the literature that fails to find a strong link between board independence and firm performance, we first find that board composition as traditionally measured by the fraction of independent directors on the board has little effect on the incidence of corporate fraud. However, consistent with our hypotheses, we show that our new measure of “functioning” independence is negatively correlated with corporate fraud. This negative relationship is both economically and statistically significant and also robust to various alternative specifications. We find that a 1 percent increase in the percentage of functioning independence level is associated with 0.2 percent decrease in the likelihood of fraud. This finding suggests that a newly elected former-employee director serving on a board of 10 directors (replacing another non-executive director while holding other board compositions the same) would account for a 2 percent increase in the fraud likelihood, which is quite notable given that the average fraud likelihood in our sample is just 10 percent.

We find that these effects are particularly pronounced in the cases where a firm’s board uses its discretion to aggressively classify their former employees as independent directors. We also find that gray directors who are outside consultants significantly reduce corporate fraud intensity, whereas gray former-employee directors significantly increase the fraud likelihood. The gray consultant directors’ effects are particularly strong when these directors have significant external connections. Altogether, these findings lend support to both the shades of gray and reporting conservatism effects.

Overall, our study highlights the importance of employee career concerns and the key role of former employees in discussing the functioning level of board independence. We apply these important within-firm labor dynamics to promote a further understanding of what determines misconduct in Corporate America.

[2] The 2013 KPMG Integrity Survey reports that 73% of the 3,500 surveyed employees witnessed misconduct over the prior year.  These numbers are very similar to those in the earlier 2005 and 2009 surveys.

[4] While an extensive literature has explored the links between director independence and firm performance, very few studies have focused specifically on the relationship between fraud and director independence. Notable exceptions include Beasley (1996) and the 2010 report provided for the Treadway Commissions by Beasley et al.

This post comes to us from Professor Joel Houston, Assistant Professor Jongsub Lee and Ph.D. candidate Hongyu Shan of the University of Florida. It is based on their paper, “In Search of Board Independence: Former Employees, Shades of Gray and Director Classifications Revisited,” available here.