On October 25, 2016, the Argentine province of Santa Fe issued $250 million in international bonds. One aspect of this offering is highly unusual for international sovereign debt: the bonds are not listed on any of the major global stock exchanges.

Such offerings are almost always listed, and usually on the Luxembourg Stock Exchange. Why did Santa Fe decide to stray from the herd? Perhaps it realized that there was little value to be gained from listing on an exchange.

In our recent paper, “The Sovereign-Debt Listing Puzzle,” we investigate what purpose is served by listing sovereign bonds on an international exchange. We conclude that there is little, if any, value to this practice. To quote one senior capital markets lawyer to whom we spoke:

I am inclined to conclude . . . that in practice sovereigns list for the same reasons that some people carry a rabbit’s foot around with them for luck – it may not do any good, but other people do it, and there is no harm in it, so why not.

There are two standard stories told in the legal and financial literature as to why issuers list on exchanges. First, exchanges are seen to act as a bonding mechanism for securities issuers.  By strictly enforcing tough standards, a stock exchange enables issuers to signal their quality to investors and commit to “good” behavior.  Second, stock exchanges have historically enhanced liquidity in their listed securities by bringing together buyers and sellers in a physical or electronic marketplace.

In the largest financial market in the world—the market for sovereign debt—the practice of listing on a stock exchange remains nearly ubiquitous today. All but a handful of the highest-rated sovereign nations (such as the United States) list their international bonds—that is, bonds expected to be traded by foreign investors—on one of the major global stock exchanges. Sovereign-bond prospectuses typically highlight the specific stock exchange selected by the issuer on the cover page, suggesting this is material information.

Neither the “bonding hypothesis” nor the “liquidity hypothesis” for stock–exchange listings has been tested in the modern era in the market for sovereign debt, however. In fact, little is known about where sovereigns list their bonds and why they do so. Using a hand-constructed database of international sovereign bond issuances from 1945 to 2015, we sought to test these listing hypotheses.

As the figure below shows, we find that the market’s preferred listing jurisdiction has shifted in waves. While New York listed the largest share of bonds from 1945 through the early 1980s (followed by Switzerland and Germany), Luxembourg has been the overwhelming favorite among sovereign issuers for the past 30 years. Most recently, Dublin has emerged as the fastest-growing listing jurisdiction. 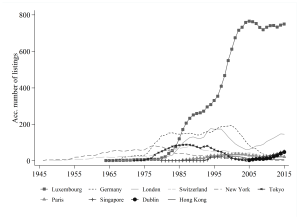 To test the bonding hypothesis, we examine empirically the price impact of a sovereign’s choice of exchange on which to list its international bonds. A rational sovereign will list its bonds on the exchange that minimizes its cost of capital. Thus, we test whether there are differences in bond yields at issuance across the different exchanges, controlling for various issuer and bond-level characteristics. If the bonding hypothesis holds, then we might expect some degree of sorting of sovereign issuers across the exchanges by quality and credibility, thus giving rise to differences in yield. In fact, we find little such evidence: None of the major jurisdictions is consistently associated with a significant yield differential.

To supplement these empirical results (which we found puzzling), we both examined the top exchanges’ listing requirements and talked to a large number of the leading lawyers for sovereign debt issuances. We found that, contrary to the bonding hypothesis, the top listing jurisdictions for sovereign bonds seem to compete primarily on the ease and speed with which they grant listing approvals. The current top jurisdictions such as Luxembourg, London, Dublin, and Singapore are characterized by the near absence of substantive listing standards and enforcement for sovereigns. In practice, the only hurdle to obtaining a sovereign-bond listing on any of these exchanges is the payment of a modest fee. Thus, the lack of observable yield differentials between the various exchanges is likely best explained by the fact that none of them actually performs a screening or monitoring function.

Nor does the liquidity hypothesis—as it is commonly stated—explain sovereigns’ listing patterns, given that few international sovereign bonds are ever traded on an exchange. The pricing and trading of sovereign bonds occurs almost entirely over the counter.

Yet if listing does not increase a sovereign’s credibility with investors, why do sovereigns choose to list at all? We hypothesize that sovereign listings are primarily a form of regulatory arbitrage, driven by a hodgepodge of investment restrictions and tax provisions across the globe that cause certain investors to favor listed securities, regardless of the exchange’s jurisdiction. Such restrictions—or the mere belief in their existence—prompt sovereigns to list on the fastest, cheapest, and most permissive exchange that qualifies, which in turn induces a race to the bottom among the exchanges.

The policy implications are significant: If our explanation is correct, the practice of listing sovereign bonds abroad is merely a costly response to investment restrictions that, in the absence of any bonding effect from listings, no longer serve an obvious purpose. While the major securities exchanges may have historically played a crucial private ordering role in the sovereign-debt market—there is some historical evidence of this in the literature—sovereign-bond listings today may well amount to waste. Given the relatively low cost of obtaining an exchange listing, rational sovereigns have little incentive to test the waters by issuing unlisted bonds.  Nor do investors long accustomed to exchange-listed bonds necessarily have the appetite to weigh the merits of unlisted bonds.

Interestingly, a recent change in EU law may provide the necessary push to dislodge the market from its inefficient equilibrium. The new Market Abuse Regulation (MAR) that took effect in July 2016 imposes significant new disclosure obligations on all securities listed on exchanges in the EU, which would include all of the top three listing jurisdictions for sovereign-debt (Luxembourg, London, and Dublin). Unless exemptions are introduced for sovereign issuers, we predict that this will either trigger a widespread shift to another listing jurisdiction such as Singapore or, perhaps, embolden issuers to abandon the exchanges altogether.

This post comes to us from professors Elisabeth de Fontenay and G. Mitu Gulati at Duke University Law School and Josefin Meyer, a Ph.D. candidate at Ludwig Maximilian University of Munich. It is based on their recent paper, “The Sovereign-Debt Listing Puzzle,” available here.