While a major overhaul of U.S. financial regulation may be unlikely during the early months of the Trump administration, changes should be expected as his nominees to lead the Treasury Department and financial regulatory agencies are confirmed. This will be the biggest turnover in regulatory leadership since the passage in 2010 of the Dodd-Frank Act, and it may also prove to be a test for Basel III, the macro-prudential policy framework created by the G20 countries in response to the 2007-2008 financial crisis.

Dodd-Frank, which has not been fully implemented, is the legislative vehicle for U.S. integration of Basel III recommendations.[1] The act aims to limit systemic risk, allow for the safe resolution of the largest intermediaries, increase scrutiny of risky nonbanks, and reform derivatives trading. The Financial Choice Act, introduced in the U.S. House of Representatives last year as an alternative to Dodd-Frank, proposes significant changes in financial regulation. Although it is unlikely that the Financial Choice Act will pass, it is considered by many to be the blueprint for the regulatory revisions to come.[2]

There may be uncertainty about what will be changed and when, but there is no doubt that there will be turnover among senior staff at regulatory agencies. In addition to President Trump’s appointments to lead the Treasury Department, the Securities and Exchange Commission (SEC), and the Commodities Futures Trading Commission (CFTC), his administration will also be able to nominate new heads of the banking authorities, namely the Office of the Comptroller of the Currency (OCC), the Federal Deposit Insurance Corp. (FDIC), and the Federal Reserve Board of Governors, all within the next 18 months. More specifically, three new commissioners, the maximum allowed from any one political party, will be nominated for both the SEC and the CFTC. The terms for current leadership of the OCC, the FDIC, and the Federal Reserve expire in April 2017, November 2017, and February 2018, respectively. The key position of vice chairman for supervision also is vacant at the Fed.[3] (The directors of the OCC and the Consumer Financial Protection Board [CFPB] serve on the FDIC’s board.[4])

The diagram below provides an overview of the U.S. financial regulatory structure. It shows that these changes will affect the entire financial sector, including banks, insurance companies, financial market utilities (FMUs), and securities markets. Furthermore, seven of the 10 voting members of the Financial Stability Oversight Council (FSOC), which coordinates U.S. macro-prudential policy, will be replaced. These new regulators will have substantial authority, both as individual agency chiefs and as members of the FSOC, to change the way Dodd-Frank is applied. They can do this without going through Congress or even adjusting their own formal rule-making processes. For example, agency chiefs can change enforcement priorities by “amending or rescinding and replacing related guidance, such as interpretations of rules, internal policies and manuals.”[5] Unlike the repeal of Dodd-Frank or a rule change, a new direction in guidance and interpretation can be ordered and implemented almost immediately. 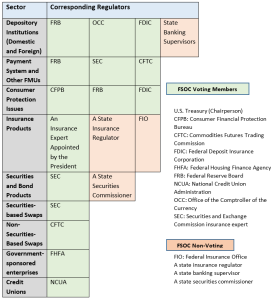 In light of the leadership overhaul at the regulatory agencies, the blueprint defined by the Financial Choice Act, and the softer tone regarding Dodd-Frank revamping, the Trump administration may first focus on changes that would provide regulatory relief to the financial sector without altering the formal rules. In that context, the following are potential targets for early change:

To sum up, more than six years after the advent of Dodd-Frank, many are calling for a reassessment to ease the burden it places on financial-services companies, especially banks. The softened rhetoric of the new administration is quite different from the aggressive calls for repeal that were common during the campaign and suggests a more subtle approach to regulatory change. This new tack also is more in line with the broader international debate. The pressure for regulatory change is not confined to the U.S. The latest delays in the finalization of Basel III’s banking rules show that the post-crisis regulatory framework itself is under scrutiny.[10]

[1] See http://www.milkeninstitute.org/publications/view/812 for more details on the Dodd-Frank Act.

[2] The regulatory easing concerns only part of the regulatory framework. No change in stance is expected regarding the anti-money laundering (AML) regulations.

[3] The term of the vice chairman of the Federal Reserve Board ends in June 2018.

[6] On a similar note, the Department of Labor’s (DOL) fiduciary duty rule will likely survive but may encounter significant delay in its implementation.

[7] A Banking Organization is defined to include 1) insured depository institutions 2) bank holding and savings and loan companies and 3) all companies that are treated as bank holding companies under the International Banking Act.

[10] The Group of Central Bank Governors and Heads of Supervision (GHOS), the oversight body of the Basel Committee on Banking Supervision, postponed a Jan. 8 meeting due to disagreement over new capital requirements for lenders.

This post comes to us from Claude Lopez, PhD, who leads the International Finance and Macroeconomics research team at the Milken Institute, and Elham Saeidinezhad, PhD, who is a research economist on the team.