In this essay — prepared for a Washington & Lee symposium on corporate law, governance, and purpose — I propound a simple thesis: Corporate governance is best seen not as a subset of economics or even law, but instead as a subset of moral psychology.

Recent research in the nascent field of moral psychology suggests that we humans are not rational beings, particularly when we act in social and political settings. Our decisions on right and wrong (moral judgments) arise instantly and instinctively in our subconscious, out of conscious view. We rationalize these decisions — whether to feel compassion toward someone who is harmed, to desire freedom in the face of coercion, or to honor those matters we consider sacred — after we have decided. We layer on this veneer of rationality to reassure ourselves of our own moral integrity and to signal our moral values to like-minded others in our group.

Over the past couple of decades, studies and experiments have revealed that our moral judgments and discourse arise from moral matrices that mix and match at least six fundamental moral values, each expressible as opposites along a separate axis:

See Jonathan Haidt, The Righteous Mind: Why Good People Are Divided by Politics and Religion (2012). According to this research, we make moral judgments by weighting these values—often in ways that are closely aligned with our identification with a political group. In this country, political liberals are generally moved by values of caring/compassion and fairness/equality, with adherents feeling strong (even visceral) reactions against narratives of harm and inequality. Meanwhile, political conservatives are moved by additional values of sanctity, authority/order, and loyalty, with adherents experiencing strong reactions against narratives involving desecration, disrespect, and disloyalty. And political libertarians are moved primarily by the liberty/freedom value, with strong reactions against government (or other) restrictions on individual freedom and free markets.

The following schematics from Haidt’s The Righteous Mind identify the different weights these moral values hold for American liberals, conservatives and libertarians: 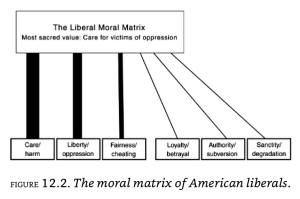 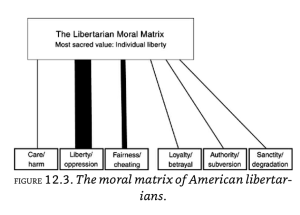 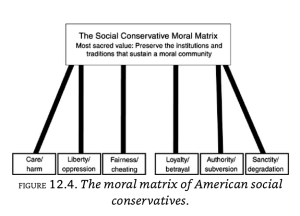 Further, as each group self-reinforces its own value matrix, the group’s views are purified and harden as they “bind” and then become “blind” to the other.

Using different narratives, moral psychologists have gauged the moral responses and attitudes held by adherents to each group. Thus, members of different groups react strongly and differently to moral narratives.  Notice how you react:

Thus, moral psychology addresses the age-old question of whether we are essentially rational or emotional beings.  The resounding answer: We are instinctual, emotive beings who come to moral views based on a moral matrix that we are often unaware of and that we often take from the moral group to which we are aligned. And only after coming to a moral conclusion do we then rationalize our view by resorting to the language sets provided by the group, drawing from its fundamental moral values.

Thus, moral psychology reveals that corporate governance may best be understood as the product not of rational economic incentives or prescriptive legal norms, but instead moral values. On questions of right and wrong in the corporation, there is every reason to see the decisions by shareholders and managers, like those of other human actors, as essentially emotive and instinctive. Further, the justifications offered for their choices — whether resting on shareholder primacy, team production, board primacy, or even corporate social responsibility — should be seen as after-the-fact rationalizations, not reasoned analysis. In short, when we operate in the “super-organism” that is the corporation, where specialized roles have led to almost unparalleled human cooperation, our decisions on right and wrong arise from powerful, instinctive, and often invisible moral matrices.

If true, corporate governance faces a host of new inquiries:  What are the moral matrices of corporate managers (generally and within specific corporations) and shareholders (among different intermediary classes and individually)?  Do corporations themselves have cohesive moral matrices or are they, instead, hodge-podges of the moral views of their decision-making constituents?  How do corporate moral perspectives arise, become reinforced, and ultimately harden? When and under what circumstances have corporate moral perspectives shifted and evolved?

But these are inquiries for another day.  For purposes of this essay, my question focuses on how corporate law academics approach moral decision-making in the corporation.  And it invites all of us to engage in some self-reflection on what sort of moral corporatist we are.

What kind of corporatist:  progressive, libertarian, or conservative?

In the spirit of the symposium honoring the work of David Millon and Lyman Johnson, two self-proclaimed “progressive corporate legal scholars, ”the essay undertakes to apply these insights to a stylized corporate morality tale:

How would David and Lyman respond to this corporate governance story, which pits the interests of a variety of corporate constituents, some highlighted in the story and others lurking in the shadows? That is, how do they balance the moral values of compassion, fairness, freedom, loyalty, order, and sanctity?  Of course, we do not really know what would be their instinctive, emotive response.  And the interesting thing is that they would not be able to predict it either, given that our moral judgments emanate from the bowels of our unplumbed subconscious.

I undertake my speculation—itself, of course, a moral judgment—by reviewing a handful of recent corporate governance pieces by David and by Lyman, thus to explore the motivated reasoning each of them has employed to explain their stances on the subject. As interested as I am in how David and Lyman might respond to the story that I posit, I also use this exercise to discern my own moral matrix and how I respond to the story. In fact, the value of the exercise may not really be about David or Lyman. Instead, it is a call to each of us to think of our own moral matrix—the offshoring tale as a corporate governance Rorsharch test.

In re-reading their writings, I am struck by the many differences (sometimes obvious and sometimes subtle) between David’s and Lyman’s moral approaches.

To me, David has the heart of a true progressive; his writings reveal great care and concern for fair (egalitarian) treatment of those affected by the modern corporation. At the same time, his moral matrix also seems to lead him to consider whether some of these paradigmatic progressive goals might not be accomplished through an enlightened corporate freedom in which managers respond to market and reputational pressures “to pay attention to human rights and environmental norms of good behavior.” But he has doubts that market-driven freedom—given informational limitations, the tendencies of corporate management to cheat, and the corporation’s profit-driven motivations—will be sufficient to move corporations to “go as far as CSR advocates might they think should.” That is, he questions the loyalty that corporate managers feel toward the financial bottom line, rejects their obedience to a narrowly-defined imperative of corporate profits, and especially disdains the sense that the profit motive and our capitalism are sacred. Thus, in the name of caring and fairness, David disavows fundamental libertarian/conservative tenets. He may well define the corporate progressive.

Lyman, on the other hand, comes across to me as more multi-dimensional. Although he has joined David on joint projects seeking to temper the oppressive power of corporate managers, Lyman seems to have a clearer vision of the corporation as a moral institution. He attaches importance to (enforceable) loyalty, built on deep, unstated assumptions of trust by those who give their lives and souls (and perhaps money) to the corporate enterprise. He imagines fiduciary duties, it seems, as a sort of credo for our life in modern business. He grounds many of his arguments in historical analysis and constitutional frameworks, thus revealing the importance he attaches to legal ordering and tradition. He also is much clearer in seeing sanctity in the human ties that bind us together in the corporate “super-organism,” just as bees assiduously and even selflessly work in various ways to make their hive succeed. That is, while David may sense the sacred in our natural environment, Lyman seems to sense it in the corporation, a hive of human collaboration. In the end, Lyman may well be a model corporate conservative.

This post comes to us from Professor Alan R. Palmiter at Wake Forest University School of Law. It is based on his recent essay, “Corporate Governance as Moral Psychology,” available here.