Contrary to conventional wisdom, merger votes are rarely close. An analysis of voting outcomes in domestic mergers with a contestable Russell 3000 target shows that: (i) very few transactions – roughly 1 percent – were voted down from 2006 to 2015 (sample size of 907); (ii) activist investors almost never campaign against pending mergers; (iii) most mergers were approved with high or very high margins from 2010 to 2015 (sample size of 392) (see the table below); and (iv) approval percentages in mergers are not correlated with the size of premiums offered to shareholders. 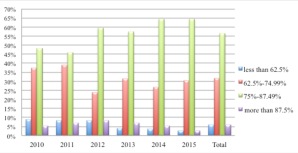 Shareholder votes can thus seem like a lengthy rubber-stamping exercise. In fact, voting on mergers normally takes at least two to three months and can take up to more than five or six months. The delay is costly, especially when measured in lost opportunities. It can distract management from the ordinary course of business, delay integration of the merged companies, lead to inefficient allocation of resources, and invite litigation. The delay can also jeopardize the deal by allowing more time for buyer remorse and increasing the value of the so-called seller’s put, which is the target’s ability to pursue alternative offers and still put itself to the buyer at the deal price.

In light of these findings, I wonder whether the value of shareholder voting could be exaggerated in mergers. A provocative way to view voting is that shareholders in the 99 percent of approved deals subsidize the benefits for shareholders in the 1 percent of rejected deals. That view is misguided, however, because the voting requirement protects all shareholders against bad deals. Without the credible threat of shareholder rejection, directors might propose more deals that shareholders would reasonably want to reject but couldn’t. Voting helps ensure that directors present only those deals that they believe will get approved. I call this the “deal filtering effect” of voting. Voting also has a “premium effect:” It pressures directors to bargain harder with the acquirer. Given that a large premium over a target’s valuation is the best way to prevent rejection of a bid, a credible threat of rejection leads to a higher premium and a better price for shareholders.

Still, the current system is far from perfect. The opportunity costs of delay from shareholder voting can jeopardize a company’s operations and completion of a deal. In my article, I question whether a full-blown vote is always necessary.

I explore the idea that a faster approval process can preserve the deterrent value of shareholder rejection in the overwhelming majority of deals where approval is almost assured. I assess three possible ways to speed up the approval process, one of which a company could choose in its charter documents. The first is to hold a vote only if a certain percentage of shareholders requests it after reviewing the terms of a deal. I call this “vote-on-demand.” The second is to require shareholder approval for only a fraction of signed mergers selected at random by an independent authority like the secretary of state in the state of a company’s incorporation or a court of competent jurisdiction in that state. Corporate executives would not know in advance whether their deal would be selected and so would still have an incentive to act as loyal agents of company shareholders. A third proposal is to shorten the review process at the Securities and Exchange Commission and elsewhere and to move more quickly to a vote and closing.

These proposals could prompt several criticisms. One is that shareholder voting reduces the risk of litigation in light of the Corwin line of cases, which apply the business judgment rule to transactions approved by an informed, uncoerced, and disinterested vote of shareholders. I counter that the proposals also mitigate that risk, and in any event dealmakers are free to balance the benefits of transaction speed against the threat of litigation.  Other criticisms are that shortening the time between signing and closing would limit rival bids and auctions (although merger rules are not designed to preserve such alternatives), weaken shareholder protections (although the proposals do not reduce most shareholder protections or affect corporate governance generally), and ultimately be unnecessary, given that dealmakers can already speed the process through medium-form mergers (although the point that long-form mergers should be improved still stands). I conclude that none of these criticisms is insurmountable, further strengthening the case for streamlining the merger process.

This post comes to us from Professor Matteo Gatti at Rutgers Law School. It is based on his article, “Reconsidering the Merger Process: Approval Patterns, Timeline, and Shareholders’ Role,” forthcoming in the Hastings Law Journal and available here.