The following is an abbreviated version of Professor Coffee’s May 23 testimony before the House Financial Services Committee’s Subcommittee on Capital Markets, Securities, and Investments.  The deleted portions of his testimony relate to the specific content of proposed bills to extend and supplement the JOBS Act.

I thank you for inviting me.  I have been asked to comment on 11 proposed bills, all of which seem to have a common source: a 2018 Report entitled, “Expanding the On-Ramp: Recommendations to Help More Companies Go and Stay Public,” prepared by several industry organizations.[1] In overview, I think they range from promising possibilities (but poorly expressed and without necessary conditions) to sadly ideological attempts to dismantle core provisions of our contemporary disclosure system. The common premise of these bills and the “Expanding the On-Ramp” report is that high regulatory costs and burdensome SEC rules discourage many private companies that would otherwise go public from doing so. That was also the premise of the JOBS Act, enacted in 2012. This premise is a myth, but it is persistently asserted by industry groups seeking to enact a wish list of deregulatory reforms.

In that light, and because time is limited, let me make some very basic points:

1. IPO volume declined radically in 2001 and has never returned to the pre-2000 level. The “Hot Issue” Bubble crashed in that year, destroying investor confidence, and that should remind us that underregulation can be as serious a problem as overregulation.

2. The JOBS Act did nothing to turn this problem around, and indeed IPO volume in 2015 and 2016 was lower than in many years before the JOBS Act. Although there has been an uptick this year in the case of high-tech offerings, other offerings (and particularly smaller ones) remain in a deep freeze.

3. If high regulatory costs and SEC overregulation were a cause of low and decreasing IPO volume, this would be a uniquely American problem. But it is not. IPO volume has declined even more dramatically in Canada and has declined on a level comparable to the U.S. in Europe and Japan. Because Canada has no national securities regulator, the decline of IPOs in Canada cannot be blamed on an overregulating national regulator.

4. What then does explain the decline in IPOs? Two basic causes of declining IPO volume stand out:

A.  Private companies find it easier, quicker, and often cheaper to raise capital in robust private equity markets (where litigation risk is also much lower and less executive time is diverted); and

B.  IPOs for smaller firms have been consistently unsuccessful for a sustained period, losing money for all concerned (both investors and underwriters). Finance professor Jay Ritter, the leading scholar on IPOs, has recently released data showing that a high majority of small offerings have had negative earnings per share for years after the offering and poor first day returns. Thus, analysts and underwriters tend to shun such offerings. Academic research suggests that the relative disappearance and unprofitability of smaller firm IPOs is because such firms cannot gain the economies of scale and scope that are increasingly necessary to compete in a globalizing marketplace.[2].

5. What is the core fallacy of the JOBS Act and its approach? The JOBS Act seeks to reduce regulatory and legal costs. But as a percentage of the total costs of an IPO, these costs are trivial. The single greatest component in IPO costs is the underwriter’s discount, and, depending on the size of the offering, it represents between 71 and 79 percent of the average total costs of an IPO. Although IPO costs are probably not the primary problem, the futility of a cost-reduction strategy becomes obvious once we recognize that these bills focus only on relatively minor costs.

6. Is there a crisis? NO! Private companies are tapping ready sources of capital in venture capital and private equity markets. High-tech firms (such as Dropbox this year) are doing successful IPOs (but they appear to be mainly motivated more by a desire to provide liquidity to their employees and other holders of their stock options). Other firms (such as Spotify) have pursued “direct listings” (probably again to obtain liquidity for employees and stock option holders because they have raised all the cash they need in private markets). Many issuers have spurned the format of the classic IPO.

7. What will happen to the smaller firm that cannot access the IPO market? Venture capital firms have long known that prices and premiums are higher in the M&A market than in the IPO market. Simply put, the smaller firm can be sold at a higher price/earnings multiple in the M&A market (where the buyer is acquiring control and will therefore pay a control premium). Such a buyer can transform the acquired business and move it to a global scale.

8. In this light, relaxing disclosure and transparency rules and downsizing important corporate governance protections (such as “say on pay” or the Rule 14a-8 shareholder proposal rule) represent a dubious policy for Congress to follow. That is, it is no favor to the retail investor to allow smaller companies to escape full disclosure or to avoid corporate governance norms, when these are precisely the offerings most likely to fail.

9. One last general point: A number of these bills amend or modify specific, existing SEC rules (such as Rules 139, 163, or the rules under the Investment Adviser Act). This amounts to micro-managing the SEC. That might be justified if one does not trust the SEC or considers it hopelessly committed to overregulation. But this is a Republican SEC, and I have not heard anyone describe Chairman Clayton as opposed to de-regulation. In that light, it would make far more sense for Congress to ask the SEC to study a proposed rule change and report back within a defined period. After all, the SEC can respond in a more nuanced way and has greater expertise and experience. The SEC can also adjust its rules in a more flexible fashion, while Congress adopts permanent rules, carved in stone.

II. The Empirical Evidence on IPOs: Volume and Returns

The basic pattern is shown by Exhibit One, which shows that not only have the average number of IPOs declined (from 310 a year in 1980-2000 to 108 from 2001-2016), but the first day returns (and thus the returns that attract investors and underwriters) have declined dramatically: 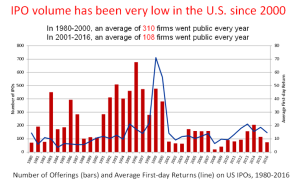 This pattern has been even more pronounced for smaller firms (defined as firms with annual sales below $60 million): 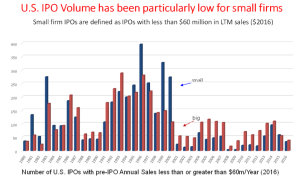 This decline in IPO volume is not unique to the United States. The decline in Canada has been even more extreme (where the absence of a national securities regulator undercuts the argument that overregulation is the cause): 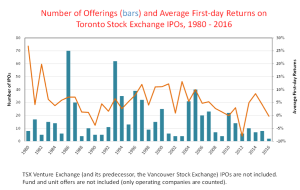 The Canadian experience is particularly instructive, because the first day average returns on IPOs have been negative since 2008 (with the lone exception of 2010). This same decline in IPO volume and returns has also characterized Europe and Japan. Across all the developed securities markets, only China has recently experienced an exuberant and growing IPO market.

Small firm IPOs fare especially poorly in terms of earnings per share (“EPS”) following their IPO. Ritter, Gao, and Zhu measure the percentage of both “large” and “small” IPOs that experience negative EPS in any fiscal year. They find that the percentage of “small” IPOs (from the prior three years) with negative EPS in any given year has ranged between 65 percent and 90 percent since 1999. In contrast, “large” IPOs (from the same prior three years) have generally had positive EPS over the fiscal years since 2002: 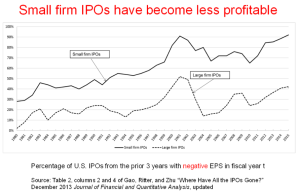 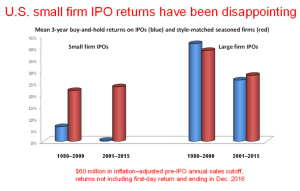 III. The Costs of an IPO: Direct and Indirect

A key assumption to both the JOBS Act and the proposed legislation before this subcommittee is that deregulation can significantly (or even moderately) reduce the costs of an IPO. But this is highly doubtful. The following chart, taken from a PriceWaterhouseCoopers study, shows that across all sizes of IPOs (small to large), the underwriting discount accounts for between 71 percent  and 79 percent of the total average costs: 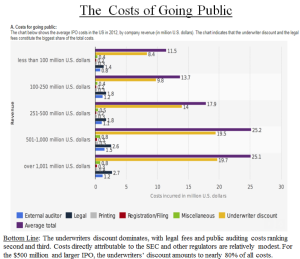 Nothing else comes close to the underwriter’s discount, with legal and audit costs coming second and third. Legal fees range between 10 percent to 13 percent of the total costs. The actual SEC registration and filing costs are trivial and in the 1 to 2 percent range). Although these proposals might reduce legal and auditing costs somewhat, the reduction would be modest to an already minor cost.

In reality, the “real” costs of an IPO are hidden, and include the costs of diverted executive time, the costs of a now multinational “roadshow,” and the potential litigation costs. Some privately-held companies simply do not believe that they can spare time for an IPO when they are locked in intense competition with often larger rivals. Others fear a stock price drop might spur litigation. Still others doubt that their IPO price would be as high as their valuation in their last round of private financing (and some recent IPOs have fallen below that level). But these reasons have little to do with the direct financial costs of an IPO.

This is not to say that many private companies would not like to avoid some of the burdens that these bills would spare them from (if they were to go public). Yes, they would like to avoid “say on pay” votes and shareholder proposals by activists (which are made under SEC Rule 14a-8). Similarly, they might prefer a world in which proxy advisers (such as ISS and Glass-Lewis) were closely regulated into relative silence (as is also proposed in “Expanding the On-Ramp”). But such proposals all reduce shareholder rights and involve very problematic trade-offs. Nor will all “emerging growth companies” necessarily be attracted by such deregulation. Suppose, for example, that three new IPOs are caused by eliminating “say on pay” votes for EGCs, but 100 EGCs are thereby deregulated. The costs and benefits of such a move seem open to serious debate.

This package of bills starts from a flawed premise and proceeds to unfortunate conclusion by proposing major retreats in disclosure and corporate governance in order to encourage some additional IPOs. The evidence to date does not show any significant response to the concessions made in the JOBS Act in 2012. Moreover, these proposals would turn a transitional bridge into a semi-permanent two-tier disclosure system.

Not all these proposals are necessarily wrong-headed; some could be promising ideas if more sensibly implemented. But none have been vetted adequately by the SEC or other concerned constituencies. Some — most notably, the modifications to the shareholder proposal rule (Rule 14a-8), the say-on-pay rules, and the generally hostile attitude toward proxy advisory firms — represent major retreats in corporate governance. Other proposals — most notably, the substitution of a press release for a Form 10-Q as the means for reporting quarterly earnings — cripple interim reporting (ironically, just as Europe has moved to quarterly reporting).

The costs of these reforms seem real, while the benefits may be illusory. There is no crisis demanding major deregulation. Although smaller IPOs will likely continue to decline, the much larger “unicorns” are simply biding their time. Eventually, they will go public when they sense the time is ripe, but small cost incentives will not motivate them.

If these bills pass, one prediction is safe: In five more years, we will see JOBS Act III, based on the same dubious assumptions.

[1] These organizations include: (1) The Center for Capital Markets Competitiveness, (2) The American Securities Association, (3) The Biotechnology Innovation Organization, (4) The Equity Dealers of America, (5) Technet; (6) Nasdaq, (7) SIFMA, and (8) The National Venture Capital Association.

John C. Coffee, Jr., is the Adolf A. Berle Professor of Law at Columbia University Law School and Director of its Center on Corporate Governance.