Despite the central role of government regulation in academic inquiry and policy evaluation, there is no universally accepted way to measure how changes in regulatory complexity and intensity affect private industry at different times.  This lack of a standard methodological approach to measuring regulatory burdens on companies has limited the extent to which researchers can generalize and compare results of studies that consider particular regulations, industries, or time periods.  There is a strong need for a standard approach that is theoretically and empirically grounded and difficult to manipulate.

In Measuring Regulation, Miao Ben Zhang and I develop a novel approach based on the assumption that the burdensomeness of regulations is reflected in the response of regulated firms to those regulations.  (See here for PowerPoint).  When industries are more intensely regulated, firms within those industries spend relatively more on employees whose jobs entail navigating, complying with, and shaping regulations—principally legal and compliance employees.  We scale such expenditures relative to total employment costs.  (It is also possible to scale expenditures by industry revenue). To examine the robustness of our measure, we also consider headcounts as a share of total employment rather than the share of total expenditures, and we also consider a measure based on a broader definition of legal-related jobs

Our approach recognizes that the burdensomeness or complexity of regulation is not defined by the number of words used to describe it, or the budgets of federal regulators with the authority to enforce it, but rather is based on industry assessment and reactions such as expenditures to manage regulatory burdens. This approach overcomes many limitations and critiques of previous approaches, such as counting words of regulation or measuring regulators’ resources.

Longer regulations may actually be less burdensome, because they contain more nuance, exceptions, and detailed explanations and definitions of provisions that would otherwise be ambiguous and therefore costly.  Growth in the length of regulations may become less burdensome as industries consolidate or learn to cooperate through trade associations or shared law, accounting, and consulting firms.  Regulatory burdens may decrease as publishers or law firms prepare memos and other secondary sources and as the fixed costs of regulatory compliance can be amortized across more economic activity.  A regulation that is not enforced (or perceived as not enforced by regulated firms) may present little burden, if any.

More highly funded regulators are not always more aggressive.  A great deal of regulation is done through state law and agencies, self-regulatory organizations, and private rights of action and plaintiffs’ firms.  These sources of regulation—and changes in the intensity of their activities—are not reflected in federal regulators’ budgets or headcounts.

Previous approaches to measuring regulatory burdens based on counting words or measuring resources of federal regulatory agencies can make it difficult to identify the effect of regulations on specific industries.  Regulations can affect multiple industries in different ways.

The new regulatory index we propose (or minor variations thereof) can inexpensively and consistently measure changes in regulatory burdens for dozens of sectors over the last 30 to 70 years.  It could therefore become a powerful tool for empirical studies of legal changes.

Using this measure, we find evidence that in the years after the enactment of the Dodd–Frank Act, regulatory burdens increased substantially more in financial services than in the overall economy.

Figure 1: Time-Series of Various Definition of Regulatory Index for Financial Industry and Other Industries, 2004-2016 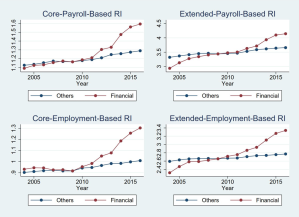 A difference-in-differences regression confirms that both the general upward trend in regulatory burdens and the jump for financial services after Dodd-Frank are statistically significant.

This does not appear to be driven by self-imposed conservatism in the wake of economic contraction, but rather by changes in regulation.  For instance, the index increased substantially more in financial services than in the real estate sector, which also contracted during the mortgage crisis of 2007-2009, but was not regulated like finance. 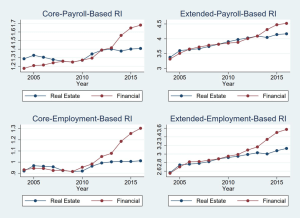 Moreover, a specific subsector of financial services, credit intermediation, which was targeted most heavily by Dodd-Frank, and which had the tightest nexus with the mortgage crisis, saw the largest increase in regulatory burdens. 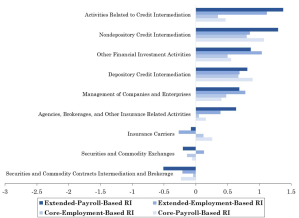 Our data come primarily from the U.S. Bureau of Labor Statistics, Occupational Employment Statistics, which is a large nationally representative survey of firms.  Reasonably similar data reported by households is available from several census surveys, such as the American Community Survey and the Decennial Census, and the Current Population Survey.

In future work, we hope to explore the use of census data.  Data from the Decennial Census could potentially be used to measure changes in regulatory burdens by industry at 10-year intervals going back as far as 1850.

This article contributes to the empirical legal studies and law and economics literature by creating the first generally applicable index of changes in regulatory intensity, complexity, or compliance costs that is objectively mapped to specific industries and sectors, that captures changes in regulatory burdens regardless of source (federal, state, or private; statute, regulation, case law; litigation or enforcement action), and that is based on the responses of industry participants to regulation rather than on a subjective assessment of the nature or importance of a particular regulation.  This index captures recent increases in financial regulation following the financial crisis of 2007-2009, specifically the enactment of Dodd-Frank in 2010.  The index is available on an annual basis going back decades and can become an important tool for empirical researchers to study the causes, effects, and timing of regulation of industry.

This post comes to us from Professor Michael Simkovic at the USC Gould School of Law. It is based on a recent article he wrote with Professor Miao Ben Zhang at the University of Southern California’s Marshall School of Business, “Measuring Regulation,” available here.