Equity markets are an important source of capital financing for firms, particularly in the United States. These large, liquid markets channel capital from savers to firms and facilitate corporate investment by distributing risks among many smaller investors. There is concern, however, that along with these benefits, equity financing has significant costs. One of the most prominent criticisms of the public ownership of firms is that investor pressure over short-term stock market performance causes public firms to forgo profitable, long-term investments.

This criticism has prompted such notable corporate leaders as Jamie Dimon of J.P. Morgan Chase and Warren Buffett of Berkshire Hathaway to lead efforts to develop a set of corporate governance principles designed to promote long-term focus and investment. Policymakers on both sides of the Atlantic have also tried to curb short-termism.  For example, in France grants long-term investors additional voting rights, and the European Commission is considering following suit. In the United States, the Delaware Supreme Court has endorsed the idea that a firm’s true owners have held shares long term.

Figure 1: Difference between Public and Private Firms Long Term and R&D Investment as a Fraction of Total Investment 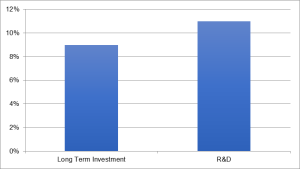 Figure 2: R&D Share of Total Investment, by Years Since IPO 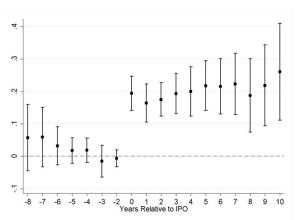 Because the majority of R&D spending goes to the wages and salaries of research employees, the results here suggest that public ownership particularly facilitates long-term and highly uncertain uncollateralized investments. It may be that public status does not cause firms to undertake more research; instead, when a firm is poised to expand its R&D program, it could opt to go public in order to access more cost-effective financing for these projects. The strong association between public status and R&D investment repeatedly evidenced by our estimates is consistent with either interpretation, but is inconsistent with the notion that earnings pressure renders public firms so short-sighted that they, on net, forgo long-term investment.

Figure 3: R&D Share of Total Investment, by Years Since Delisting 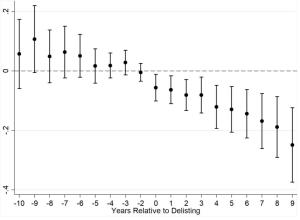 The knowledge spillovers associated with any given firm’s research spending makes boosting R&D a national concern and as such a host of federal and state policies aim to increase private R&D. The results here suggest that measures by policymakers or industry leaders that make it more difficult for firms to access capital through public markets would counter policies to support innovation and may reduce the R&D spending of U.S. firms.

This post comes to us from Laura Kawano, a research affiliate at the University of Michigan at Ann Arbor; Professor Elena Patel at the University of Utah; and Professor Nirupama Rao at the University of Michigan. It is based on their recent paper, “The Long and the Short of It: Do Public and Private Firms Invest Differently?,” which was co-authored by Naomi Feldman of the Federal Reserve Board; Michael Stevens at the U.S. Department of the Treasury, Office of Tax Analysis; and Jesse Edgerton of JPMorgan, and is available here. The views expressed in the post are those of the authors and do not necessarily reflect the views or policy of J.P. Morgan, the Federal Reserve Board of Governors, or the U.S. Department of Treasury. All access to administrative tax records has been through Treasury staff.