Appearances can be very deceiving. Case in point: The high-level summary numbers of voting results over the last 19 years seem to indicate that little has changed regarding proxy voting behavior among investors owning U.S. companies. A simple analysis of median vote support levels for management and shareholder proposals seems to reveal stasis – support levels remain at approximately the same levels they were back in the early to middle 2000s. 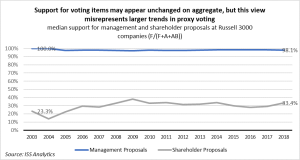 But the reality is that investor voting behavior among owners of U.S. companies has changed significantly – perhaps almost revolutionarily – over the past two decades. Corporate governance has risen in prominence as a result of, among other factors, increased regulatory and quasi-regulatory attention, a procession of major corporate scandals, and an increased proactive focus by engaged investors. This rise of investor stewardship and engagement have amplified proxy voting as an important part of the dialogue between companies and their shareholders; for the overwhelming majority of share capital represented in the U.S., voting is certainly no longer a compliance exercise. Proxy voting policies are becoming more complex, as investors continue to add to the list of factors they consider in their review and analysis of governance practices, including board independence, board accountability, diversity, myriads of executive compensation factors, shareholder rights, and environmental and social factors.

As a result of these pressures, the data indicates a number of changes in proponent filings and proxy voting behavior on shareholder proposals:

The last decade saw a dramatic change in investors’ attitudes towards environmental and social issues. A confluence of factors has led to the increase in the median level of support for environmental and social shareholder proposals as a percentage of votes cast from the middle single digits from 2000 until 2008 to the 24 percent in 2018, including pressures from the public and regulators in the aftermath of the financial crisis, global policy initiatives, major disaster events, and the evolution of the debate by proponents from a values-based framework to a value-oriented discussion of managing potential business risks. Increasingly, investors embraced sustainability and became more actively engaged on the issues. At the same time, key policy priorities, such as climate change and diversity have given a further boost to shareholder campaigns.

External Pressures in the Aftermath of the Financial Crisis

Support rates of environmental and social proposals began rising significantly in the aftermath of the financial crisis of 2008, which put pressure on institutions to pay closer attention not only to governance, but also to sustainable business practices more broadly, including environmental and social factors. In addition, several principles-based initiatives and regulatory mandates focusing on investor stewardship gained significant traction, including the UN Principles for Responsible Investment (PRI), which became the leading global framework for incorporating environmental, social, and governance factors in the investment process. At the same time, major industrial disasters, such as the 2010 Deepwater Horizon oil spill and the 2011 Fukushima nuclear disaster, underscored the relevance of ESG business practices. 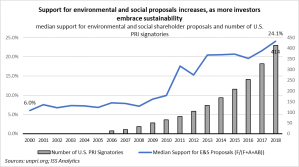 As these global trends towards sustainable investment were taking place, shareholder proponents of environmental and social proposals adjusted their approach to appeal to companies and investors. While the majority of proposals in the early 2000s sought companies to adopt or amend social or environmental policies, or to take a specific action with respect to a business activity, the tone began to change in the middle of the decade, with an increasing number of proposals seeking disclosure, risk assessment, and oversight of particular issues. The move away from requesting specific actions or the adoption of policies to seeking transparency and risk oversight changed investors’ attitudes towards proposals in two major ways. First, the proposals focused on the reporting, assessment, and monitoring of risks, thus appearing less dogmatic about business practices, and allowing for dialogue and engagement in a relatively cost-effective way. Second, the focus on disclosure and risk oversight changed the conversation from a values-based argument to an economic discussion about how environmental and social risks can impact the company’s long-term value. Companies and investors appeared more willing to engage in a debate that considered the long-term economic value of the company, which also allowed proponents to affirm their position themselves as long-term investors and to dispel previous perceptions of them as solely social or environmental advocates. 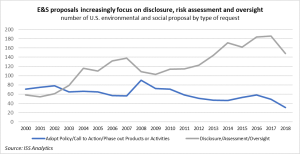 Investors Leave the Sidelines on Environmental and Social Issues

While a growing number of investors became more accepting of allowing for better disclosure on environmental and social issues, shifts in voting behavior took several years to materialize, and voting strategies continue to evolve. A significant portion of votes on environmental and social issues were cast as ABSTAIN until very recently, as some investors refrained from taking a position on issues that appeared to have no quantifiable economic impact on investments. With the rise of ESG investing – and as more institutions were held accountable to their adherence to the UN PRI – abstaining to vote on environmental and social issues was no longer a defendable strategy. The level of ABSTAIN votes began to drop after its peak in 2010 at 16 percent of votes cast, but only fell to below 10 percent of votes cast in the past two years, reaching its record-low level of 3 percent of votes cast in 2018. This level of abstains is beginning to approach the traditional level of ABSTAIN votes for governance proposals, which has averaged 1 percent since 2000, and reached an all-time low of 0.3 percent in 2018. 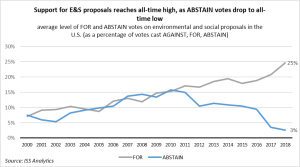 This significant decline in the level of ABSTAIN votes means that investors are now taking a position, and are more actively engaging with companies and proponents as they decide on whether to support specific initiatives. In fact, the discontinuation of ABSTAIN votes did not automatically translate to an increased number of FOR votes, as median support levels for environmental and social proposals remained flat from 2013 to 2016. However, recent developments have given an additional boost to environmental and social shareholder proposals.

The Paris Agreement and Other Tailwinds for Environmental and Social Proposals

In the middle part of this decade, support for environmental and social issues appeared to have plateaued, as shareholder proponents began pushing beyond disclosure and monitoring towards goals-setting and results-oriented risk management. This was particularly the case regarding carbon emissions and climate change-related proposals, where investors may have hesitated to weigh in on more aggressive targets that may appear to cross the line of interfering with the company’s business activities. The December 2015 Paris Agreement within the United Nations Framework Convention on Climate Change altered this dynamic, as it made climate change risk management a top policy priority for governments, regulators, and financial institutions. Climate change mitigation now required concrete results in the form of carbon emission reductions and alignment with the goal of keeping global temperatures from exceeding 1.5 or 2 degrees Celsius compared to pre-industrial levels. By 2017, climate change proposals peaked in volume, with a large number receiving significant support, while high-profile proposals at Exxon Mobil and Occidental Petroleum received majority support.

In addition to climate change, several other issues gained prominence in recent years and became top stewardship priorities for investors, which affected vote support levels of relevant shareholder proposals. Diversity in the boardroom and in the workplace received significant attention, as several investors adopted proactive policies that required a minimum number of women on boards. Shareholder proposals related to board diversity or reporting on employment diversity saw their support levels rise. In 2018, high-profile social issues with significant implications for public health and safety, such as the opioid epidemic and gun violence, also appeared on annual meeting agendas, receiving majority support in several instances. 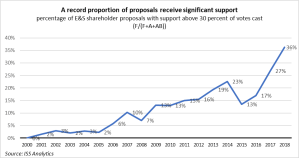 As companies recognize the changing investor attitudes on environmental and social proposals, more of them appear more willing to engage with proponents and reach an agreement about disclosures or policy adoptions, resulting in a high number of proposals withdrawn by proponents. In 2018, 48 percent of filed environmental and social proposals were withdrawn, while only 37 percent of filed proposals went to a vote. These figures were historically reversed, as typically a greater proportion of filed proposal went to a vote compared to those proposals that were withdrawn. The 2018 record number in withdrawal rates along with the record number of support levels for proposals that made it to the ballot indicate an inflection point for environmental and social issues, as these considerations move to the mainstream of investment management. 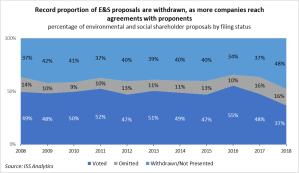 The Path Forward for Environmental and Social Proposals

Unlike the issues of some of the most successful corporate governance shareholder proposal campaigns since the beginning of the millennium (requests to declassify the board, adopt proxy access, adopt majority vote standard for director elections, eliminate supermajority vote standard), proposals related to environmental and social issues do not deal with binary policy questions. For example, proposals seeking to declassify the board targeted companies with classified boards, and investors who supported the declassification of boards generally had a simple voting decision to make.

Instead, a case-by-case evaluation of company practices, existing levels of disclosure, and company performance is almost certainly required when assessing environmental and social proposals. For example, companies that receive requests to report on sustainability typically provide some level of disclosure on sustainability issues. However, the voting decision will hinge on the quality of reporting. As such, one should not expect environmental and social proposals to average above-majority support levels given the nature of the requests. That said, environmental and social issues have surely entered the mainstream, and we can expect a high percentage of proposals achieving significant support levels for the years to come, as investors encourage more companies to improve disclosures and practices on these issues. Disclosure on ESG issues is only beginning to gain prominence among U.S. companies; therefore, given the right targeting, there is ample room for these types of proposals to gain additional support. 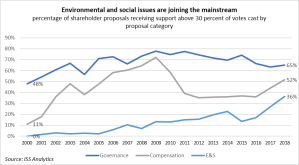 This post comes to us from Institutional Shareholder Services.