In the past 30 years, defaults on corporate bonds have been substantially higher than the historical average. Dividing the years from 1970 to 2016 into two equal periods, the default rate of U.S. corporate bonds rose from 0.12 percent to 0.46 percent, almost quadrupling. The figure below illustrates this development. In a recent working paper with Victoria Ivashina of Harvard, we investigate the role of corporate disruption in this trend. 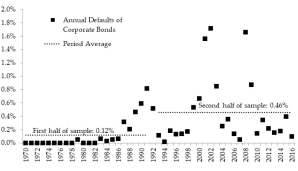 To study financial losses associated with disruption, we examine the U.S. corporate bond market. Obviously, other stakeholders – such as shareholders, employees, and suppliers – also suffer if a firm stumbles or fails. Creditors constitute a good laboratory for three reasons. First, because creditors are senior, problems have to be fairly major to show up there.. Second, corporate bonds are liquid securities with excellent data available about them. We can carefully track every rated bond very. Third, losses on corporate bonds are important because bonds are widely held. Corporate bonds are prominent in pension portfolios as well as in mutual funds held in retail accounts. Unlike the gains from disruption, which go to successful entrepreneurs and Venture Capital investors, losses to creditors of traditional companies are likely to be widely felt.

Our study focuses on industry-level variation in the intensity of disruption. We identify industries with more venture capital investment and a higher number of initial public offerings (IPOs) as subject to more disruption. These patterns have changed significantly. There are many examples of industries that have experienced strong disruption at some point in the last 40 years. Alcoholic beverages saw relatively high rates of new listings starting in the 1970s (e.g., Robert Mondavi Winery in 1993; Redhook Brewery in 1995). After the 1990s, this faded. Entertainment industries, including movie studios and casinos, saw relatively high entry in the 1980s and 90s (e.g. New Line Cinema in 1986, Columbia Pictures in 1987, Polygram in 1989, Loews Cineplex in 1998, and Caesar’s Entertainment in 1999), but the rate of entry has slowed since. The same is true of communications (e.g., Charter Communications, 1999). Fossil fuel-related industries saw few IPOs and little venture capital investment prior to the most recent decade, when many shale gas-related companies and other firms listed (e.g., EP Energy, 2014). The rapid entry of new firms into business services has been almost continuous. As an alternative to IPOs, we measure industry-level venture capital investment. VC captures firms early or very early in their lives, while IPO firms have some record of success. VC investment is a measure of the creation of new firms, while the number of IPOs is a measure of the success of existing firms. In our tests, the two measures produce similar results.

Our key finding is that high entry is associated with higher future default rates of corporate bonds. We document examples when incumbents’ financial performance deteriorates after new competitors appear. A high percentage of IPOs in an industry predicts more defaults. We subject the basic finding to a number of tests to rule out alternative mechanisms. For example, we find that exposure to globalization is less important than the appearance of U.S. competition. We also examine the role of technology, which is a key underlying cause of increasing disruption. In particular, we use patenting activity by firms and individuals to scrutinize how technology changes the competitive landscape. We find that corporate patenting on average reduces defaults (think of how incumbents’ patents serve to protect their competitive position), while individual patent filings are more often associated with disruption.

The corporate bond market seems to be aware of the risks posed by disruption to incumbents: Bonds issued in an industry with more recent IPO activity command higher yields. This is especially true of high-yield bonds. We observe  higher bond yields for issuers in high-disruption industries after controlling for maturity, credit rating, call features, and covenants. In other words, the bond market seems to price higher future defaults into bonds issued by firms more subject to disruption.

Our results are consistent with a large role in credit markets for technology-enabled disruption. There are two key implications. First, business models are less stable than they used to be, technological advantages more contestable, and market leadership positions less enduring. This makes corporate cash flows less stable, and corporate credit riskier. We estimate that around 80 percent of the long-run increase in defaults can be ascribed to increased disruption. Second, technological development and the disruption it generates may be good for society overall, or at least for some groups. However, not everyone gains: Some firms get displaced, and their creditors are hurt. An implication is that the distributional effects of technological change are as relevant in financial markets as they are in labor markets.

This post comes to us from Professor Bo Becker at the Stockholm School of Economics. It is based on a recent paper by him and Professor Victoria Ivashina at Harvard Business School, “Disruption and Credit Markets,” available here.