In the U.S., shareholder proposal filings have historically played an important role in advancing corporate governance and in highlighting key risks related to environmental and social issues. Some of the major shifts in governance practices during the past two decades – including the annual elections of directors, the adoption of majority vote standard for director elections, and the adoption of proxy access among large firms – were largely prompted by shareholder resolution campaigns. Shareholder proposals have also served as a driving force for greater corporate awareness of environmental and social risks, such as climate change risk management, diversity and inclusion in the workplace, and sustainability reporting.

As most companies have not filed their proxy statements, most proposals currently available to ISS Analytics either received no-action letters by the SEC or were made available directly by proponents. As of February 28, 2019, ISS Analytics has identified 395 shareholder proposal filings at U.S. companies, down from 450 filings identified at the same time in 2018. While it is early for any conclusive remarks on trends, 2019 promises to be a busy year with respect to voting and engagement around shareholder proposals, with social and environmental issues taking the center stage along traditional governance topics.

In 2017, environmental and social resolution filings surpassed the number of governance proposal filings for the first time. The trend continued in 2018, and we have no reason to expect a reversal in 2019.

Climate change, environmental impact, political contributions, human rights, and human capital management are some of the key environmental and social themes featuring during this upcoming season. While our current data indicate that governance proposals make up only one-quarter of total filings, we expect their numbers to grow to about half of all filings by the end of the year, since many of these proposals typically become known closer to the time of the company’s proxy disclosure. Proposals requiring an independent chair, the reduction of supermajority vote standard, and requests to allow for the right to call a special meeting or to act by written consent will likely feature as they most prevalent governance voting items this year. 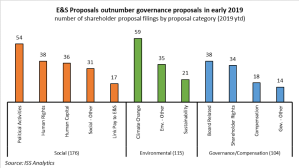 Taking a closer look at the top 10 proposal types by number of filings in 2019, we see many of the same proposals that were part of this list in the previous year, including requests to report on political contributions and lobbying, requests to disclose targets on carbon emissions, and proposals seeking reporting on sustainability and climate change risks. As more data become available in the coming weeks, we expect these numbers and even the order of the proposals to change, as some of the governance topics will likely climb towards the top of the list. However, it becomes clear that social and environmental campaigns tend to address a broader variety of topics, while governance proposals tend to concentrate on a select number of key issues.

In 2019, we expect several relatively new topics to make their appearance, and their long-term success will depend on their support levels or acceptance rates by companies this year.

The increasing costs of medication in the U.S. have raised concerns amongst consumers, politicians, and some shareholder proponents over many years, and the issue has been the focus of public debate and political discourse. In previous years, shareholder proposals seeking reporting and oversight on drug price increases either received low support levels (with median support of approximately 5 percent of votes cast) or received no-action letters by the SEC and were omitted from ballots. Shareholder proponents took a new approach in 2018, whereby five proposals asked companies to report on how they integrate risks related to public concerns about drug pricing in their executive compensation programs. The five 2018 proposals received a healthy median support level of 23 percent of votes cast, and proponents have filed at least nine such proposals so far in 2019.

Greater awareness of ocean pollution by microplastics and the impact on marine wildlife has prompted a new campaign by shareholder advocacy group As You Sow. The group’s proposals, filed at four of the largest oil and chemicals companies, seek for greater disclosure on plastic pellet spills and cleanup actions during the resin production process. As You Sow has also filed several resolutions seeking reporting on recycling and recyclable packaging at food and beverage companies, a campaign that has been ongoing for many years.

In December 2018, the Interfaith Center on Corporate Responsibility announced a campaign targeting companies in the “private prison, technology, banking, and defense sectors deemed at risk for human rights violations as a result of government contracts” related to immigration policies and practices by the U.S. administration. This new type of proposal is the most recent example of current events and prominent social issues potentially becoming the subject of a shareholder vote at general meetings.

In 2018, two campaigns dealing with the high-profile social issues of gun violence and the opioid epidemic received above-majority support levels, and we expect engagement efforts on these two topics to continue. 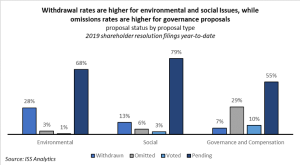 A sector-based analysis can help identify the types of issues that are most relevant for each sector. For example, social issues appear to dominate the health care sector, while environmental concerns are the key theme for the energy sector. The consumer discretionary sector receives an almost equal amount of social and environmental proposals. The results are not surprising, as they correlate with each sectors types of activities and relevant social or environmental impact. 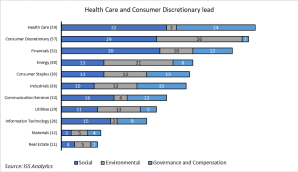 In terms of frequency of shareholder proposals by sector, the new expanded “communication services” sector has the highest percentage of companies in the S&P 500 that have received shareholder resolutions. The communication services sector includes telecommunications companies, such as Verizon Communications Inc. and Comcast Corp., some technology firms, such as Alphabet Inc. and Facebook Inc., as well media companies, such as The Walt Disney Co. and CBS Corp. The pervasiveness of shareholder proposals in this sector makes intuitive sense given the size of many of these firms as well as the increased focus on their governance practices and their social impact. 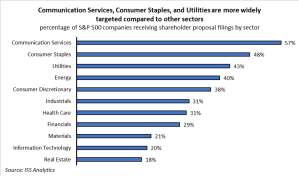 As more proxy statement disclosures become available, ISS will continue to monitor and report on trends in U.S. shareholder proposal filings during the upcoming season.

This post comes to us from Institutional Shareholder Services. It is based on the firm’s memorandum, “An Early Look at 2019 US Shareholder Proposals,” dated March 1, 2019.