Lawyers and investors pay close attention to how stock-based deals affect the acquirer’s short-term earnings per share (EPS). Merger announcements are regularly accompanied by discussions of whether the deal will be accretive or dilutive for the acquirer’s EPS, and if immediately dilutive, how quickly the deal would turn accretive.  Finance theory, however, does not imply any particular benefit of an EPS-accretive deal (in which the post-merger EPS is higher than the acquirer’s pre-merger EPS), focusing instead on whether the deal creates value. The over-emphasis on the EPS impact may suggest a myopic focus on short-term stock price and a neglect of the long-term deal synergies. Despite the importance of this issue, previous literature presents no evidence regarding whether and to what extent EPS impact is a factor in the M&A market. Our paper fills this gap by showing that deal-making is very sensitive to EPS impact, and short-term focus is one of the underlying reasons.

When the acquirer has a higher price-to-earnings (P/E) ratio than the target, this condition can be met, and there exists an exchange ratio that would satisfy both “requirements” that the deal offer a positive premium to the target and be accretive to the acquirer’s EPS. On the other hand, if the acquirer has a lower P/E ratio than the target, it is not possible to pay a positive premium and have  the deal to be accretive for the acquirer. Since paying a premium appears to be necessary for the deal to go through, the only way for the acquirer to avoid EPS dilution in this situation is to make an offer in cash, or a combination of cash and stock. 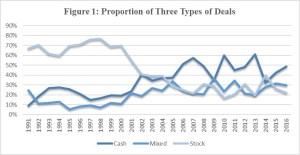 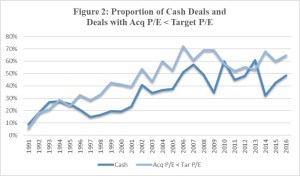 We next examine whether deal terms and thus sharing of deal synergy between acquirer and target shareholders are affected by concerns about EPS dilution. For deals with a range of feasible exchange ratios that allow for a premium and accretive EPS, a smooth distribution of bargaining power between acquirer and target would suggest that, for pure stock deals, the exchange ratio would also be smoothly distributed. In contract, what we find is that there is a clustering of deals just below the dilutive exchange ratio. This result suggests that the target is giving up part of the premium to enable the acquirer to avoid EPS dilution. However, what is surprising is that given the possibility of mixed deals, EPS dilution is still a constraint. This implies that there are costs (e.g. fixed costs of funding and distributing cash) that prevent small amounts of cash from being used to mitigate the minor EPS dilution.

Why Sensitive to EPS?

What drives the sensitivity of acquirer managers to EPS dilution in stock merger deals? Management estimates of deal synergies could be discounted by the market unless they are validated by analysts, which takes time after the announcement. Thus, at deal announcement, market participants may rationally focus on the immediate impact on EPS, causing the stock price to be sensitive to EPS effects. Institutional investors who are sensitive to short-term price” will, therefore, prefer deals that are accretive. We hypothesize and find that when the acquirer’s stock is largely held by institutional investors that trade frequently, a stock deal is more likely to be accretive, and more likely to be accretive by a small margin than be dilutive by a small margin. We also find that the market reaction to slightly dilutive deals is more negative than to slightly accretive deals, when the acquirer’s investors trade more frequently, on average. Moreover, we show that when the acquirer CEO’s compensation is linked to an EPS target, a deal is more likely to be done in cash and more likely to be accretive when stock payments are involved.

The short-term focus of corporate managers has attracted significant attention in recent research and debates about governance. Focus on EPS is considered one manifestation of short-termism. Our paper provides evidence that mergers – arguably among the most important investment events companies engage in – are affected by acquirer manager’s sensitivity to EPS dilution. We show that this not only affects how deals are paid for, but also the acquisition premium and the types of deals. We find that acquirer’s EPS sensitivity is related to the short-termism of its shareholders as well as the inclusion of EPS as a performance metric in the CEO’s compensation contract. Our results do not imply that EPS accretion drives merger decisions. Rather, we show that while efficiency would require that the net present value of the acquisition, as determined by the total synergies created and the split between the acquirer and target, should be the only considerations in determining which deals get done, the EPS impact of the deal is also an important factor. Our results suggest that management concern about EPS accretion distorts merger decisions.