Investment expenditure in Europe collapsed in the aftermath of the 2008 global financial crisis. This collapse followed a boom during which the corporate sector borrowed heavily (Gopinath, Kalemli-Ozcan, Karabarbounis, Villegas-Sanchez, 2017). Figures 1 and 2 illustrate the extent of the increase in leverage and the collapse of investment  in Europe as compared with the United States. These developments were particularly pronounced in peripheral European economies. 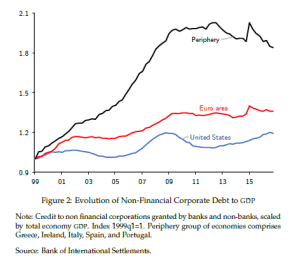 In a new paper (Kalemli-Özcan, Laeven, Moreno, 2018), we investigate whether the corporate debt accumulated during the boom years held back investment by non-financial corporations after the crisis. Specifically, we consider whether high levels of corporate debt translate into lower investment rates, a situation we refer to as “debt overhang.” We argue that the maturity structure of corporate debt is crucial to understanding the effect of debt on firm investment. If the debt accumulated during the boom years is mostly short-term, i.e., of maturity less than one year, there is an increase in the rollover risk associated with such debt as lenders are often unwilling to renew expiring credit lines during a crisis when collateral values drop.

It is equally important to separate the role of banks in reducing the credit supply from firms’ indebtedness in order to provide estimates on the effect of debt overhang on firm investment. We match our firms to their banks to consider how the debt overhang and rollover risk interact with weak credit supply from banks in a period of tightened lending conditions. During the European sovereign debt crisis, lending conditions deteriorated because of weak balance sheets of banks with high levels of exposure to risky sovereign debt. As a result, banks might cut lending to all firms regardless of firms’ financial positions, such as the level and maturity structure of their debt. To distinguish the impact of weak credit supply from financial frictions arising from leverage and maturity structure of the firm’s debt, our analysis considers the sovereign risk exposure of banks as a measure of bank weakness. 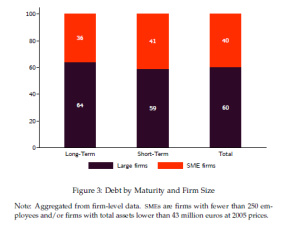 Our analysis is based on a comprehensive firm-level data set including small private firms from the ORBIS/AMADEUS database. Figure 3 shows the importance of covering firms of all sizes, as small firms account for about 41 percent of total short-term debt. To match firms to their banks, we use information on the firms’ main relationship bank and then match the bank’s name and address to its balance sheet using the information in BANKSCOPE. In order to separate banks’ exposure to their home countries’ risk from that of other nations, we use confidential ECB data, which has nationality information on sovereign exposure. The final matched dataset consists of over 2 million observations, covering firms and their banking relationships in eight European countries from 2000 to 2012.

We assess the differential impact on investment of different levels of leverage and debt maturity between the pre-crisis (2000-2007) and post-crisis (2008-2012) periods. We base the assessment on aggregate demand shocks using four-digit industry-country-year fixed effects. These effects will absorb the impact of changes in credit demand for the four-digit sector that our firms operate in as well as any changes in country-level demand conditions, including those arising from changes in sovereign risk and general uncertainty conditions. We also control for bank fixed effects to capture the role of pre-existing bank relationships. Figure 4 shows the evolution of net investment over time, broken down by firms with high versus low financial leverage. It is clear that investment declines more markedly during the crisis for firms with high financial leverage, while investment patterns pre-crisis display a parallel trend across both groups of firms. 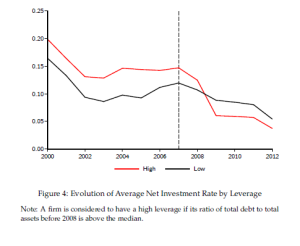 Our regression results show the important interaction between firms’ indebtedness and weak banks. Firms with higher leverage reduce investment more, and this effect strengthens when these firms are linked to weak banks. Firms that borrowed more short-term suffer from rollover risk and decrease investment more, and again this effect gets stronger when these firms are connected to weak banks. The effect of bank weakness is strongest for banks in peripheral countries with large exposures to sovereign risk through their holdings of their home countries’ sovereign debt. In quantitative terms, the debt overhang and rollover risk are both important factors. A simple calculation based on our firm-level estimates suggests that debt overhang and rollover risk explain about 60 percent of the actual decline in aggregate corporate investment during the crisis.

These results highlight that debt overhang and rollover risk of firms, compounded by the effect of impaired-bank lending, played a significant role in holding back corporate investment during the European debt crisis. This suggests that growth-enhancing policies that more directly target the financial conditions of firms are needed to reduce the debt overhang and stimulate the real economy. The results also point to the dangers of an overreliance on short-term debt to finance investment during good times.

This post comes to us from Professor Sebnem Kalemli-Ozcan at the University of Maryland; Luc Laeven, the director general of the European Central Bank; and David Moreno at the Central Bank of Chile. It is based on their recent paper, “Debt Overhang, Rollover Risk, and Corporate Investment: Evidence from the European Crisis,” available here.