The U.S. Securities and Exchange Commission (SEC) recently identified incidents in which top executives sold shares before disclosing to the public negative information about cyberattacks. For example, the former chief information officer of Equifax, Jun Ying, exercised his stock options and sold nearly $1 million in shares about a week before Equifax disclosed the hack of its database in September 2017, gaining $480,000. Equifax stock dropped over 30 percent after news of the data breach became public. Motivated by the SEC’s concerns, we examine the relation between insider trading and corporate disclosure policies around cyberattacks.

We predict that the likelihood of insider trading is higher for firms that withhold the information than for firms that voluntarily disclose it. To test this prediction, we identify companies that were attacked and distinguish between those attacked companies that disclosed information on the attack and those that withheld information on the attack, but parties outside the company later discovered the attack. For the subsample of cyberattacks that companies voluntarily disclosed between 2010 and 2015, we find no significant insider trading in the days before the disclosure. However, for cyberattacks about which information was withheld from investors, and parties outside the company later discovered them, we find insiders sold shares after the cyberattacks and before investors learned about these attacks. Moreover, we find top officers, who were more likely to be aware of the cyberattack and influence the decision regarding whether to disclose it, made the insider sales, whereas other insiders did not sell stocks.

Finally, we find insider trading after withholding information is less likely in firms incorporated in U.S. states with stricter disclosure requirements on data breaches. Certain  states require companies to disclose cyberattacks to the state attorney general. For example, companies incorporated in California must notify the California attorney general about data breaches that affect private information of more than 500 customers or individuals. We find managers are less likely to withhold information on cyberattacks and trade on the information in states that require such additional disclosure. The clear requirement to disclose a breach to state agencies marks that breach as a significant event, on which insiders are less likely to trade before its disclosure due to litigation risk. When disclosure requirements are less strict, insiders trade after withholding information on the cyberattack.

Figure 1 presents the abnormal daily net trade for the 20 days before the attack for the three subsamples: Withholding, Disclosing, and Immaterial. As the figure shows, net trading becomes more negative for Withholding companies. Insiders in Withholding companies sell more shares as the discovery of the cyberattack approaches, whereas the pattern for Disclosing and Immaterial subsamples is stable around zero abnormal net trading. 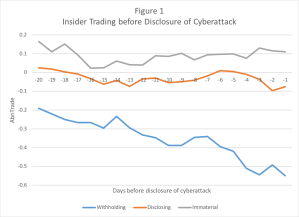 The primary contribution of our study is that it links corporate disclosure policy to insider trading. Specifically, we demonstrate the effect of stricter disclosure rules on insider trading, and show that when managers are clearly required (by state law) to report cyberattacks, they are less likely to trade on the information before disclosing it. However, when disclosure threshold depends more on managers’ discretion, managers are inclined to trade on withheld information.

This post comes to us from professors Eli Amir and Shai Levi at Tel Aviv University’s Coller School of Management and Tsafrir Livne at the University of North Carolina’s  Kenan-Flagler Business School. It is based on their recent paper, “Insider Trading and Disclosure: The Case of Cyberattacks,” available here.