How much compensation does a CEO really end up with? It’s a tough question to answer – the summary compensation table is often cited as what the CEO is paid, but the ultimate value that an executive realized from those grants can differ significantly from the amounts disclosed.

For years, companies have recognized this potential discrepancy; since even before the advent of say-on-pay, companies in perilous performance positions have turned to alternative measures of pay to demonstrate that executives have shared in the pain that investors feel in their portfolio values. These alternatives have included various forms of realizable and realized pay. An early example includes the disclosure below made at least six years ago, which still reflects the types of disclosures we see today: 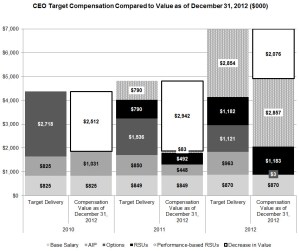 Unfortunately, the market never arrived at a standard definition for realizable or realized pay. Different companies and different compensation consultants arrived at different ways of calculating and presenting these alternative measures, making it very difficult for investors to systematically use these disclosures in the analysis of pay and performance – much to the frustration of investors and companies alike.

However, using a standardized definition of realizable pay – such as the ISS definition – can help investors detect latent pay-for-performance issues, including:

Back to Basics: Different Compensation Definitions

What is Realizable Pay? 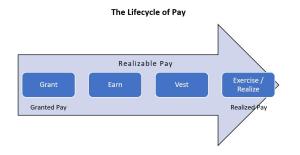 There are many ways to calculate realizable pay, and differences in methodology can result in vastly different values.

The chief factors that influence ISS’ realizable pay calculations are:

Alternative calculation methodologies adopted by companies and compensation consultants typically differ in two main areas: the valuation of options and when the value of performance- and time-based awards is recognized. The intrinsic value calculation for options subtracts the exercise price from the current stock price. This approach can yield dramatically different results compared to the Black Scholes pricing model, because it ignores the time value of the option. Underwater options would be valued at zero under the intrinsic value calculation. The Black Scholes model is more comprehensive in its approach and generally comes much closer to the true value of the option award, although it has been criticized for overvaluing option awards.

On the timing of when to recognize the value of performance- or time-based awards, opinions may differ on whether the awards should be valued when earned, when vested, or at the end of realizable pay measurement period.

The Ratio of Realizable Pay to Granted Pay

Comparing realizable pay to granted pay may serve as a helpful measure to assess a pay program’s alignment with performance as well as the pay program’s “leverage,” i.e., the degree to which actual payouts are disproportionally larger compared to performance achievements. Leverage in pay plan design can serve as a strong motivational factor. However, excessive leverage may lead to excessive payouts and potential a misalignment of incentives. Among the S&P 1500, the ratio of realizable pay to granted pay is distributed in a relatively normal distribution, with median realizable pay figures ranging between 100 percent and 110 percent of granted pay. Approximately 3.7 percent of companies under review have realizable pay figures that are more than double the granted pay levels. 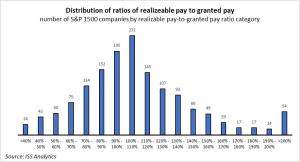 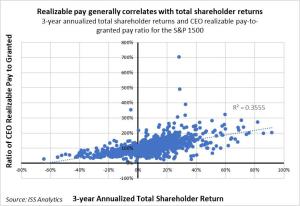 For example, among the 413 CEOs of S&P 1500 companies that experienced negative three-year cumulative returns, 61 executives (15 percent) saw realizable pay figures increase relative to their granted pay (intended pay based on target performance). While these instances do not necessitate a pay-for-performance misalignment, they may include cases that warrant closer examination. At the same time, companies where realizable pay is lower to granted pay despite good performance may also be of interest, as those instances may raise retention concerns.

To identify whether realizable pay can serve as a good measure of pay-for-performance alignment, we linked realizable pay figures to the most recent say-on-pay vote results. In this instance, say-on-pay vote results serve as a litmus test for pay-for-performance alignment based on shareholders’ overall satisfaction with the compensation program. Our analysis shows that when realizable pay as a ratio of granted pay is disproportionately higher than the shareholder returns achieved by the company, support levels on say-on-pay proposals tend to be lower. First, we calculated the ratio of realizable pay to granted pay to measure the degree to which CEO pay increased relative to granted pay during the measurement period. Then, we divided this ratio to the indexed three-year cumulative shareholder return of the company, where the base value for each investment is 1. Therefore, a company with negative cumulative returns of 30 percent would have a value of 0.7, while a company with positive cumulative returns of 50 percent would have a value of 1.5. The combined ratio shows the extent to which pay increased more than performance. If a company’s realizable pay relative to granted pay increased more than the indexed cumulative performance, the combined ratio is greater than 1. Therefore, the higher the combined ratio, the greater the potential disconnect. The graph below shows that companies with higher combined ratios experienced lower support on their say-on-pay proposals. And while 91 percent of votes cast in favor may appear high, this support level is at the bottom quartile of say-on-pay vote results. 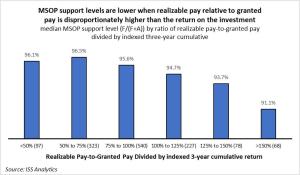 The Future of Realizable Pay

Looking ahead, several questions continue to surround realizable pay. The market does not appear to have agreed on standard definitions, and company disclosures are inconsistent and hard to use. At the same time, there are signs that the measure may be gaining traction with some large investors, as CalPERS recently announced the incorporation of realizable pay in its pay-for-performance evaluation analysis. If usage of realizable pay becomes more widespread, a common definition for the measure may become inevitable. As we argue above, companies and investors can gain significant insights when reviewing pay-for-performance alignment by using realizable pay. However, realizable pay can only serve as another resource in investors’ toolbox for analyzing compensation, and it cannot replace a full and comprehensive evaluation of compensation. ISS Research reports for S&P 1500 companies include realizable pay figures along with comparisons to granted pay.

This post comes to us from Institutional Shareholder Services. It is based on the firm’s memorandum, “Realizable Pay: Insights into Performance Alignment,” dated April 26, 2019.