Thank you, Mr. Chairman, and thank you to the Staff in the Division of Corporation Finance, including John Fieldsend, Elizabeth Murphy, Felicia Kung, Lindsay McCord, and Director Bill Hinman, for their work in developing today’s release. I also appreciate the efforts of my colleagues in the Division of Economic and Risk Analysis, especially Director SP Kothari, Chyhe Becker, and Tara Bhandari.

Today my colleagues propose to roll back the requirement that auditors attest to the adequacy of certain companies’ internal controls. The proposal’s analysis of the costs of attestation is based on data that’s over a decade old, and the proposal makes no real attempt to assess the investor-protection benefits of gatekeepers in our markets. Having conducted my own analysis using data from today’s marketplace, it’s clear that this proposal has no apparent basis in evidence. Accordingly, I respectfully dissent.

In the wake of the Enron and WorldCom accounting debacles that cost American families more than $85 billion, Congress passed the Sarbanes-Oxley Act, requiring companies, executives, and auditors to comply with new rules to restore public trust in our markets. SOX changed corporate oversight across America, making directors and auditors a more independent, meaningful check on executives.

One problem at Enron and WorldCom was that corporate insiders were free to make decisions of enormous consequence without adequate controls to ensure those decisions were disclosed to investors. SOX took two principal steps to address that problem. First, it required insiders to certify the company’s controls in annual reports filed with the Commission. But Congress worried that certification alone might not deter managers from fudging the numbers, so SOX 404(b) also required outside auditors to give an opinion on management’s claim that controls could ensure accurate disclosure to investors.[1] The idea was that, knowing that auditors would review their work, management would be more honest about controls.

While paying auditors isn’t free, neither is fraud. And fraud is more likely when insiders are less careful about controls. That’s why, when we roll back protections like these, we can expect the cost of capital to rise; investors will either diligence the risk of fraud themselves or require higher returns to protect against that risk. There’s a tradeoff; and hard evidence from the market, not ideological intuition, should tell us how to strike that balance.

One reason we’re rushing to roll back these protections is the hope that it will lead to more IPOs.[2] We have tried that experiment before with little success—a result that is hardly surprising, since we have still not addressed the far larger tax companies must pay to Wall Street to go public.[3] But today’s proposal provides a unique window into why those efforts have failed. The reason is that investors know better than Washington insiders about the value of protections like Section 404(b).

The proposal rolls back 404(b) only for smaller companies on the theory that these are the firms for which the costs of attestation are most burdensome. But it’s equally possible that these are the firms—high-growth companies where the risk, and consequences, of fraud are greatest—where the benefits of the auditor’s presence are highest. The proposal uses decade-old data to examine the costs of attestation and makes no serious effort to evaluate the benefits. So my Office conducted an original analysis that shows, for two reasons, why this proposal has little basis in evidence from today’s marketplace.

First, the proposal’s analysis of the costs of Section 404(b) relies heavily on a study using data from 2004 to show that companies with a public float under $75 million—the level under which auditor attestation is not required—seemed to “bunch” under that threshold.[4] In other words, in 2004, companies and their investors found ways to keep their public float beneath the threshold—suggesting that the costs of 404(b) were meaningful for those companies:[5] 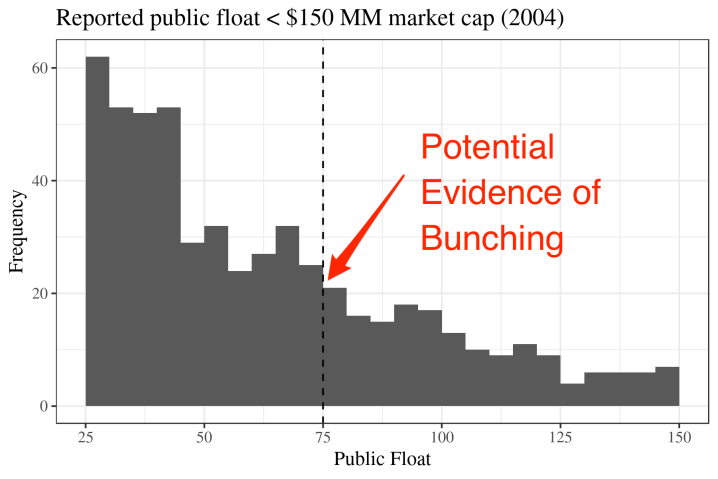 If that were still true in today’s markets, that would offer some basis for this proposal. But it’s not. The proposal makes no effort to update these studies, simply claiming that old data is enough basis for new rules.[7] So I replicated the 2004 study using today’s data and found no evidence of bunching:[8] 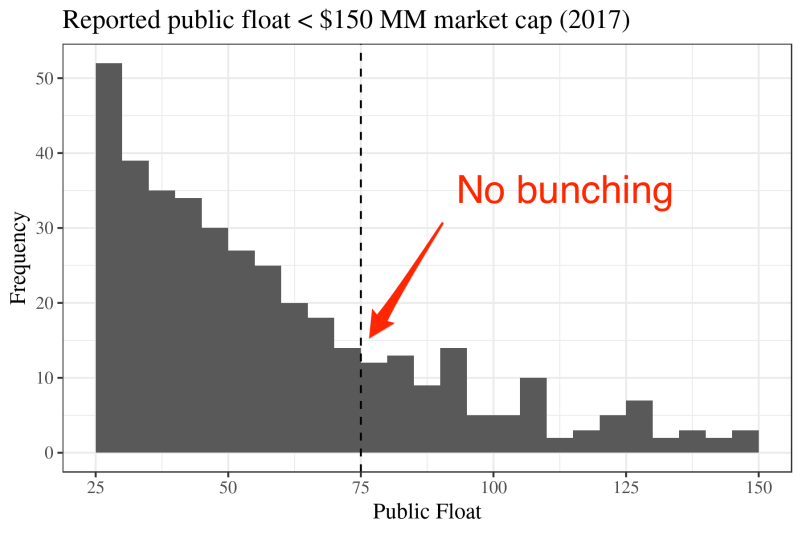 Figure 2. No “Bunching” of Public Float Levels Based on 2017 Data

While the costs of Section 404(b) might have driven the decisions of small firms and their investors fifteen years ago, they don’t do so today.[9] That makes sense, since Commissioners have worried aloud about these costs since SOX became law, and we have taken several steps to minimize them.[10] That’s why, in 2011, the Office of our Chief Accountant examined the costs of the attestation requirement and reported to the Commission that there was no longer any “specific evidence that [any savings from rolling back 404(b)] would justify the loss of investor protections.”[11] I cannot see why we should disregard our Staff’s careful recommendation without updating our evidence for today’s markets.

Second, because this proposal makes no serious attempt to evaluate the benefits of attestation, my Office produced an original analysis on that question, too. We examined how investors react to news of an internal control failure in two groups of companies: those that would receive a rollback of 404(b) under today’s proposals and those who would not. The evidence is striking. The data show we are proposing today to roll back 404(b) for exactly the group of companies where investors care about the benefits of auditor attestation most:[12] 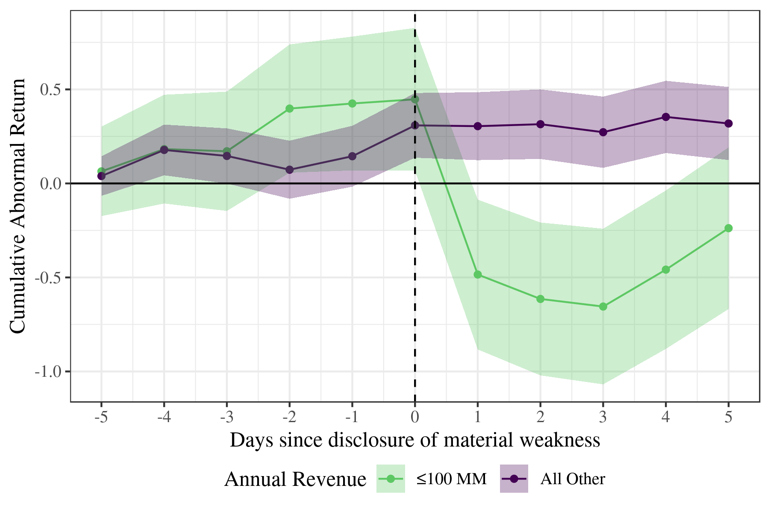 That result has many possible explanations, all of which are worth considering. One is that investors are concerned that companies of this size are particularly prone to accounting issues.[13] But whatever the reason, the data show that investors care most about the information produced by the attestation requirement at exactly the firms that today’s proposal would exempt from Section 404(b). The views of the ordinary American investors who put their savings at risk in these companies deserve far more weight than this proposal gives them.

Today’s proposal makes no attempt to grapple with evidence about the costs and benefits of auditor attestation from today’s markets. Instead, my colleagues propose to resolve a decade-old policy debate with evidence from another era. While the costs of Section 404(b) might have driven the public float of small firms fifteen years ago, there is no evidence of that today. And investors’ decisions in today’s markets tell us that the firms that would not be required to obtain auditor attestation under this proposal are exactly the companies in which investors value it most.

I am grateful to the Staff for their work on this proposal. We hope this evidence will be helpful as the marketplace, Staff, and my colleagues consider whether rolling back Section 404(b) is truly in the interest of investors. And I look forward to hearing from commentators about how the proposal can be improved in ways that would reflect an evidence-driven approach to these critical questions.

[2] Securities and Exchange Commission, Proposed Rules, Amendments to the Accelerated Filer and Large Accelerated Filer Definitions, Release No. 34-____ (May 9, 2019) [hereinafter, “Proposal”], at 84 (“The alleviation of [Section 404] costs could be a positive factor in the decision of additional companies to enter public markets.”).

[6] We describe this evidence of bunching as merely “potential” because this chart does not, of course, provide a formal statistical analysis of bunching activity. When we apply the formal density test that is now the state of the art for such analysis, Justin McCrary, Manipulation of the Running Variable in the Regression Discontinuity Design: A Density Test, 142 J. Econometrics 698 (2008), we find little evidence of bunching in 2004—and none in 2017. Compare Dharmapala, supra note 5. My Office and I are grateful to Professor Dharmapala for candidly discussing that study with us as we considered its implications for my thinking about this proposal. Importantly, the paper pools data from 2003 through 2015, which includes repeated observations of the same firms, which may bias its estimates of statistical significance of bunching.

[7] Proposal, supra note 2, at 71 (claiming on the basis of the 2004 study that “smaller reporting issuers find the total compliance costs [of 404(b)] to be significant,” “and seek to avoid crossing the $75 million threshold.”).

[8] To replicate the work in Iliev, supra note 4, we scraped all annual filings, including amendments and 10-KSBs, searching the text to identify public float numbers. We applied a number of filters and then manually checked all filings in 2004 and 2017 to ensure that the algorithm and filters extracted the correct items. We also compared public float to the reported market capitalization of the firm during the same period, removing any observations that were less than 10%, or more than three times, the reported market capitalization.

[9] Our predecessors have long worried that the costs of Section 404(b) would far outstrip its benefits. See, e.g., Commissioner Paul A. Atkins, Remarks Before the Joint Meeting of SEC Government-Business Forum on Small Business Capital Formation and the SEC Advisory Committee on Smaller Public Companies (Sept. 19, 2005). Based on the data available to them at the time, those concerns had some basis, see Iliev, supra note 4. But as the evidence described here shows, the market has moved on from Enron-era policy disputes—and so should we.

[10] Atkins, supra note 9 (concluding, in the second year of statutory compliance, that it was already “indisputable that everyone greatly underestimated the costs involved in the 404 process”); Commissioner Cynthia A. Glassman, Internal Controls Over Financial Reporting—Putting Sarbanes-Oxley Section 404 in Perspective (May 6, 2006) (“While the auditor attestation [requirement] may provide a benefit, the costs are high.”). In light of the concerns expressed by those and other Members of the Commission, both the SEC and Public Company Accounting Oversight Board provided guidance that has already significantly reduced the costs of 404(b) compliance. Public Company Accounting Oversight Board, Auditing Standard No. 5, An Audit of Internal Control Over Financial Reporting that is Integrated with an Audit of Financial Statements, Release No. 2007-005A (2007).

[11] Office of the Chief Accountant of the Securities and Exchange Commission, Study and Recommendations on Section 404(b) of the Sarbanes-Oxley Act of 2002 for Issuers with Public Float Between $75 and $250 Million (2011). The Chief Accountant’s study followed up on similar work conducted by the Staff in 2009 at the Commission’s request, which similarly concluded, this time from a survey of more than three thousand corporate executives, that “financial statement users . . . generally regarded [Section 404(b)] disclosures to be beneficial and indicated that Section 404(a) and Section 404(b) compliance has had a positive impact on their confidence in issuers’ financial statements.” Id. at 49 & n.86; see also Securities and Exchange Commission Office of Economic Analysis, Study of the Sarbanes-Oxley Act of 2002 Section 404 Internal Control Over Financial Reporting Requirements (Sept. 2009); see also Government Accountability Office, Report to Congressional Committees: SEC Should Consider Requiring Companies to Disclose Whether They Obtained an Auditor Attestation 2-3 (July 2013) (providing a report to Congressional committees regarding the value of disclosures related to auditor attestation).

[12] Figure 3 plots the cumulative abnormal returns in the days around the disclosure of an internal control weakness. The cumulative abnormal returns are calculated on the basis of the Fama French factors plus momentum. Eugene F. Fama & Kenneth R. French, The Cross Section of Expected Stock Returns, 47 J. Fin. 427 (1992). We look at firms with less than $100 million in annual revenues who will be affected by the rule, and put all other firms in another group. The plot shows that, upon the disclosure of an internal control weakness, the market reacts negatively for smaller firms—but, on average, reacts less for such disclosures involving larger companies. The fact that the market does not respond to disclosures of internal control weaknesses for larger firms, on average, is not new. See Messod Daniel Beneish, Mary Brooke Billings, & Leslie D. Hodder, Internal Control Weaknesses and Information Uncertainty, 83 The Accounting Review 665 (2008) (finding no market reaction, on average, following material weakness disclosures in a sample of 383 large firms).

[13] Id. (arguing that the lack of market reaction upon the revelation of material weaknesses at large firms may be attributable to the fact that larger companies have higher audit quality generally—as opposed to those that would receive relief under today’s proposal).

This statement was issued on May 9, 2019, by Robert J. Jackson, Jr., commissioner of the U.S. Securities and Exchange Commission.