As the U.S. annual shareholder meeting season is coming to an end, we review the characteristics of newly appointed directors to reveal trends director in nominations. As of May 30, 2019, ISS has profiled the boards of 2,175 Russell 3000 companies (including the boards of 401 members of the S&P 500) with a general meeting of shareholders in 2019. These figures represent approximately 75 percent of Russell 3000 companies that are expected to have a general meeting during the year. (A small portion of index constituents may not have a general meeting during a given calendar year due to mergers and acquisitions, new listings, or other extraordinary circumstances).

Based on our review of 19,791 directorships in the Russell 3000, we observe five major trends in new director appointments for 2019, as outlined below.

After a decline in board renewal rates in the first years after the Great Recession, boards began to add more new directors starting in 2012 and reached record numbers of board replenishment in 2017 and 2018, as a growing number of investors focused on board refreshment and board diversity. In 2019, the trend of board renewal continued, as we observe relatively higher rates of new director appointments as a percentage of all directorships compared to the beginning of the decade. But overall renewal rates are low. As of May 2019, only 5.3 percent of profiled Russell 3000 board directors were new to their boards, down from the record-high figure of 5.7 percent in 2018. 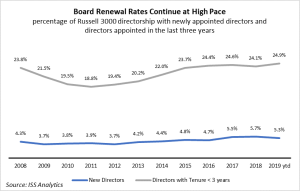 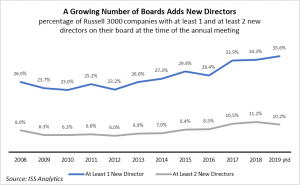 Gender diversity on boards accelerated further this year, breaking another record in terms of the percentage of new directors who are women. In the Russell 3000, 45 percent of new directors are women, up from 34 percent in 2018. Unlike previous years, when the percentage of new female directors was higher at large-capitalization companies, the high rate of new female directors – at almost parity – is consistent across all market segments. Several asset owners and asset managers had voting policies related to gender diversity prior to 2017. However, following State Street’s policy initiative to require at least one female director at every board in 2017, many more large investors have become more vocal about improving gender diversity on boards in the past two years, and many have introduced similar voting policies. We expect this trend to continue, as more investors are beginning to require more than the bare minimum of at least one woman on the board. Proxy advisors also introduced similar policies, with ISS’ policy to make adverse recommendation at all-male boards coming into effect in 2020.

But, more importantly, the push for gender diversity is no longer driven by shareholder engagement and voting only. New regulation in California mandates that all boards of companies headquartered in the state should have at least one woman on their boards in 2019, while at least three women board members are required by 2021 for boards with six members or more. Other states may follow suit, as New Jersey recently introduced legislation modeled after the California law, and Illinois is debating a bill that will require both gender and ethnic diversity on corporate boards.

Given the California mandate (affecting close to 700 public companies) and the continued focus by investors, it is no surprise that smaller firms, where gender diversity has been considerably lower compared to large companies, are revamping their efforts to improve gender diversity. 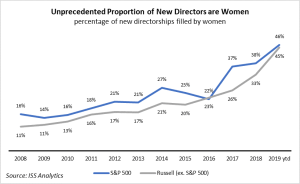 As a result of the record-setting recruitment of women on boards, 2019 saw the biggest jump in the overall gender diversity. The S&P 500 is well on its way to reaching 30 percent directorships held by women in the next couple of years, much earlier than we had predicted in the beginning of last year using a linear regression analysis. Obviously, female director recruitments have seen exponential growth in the past two years, which has accelerated the trend. 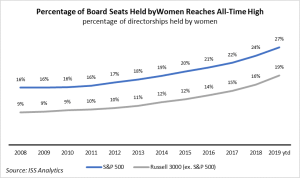 In 2019, we also see record number of ethnic minorities joining boards as new board members, with more than one-in-five new directorships being filled by non-Caucasian nominees at S&P 500 companies, while approximately 15 percent of new board seats at all Russell 3000 companies are filled by minorities (the figure stands at 13 percent when excluding the S&P 500). As the discussion of diversity moves beyond gender, we may see the trend of greater minority representation on boards continue. 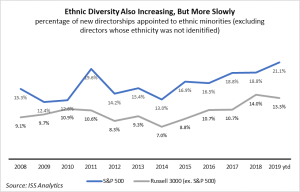 While the trend of increasing ethnic diversity on boards is visible, the rate of change is considerably slower than the trend in board gender diversity. Among board members whose race was identified, non-white, Russell 3000 directors crossed the 10-percent threshold for the first time in 2019, compared to approximately 8 percent in 2008. These figures stand well below the proportion of the non-White population in the U.S. of approximately 40 percent, according to the U.S. census bureau. 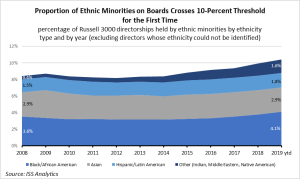 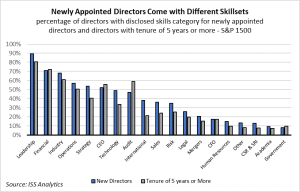 The increase in non-financial skills becomes more pronounced when we look at the percentage difference in the frequency of each skill for new directors compared to directors with tenure of five years or more. Based on this analysis, international expertise, experience in corporate social responsibility, and human resources expertise all increase by more than 50 percent at new directors compared to their counterparts with tenure on the board of at least five years. As sustainability and corporate culture become focus items for many investors and companies, we expect this trend to continue. The percentage of “other” skills, which do not fall neatly into any of the established categories, also increased considerably. The list of skills that rank the lowest in terms of change compared to the tenured directors is telling of the increased emphasis in non-traditional skills: CFO experience, financial expertise, CEO experience, government experience, and audit expertise. 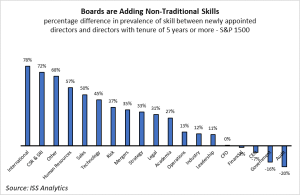 U.S. boards are getting older. During the past twelve years, the average director age in the Russell 3000 has increased from 59.7 years in 2008 to 62.1 years in 2019. This trend becomes apparent when observing the age groups of newly appointed directors. In 2008, approximately 11.5 percent of new director were younger than 45 years, and this number has dropped to an all-time low of 7.2 percent in 2019. The percentage of newly appointed directors above the age of 67 has also been decreasing in the past five years reaching 6.5 percent in 2019, compared to its peak of 10.8 in 2014. 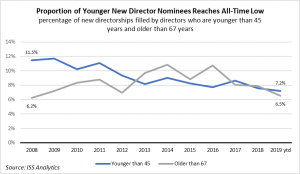 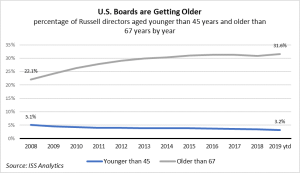 The Changing Landscape for U.S. Boards

The U.S. is experiencing a significant shift in the composition of corporate boards, as the market expects companies to address a new set of challenges and their boards to better reflect developments in society. Board refreshment continues its upward trajectory in 2019, with higher rates of new directors compared to the beginning of the decade. While traditional skillsets remain paramount, we see a greater emphasis on non-financial skills, highlighting the need to focus on corporate culture, sustainability, and technology. At the same time, investors, companies, and regulators recognize the benefits of diversity, as we see record numbers of women and minorities on boards. Experience and qualifications appear more important than ever, which may explain the decline in the percentage of younger directors during the past decade. These trends will likely continue, as investors continue to focus on board quality and governance as a foremost measure for protecting their investments and managing risk for sustainable growth.

This post comes to us from Institutional Shareholder Services. It is based on the firm’s memorandum, “U.S. Board Diversity Trends in 2019,” dated May 31, 2019.