The financial regulatory structure in the U.S. is complex, consisting of multiple agencies with overlapping responsibilities. Regulators have raised concerns that regulatory fragmentation may undermine the stability and efficiency of the U.S. financial system (GAO 2016). In this paper, we suggest that fragmented securities regulation increases information asymmetries and the costs of searching filed documents and thus negatively affects capital markets. Specifically, we examine the consequences of separate disclosure systems due to regulatory fragmentation on stock price efficiency.

Publicly traded banks without a bank holding company (hereinafter stand-alone banks) in the U.S. are exempt from Securities and Exchange Commission (SEC) registration under the Securities Act of 1933 and thus do not submit filings to the SEC through EDGAR. Instead, they file with their federal bank regulator through FDICconnect, a separate filing and dissemination system created by federal bank regulators and administered by the Federal Deposit Insurance Corporation (FDIC). To examine the consequences of the fragmented disclosure system on stock price efficiency, we compare the timeliness of market reactions to Form 4 insider-trading filings on FDICconnect with those on SEC EDGAR, for which prior studies found immediate market reactions (Bolandnazar, Jackson, Jiang, and Mitts 2019; Du 2015; Rogers, Skinner, and Zechman 2016, 2017).

Consequences of the fragmented filing and dissemination system is increasingly important as more bank holding companies consider becoming stand-alone banks due to the increased regulatory burden after the financial crisis. Recently, Zions Bancorp, Bank OZK, BancorpSouth, and Northeast Bancorp dissolved their holding companies. The change in banks’ organizational structure accompanies important changes in requirements for their mandatory disclosure. Publicly traded stand-alone banks file the same Securities Exchange Act filings (e.g., 10-K, 8-K, proxy statement, Form 4) as companies registered with the SEC but to federal bank regulators. This arrangement raises the concern that filings on a separate disclosure system may suffer from lower market awareness and higher search costs, and thus limit the flow of information to financial markets. The SEC expressed concern that filing mandatory disclosures with different regulators “makes it difficult for many investors to know where to find the reports of a particular financial institution” (SEC 1999).

We focus on insider-trading filings to examine the effects of the fragmented disclosure system on stock price efficiency for several reasons. First, whereas other important disclosures such as earnings announcements mostly occur outside market hours, a large subset of Form 4 filings occurs during market hours. Thus, we can observe intra-day market reactions specific to a certain Form 4 filing. Second, Form 4 filings contain useful information in a simple, homogenous format, and thus we compare filings containing similar information on the two different disclosure systems. Third, the information in a Form 4 is not preempted by other sources because it is  disclosed first through FDICconnect or SEC EDGAR by regulation. Fourth, sophisticated investors actively trade on information in Form 4 filings. 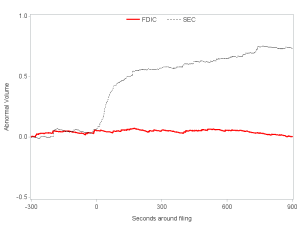 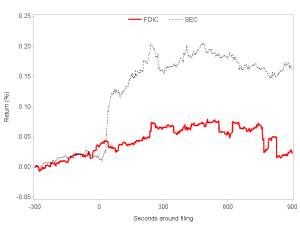 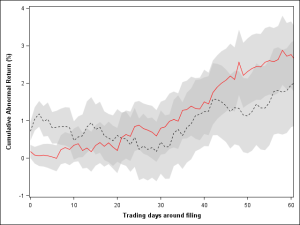 Finally, we run a placebo test using earnings announcements to address concern that the market reaction difference is due to banks’ organization structure rather than the disclosure venues, because the organization structure of a bank solely determines its disclosure venue. In Figure 3, we plot the average two-day abnormal return around the earnings announcement (CAR[0,+1]) for stand-alone banks and bank holding companies by earnings surprise group. Whereas insider-trading activity is first disclosed through a Form 4 filing by regulation, earnings are mostly announced in press releases first and filed on the disclosure system with a significant delay (Bochkay, Markov, Subasi, and Weisbrod 2019). If the market reaction to stand-alone banks’ earnings announcements are delayed as it is for their insider-trading filings, we expect to see smaller negative (positive) reaction for stand-alone banks in the bad (good) news groups compared with bank holding companies. However, we find that the average abnormal returns are not statistically different for most groups and even larger for stand-alone banks in group 2. The placebo test supports our hypothesis that the delayed market reaction to insider-trading filings by stand-alone banks is due to the disclosure venue, FDICconnect, rather than bank organizational structures. 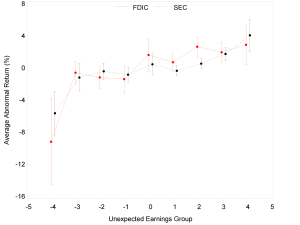 This post comes to us from professors Sehwa Kim at Columbia Business School and Seil Kim at City University of New York’s Baruch College. It is based on their recent article, “Fragmented Securities Regulation: Neglected Insider Trading in Stand-Alone Banks,” available here.