The price of Bitcoin, a cryptocurrency based on blockchain technology, increased dramatically from less than a penny when it was launched in 2009 to $900 in January 2017 and peaked at over $19,500 in December 2017. This rise coincided with a dramatic surge in public interest, debate, and prognostication about the cryptocurrency as well as its underlying blockchain technology. According to Google, “Bitcoin” was the second most searched news term in 2017, ranking just below “Hurricane Irma” and just above “Las Vegas Shooting.” Figure 1 shows that the number of Google searches on “bitcoin,” “blockchain,” and “cryptocurrency(ies)” closely mirrored Bitcoin price and also peaked in December 2017. 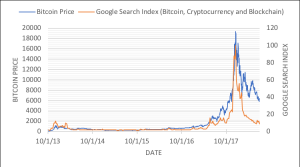 To obtain relevant disclosures, we search through all Forms 8-K filed with the SEC from January 2009, the year Bitcoin debuted, through June 2018. The primary purpose of 8-Ks is to timely report material corporate events. Through the search, we identify 736 8-Ks containing the words “blockchain,” “bitcoin,” or “cryptocurrency(ies)” issued by 224 unique SEC registrants. Our final sample covers 82 public firms with available data. We review each firm’s initial blockchain disclosure and classify the company as a Speculative (Existing) company if its initial blockchain 8-K reveals that the company lacks (has) a significant commitment to or a track record in blockchain technology. Speculative firms are more likely to mention blockchain in a vague way and issue blockchain 8-Ks in the context of board member changes, future plans, developments involving subsidiaries, or investments. Conversely, Existing firms disclose news about more substantive topics that arguably should result in these firms gaining greater economic exposure to the potential success of blockchain technology. Such subjects include mergers and acquisitions, products and services, acceptance of bitcoin payment, and customer exposure. Speculative firms’ 8-Ks are more consistent with hyping the firms’ exposure to blockchain technology, whereas Existing firms’ 8-Ks are more consistent with not hyping the firms’ blockchain exposure. 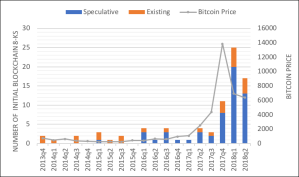 We then look at how investors react to these initial blockchain disclosures. In Figure 3, we plot the short-window buy-and-hold abnormal returns around the initial blockchain 8-Ks (t=0) separately for the Speculative and Existing firms (solid lines), with 10 percent/90 percent confidence intervals (dashed lines). In Figure 3, we observe a strong initial reaction to the blockchain 8-Ks for the Speculative firms while the positive initial reactions are mostly reversed within 30 days. Such evidence supports the concerns of the SEC and the financial press that investors overreact to a firm’s first 8‑K disclosure of a potential foray into blockchain technology. From Figure 4, we observe that the reaction to Existing firms is negligible. Likely, these blockchain activities are described as more substantial in the 8-K, implying that the activities were likely initiated earlier than the 8-K date and may have already been communicated to investors, the media, or other stakeholders, and hence would have already been incorporated into prices. 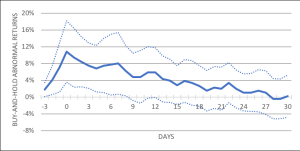 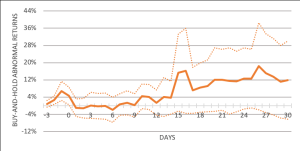 Our interpretation of the findings is that the investors’ overreaction is likely a result of a blockchain mania. As Bitcoin price surges, investors seek exposure to blockchain technology through publicly-traded equity securities given that directly investing in cryptocurrency is inherently riskier. Investors anticipate that firms with greater capacity to sense and incorporate blockchain technology into their businesses will experience stronger financial performance and higher future growth. This expectation leads to increased investor demand for blockchain-related securities. Given the strong demand but limited supply of equity securities in blockchain-related firms, investors are willing to pay a higher price to purchase the stock of such firms. That fuels further demand as stock prices of blockchain firms enter a positive spiral in which high prices paid by investors drive up returns, which in turn drives more demand for the stock of such firms.

We conduct two additional analyses to confirm that our results are consistent with a blockchain mania. First, we find that the initial reactions around the blockchain disclosures are higher when Bitcoin returns are higher, as investors perceive greater value to blockchain technology. Second, we document that the returns of stock portfolios made of Speculative and Existing firms move with Bitcoin returns, consistent with investors subsequently gaining exposure to blockchain technology by investing in firms issuing blockchain 8-Ks. That movement is larger for Existing firms than for Speculative firms.

Overall, our research documents a sharp increase in corporate blockchain disclosures through 8-Ks during a blockchain mania. Investors overreact to the initial 8-Ks filed by Speculative firms, suggesting that investors are at least temporarily fooled. Our findings support related concerns raised by the SEC and the financial press. As a caveat to our study, we take as given the investor demand for blockchain technology – our study has no direct implications for whether investors should or should not be investing in that technology. We also caution investors that, despite corporate managers’ increasing use of the word blockchain in the 8-Ks, few firms have developed successful blockchain projects.

This post comes to us from professors Stephanie F. Cheng, Gus De Franco, and Haibo Jiang at Tulane University’s A.B. Freeman School of Business, and Pengkai Lin, a PhD candidate at the school. It is based on their recent article, “Riding the Blockchain Mania: Public Firms’ Speculative 8-K Disclosures,” forthcoming in Management Science and available here.