The choice-of-law clause is now omnipresent.  A recent study found that these clauses can be found in 75 percent of material agreements executed by large public companies in the United States.  The popularity of such clauses in contemporary practice raises several questions.  When did choice-of-law clauses first appear?  Have they always been popular?  Has the manner in which they are drafted changed over time?  Surprisingly, the existing literature provides few answers.

In a recent paper, A Short History of the Choice-of-Law Clause, I tried to answer some of these questions.  The paper sought, among other things, to determine the prevalence of choice-of-law clauses in U.S. contracts at different times.  The paper also attempted to determine how the language in these same clauses has evolved.

The paper first traces the rise of the choice-of-law clause in the United States over the course of the 19th  and 20th centuries.  It shows how these clauses were first adopted in the late 19th century by companies operating in a small number of industries – life insurance companies, transportation companies, and mortgage lenders – doing extensive business across state lines.  These clauses soon migrated to other types of agreements, including prenuptial agreements, licensing agreements, and sales agreements.  One can find examples of clauses in each of these types of agreements in cases decided between 1900 and 1920.  It is challenging, however, to estimate what percentage of all U.S. contracts contained a choice-of-law clause at points in the distant past.  To calculate this number accurately, one would need to know, first, the total number of contracts executed in a given year, and second, how many of these contracts contained choice-of-law clauses.  From the vantage point of 2019, it is simply not possible to gather this information.

It is possible, however, to obtain a rough sense for the prevalence of such clauses by looking to books of form contracts.  In an era before photocopiers – let alone computers and word processors – lawyers would routinely consult form books containing samples of many different types of contracts when called upon to draft a particular type of agreement.  General form books typically contained hundreds of agreements, organized by type, that could be quickly and cost-effectively deployed by the contract drafter when the need arose.  Since these books provide a historical record of what provisions were typically included from specific types of agreements at a particular time, they offer a potential means by which scholars can get a general sense for the prevalence of the choice-of-law clause in a particular era.  One need only select a well-known form book from a given year, count the number of contracts in the form book, and determine what percentage of those contracts contain choice-of-law clauses. 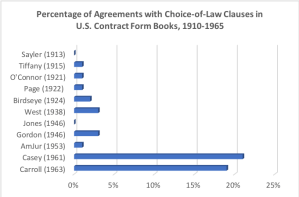 While the clause was known to prior generations of contract drafters, it was not widely used until 1960.  This is the year in which the clause truly began its long march to ubiquity.

The second part of the paper chronicles the changing language in choice-of-law clauses.  This inquiry also presents certain methodological challenges.  It is obviously impossible to review and inspect every choice-of-law clause used in the tens of millions of U.S. contracts that entered into force over the past 150 years.  In order to overcome these challenges, I turned to a somewhat unusual source – published cases.  Over a period of several years, I worked with more than a dozen research assistants to comb through such cases in search of choice-of-law clauses.  Whenever we found a clause referenced in a case, we inputted that clause – along with the year the contract containing the clause was executed and the type of contract at issue – to a spreadsheet.  When the work was complete, I had collected 3,104 choice-of-law clauses written into contracts between 1869 and 2000 that selected the law of a U.S. jurisdiction.  We then set about analyzing the language in these clauses.  In conducting this analysis, I ignored the choice of jurisdiction (e.g., New York or London).  I was concerned exclusively with the other words in the clause (e.g., made, performed, interpreted, construed, governed, related to, conflict-of-laws rules, etc.).

Third, I found that it can be extremely difficult to predict when contract drafters will revise their choice-of-law clauses.  In contemporary practice, one routinely comes across clauses that carve out the conflicts law of the chosen jurisdiction.  (“This Agreement shall be governed by the laws of the State of New York, excluding its conflicts principles.”)  This addition constitutes a relatively recent innovation; the earliest example of such a provision appears in a case decided in 1970.  In the 1980s, roughly 8 percent of the clauses in the sample contained this language.  By the 1990s, the number had risen to 18 percent.  While there is no real harm in adding this language to one’s choice-of-law clause, the overwhelming practice among U.S. courts is to read this language into the clause even when it is absent.  Its relatively rapid diffusion is thus surprising.

Conversely, very few contract drafters revised their clauses during this same time period to select the tort and statutory law of the chosen jurisdiction.  This omission is baffling.  U.S. courts have long held that contracting parties have the power to select the tort and statutory law of a particular jurisdiction in their choice-of-law clauses.  It stands to reason that large corporations (and other actors in a position to dictate terms) would have raced to add such language to their clauses to lock in a wider range of their home jurisdiction’s law to be invoked in future disputes.  The clauses in the sample, however, indicate that the proportion of clauses containing such language held constant at 1 percent to 2 percent throughout the 1970s, 1980s, and 1990s.  The failure of this particular innovation to catch on during the relevant time period is likewise surprising.

The foregoing history looks to contract practice as it relates to choice-of-law clauses in the United States.  There is no reason, however, why scholars in other nations could not deploy some of the same research methods to see if the choice-of-law clauses in their local contracts exhibit a similar trajectory.  Nor is there any reason why scholars in the United States or elsewhere could not deploy these methods to trace the history of other contractual provisions.  (Among other things, my paper contains a detailed discussion of methods.) Most well-resourced law libraries contain old form books that could be productively mined to determined when specific types of contract provisions came into vogue.

This post comes to us from Professor John F. Coyle at the University of North Carolina School of Law. It is based on his recent article, “A Short History of the Choice-of-Law Clause,” available here.