The 2019 proxy season was marked by an increased willingness among shareholders to hold boards accountable on director elections, say- on-pay, and environmental, social and governance (ESG) shareholder proposals. For example, almost 5 percent of directors received less than 80 percent support for her/ his election, which is the highest proportion since the aftermath of the financial crisis.1 This suggests that investors are beginning to hold boards accountable for failing to improve governance practices and integrate ESG considerations into their overall strategy and oversight responsibilities.

The most notable example of investors holding boards accountable took place at companies lacking gender diversity at the director level. Looking at boards prior to proxy season, the number of S&P 500 companies with no female board representation was only 1 percent2; whereas nearly 25 percent of Russell 2000 companies still had no gender diversity at the board level prior to this year’s proxy season.3 This disparity between large-cap companies and mid- and small-cap companies was part of the impetus for the Nuveen Responsible Investing team’s “Women on Boards” engagement initiative, which began in 2018.

The campaign targeted approximately 470 mid- and small-cap companies, requesting that each company either add a female director or adopt a formal policy to emphasize diversity in the board’s nomination process. Since the start of the engagement initiative, more than one-third (180) of the companies added a female director to the board by the end of the 2019 proxy season. Nuveen’s engagement and follow-up also led to positive outcomes at an additional 115 companies. These companies committed to emphasize diversity in their nominating policy, initiate enhanced searches for diverse director candidates, and/or interview a female candidate for their next director.

For those remaining companies that did not take any positive steps to improve gender diversity, shareholders, including ourselves, voiced opposition via proxy votes – resulting in at least one director at 20 percent of the companies to receive less than 80 percent support during its 2019 annual meeting.

The emphasis on board diversity resulted in the highest proportion of newly added female directors in 2019 than in any year prior. For the S&P 500, 46 percent of new directorships were filled by women in 2019. The Russell 3000 (ex. S&P 500) saw a similar proportion at 45 percent.4

However, the growth in new female directors risks understating the gender gap that persists in the boardroom today; according to some studies, gender parity may still be more than 40 years away.5 Further, the low rate of board refreshment impedes the opportunity to increase female representation in the boardroom. While over one-third of companies included a new director nominee in 2019,6 almost one- quarter have a median director tenure of more than 15 years.7 Boards should maintain a boardroom culture and composition that empowers directors to challenge the company’s status quo. 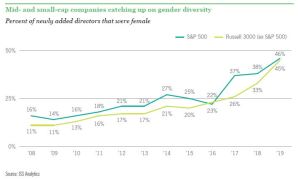 While board diversity and board refreshment were hot topics in 2019, the overarching focus of responsible investing requires a holistic analysis of board structure, operation and quality. Below are two examples where the Nuveen Responsible Investing team held companies accountable for failing to meet governance best practices.

The December market dip highlighted the limitation in focusing pay-for-performance reviews on point- in-time outcomes. The stock market was in a very different state at fiscal year-end when compensation awards were finalized versus when 2019 voting decisions took place. Despite the market volatility and downturn in stock prices at the fiscal year end, CEO pay continued on its upward trajectory. The median pay for S&P 500 CEOs was $12.4 million, a 5.3 percent increase, while the median pay for Russell 3000 (ex-S&P 1500) CEOs was $2.8 million, a 11.1 percent increase.9 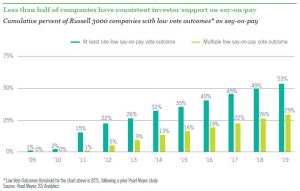 Compensation design is one of the most effective tools boards can use to promote alignment between management’s focus and shareholder interests. The majority of companies have adopted a structure for performance-based awards; however, there is little consistency in the metrics or targets for such awards. In response to the continued increase in pay, Nuveen’s Responsible Investing team currently works closely with portfolio managers to understand how performance metrics relate to a company’s value- drivers. Over the long-term, pay based on rigorous targets for value-creating metrics should align with performance — both rewarding executives for success and holding them accountable for shortcomings.

Below are two examples where the Responsible Investing team’s case-by-case review of the compensation plan design overrode our initial, quantitative-based pay-for-performance analysis.

Alongside increased investor attention to these issues, companies are also recognizing the necessity for environmental and social disclosure, as nearly half of the submitted shareholder proposals (48 percent) were withdrawn after engagement between the proponent and the company.12 Proposals focused on sustainability reporting and climate change (43) were the most common to be withdrawn, followed by diversity proposals (25) and political spending proposals (13).

However, an agreement to provide additional disclosure does not always translate to the effective integration of environmental and social issues into the board’s decision-making process. Engagement is a necessary tool to hold the company accountable for its stated policies and goals, providing an opportunity to discuss key performance indicators and understand how the board and management oversee ESG performance. Investors with a robust engagement practice can require companies to discuss environmental and social risks on an annual basis, regardless of whether a shareholder proposal has been presented for vote at the annual meeting. 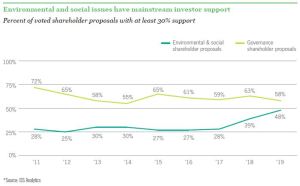 On an equal-pay-for-equal-work basis, a majority of companies report a minimal gender gap or no gap at all. However, this methodology fails to address underrepresentation of women in senior positions, which limits the pipeline of women for executive or board roles. To help address this shortcoming in gender pay data, Arjuna Capital launched a shareholder campaign for 2019 that requests companies disclose the median, or raw, gender pay gap for its global workforce13.

Of the 12 proposals filed, one was withdrawn after the company provided the requested disclosure, and the other 11 went to a vote. The company that disclosed its raw gender pay gap reported a gap of 29 percent, compared to only 1 percent on an equal-pay-for- equal-work basis. For the remaining companies where the proposal went to a vote, three of the proposals received more than 30% support, and one additional proposal received more than 30% support excluding insider ownership. There were three other gender pay proposals filed by other proponents, two of which also received over 30% support. Overall, average support was approximately 25 percent for gender pay proposals during the 2019 proxy season. 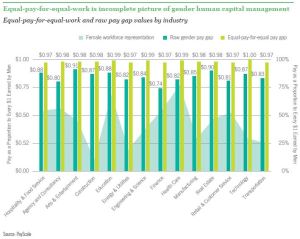 Along with the disclosure of the raw pay gap information, the Arjuna proposal also requested disclosure of “policy, reputational, competitive, and operational risks, and risks related to recruiting and retaining female talent.” These human capital management issues have been a focal point for the Nuveen Responsible Investing team. Below are examples of how Nuveen analyzed the gender-related human capital disclosures of companies targeted by the proposal.

Where We Go From Here

As investors are increasingly holding companies accountable on ESG issues, the marketplace is beginning to scrutinize investors’ voting record and its congruity with their public positions on ESG issues as well. For example, counting the number of engagements is no longer sufficient proof of stewardship; instead, the marketplace is looking to elevate cases where engagement led to positive investment outcomes.

2 Post proxy season, for the S&P 500, the all-male board is now a thing of the past, with the last company in the index without a female director having appointed one in July – https://www.wsj.com/articles/the-last-all-male-board-on-the-s-p-500-is-no-longer-11564003203

3 Source: Conference Board Corporate Board Practices

4 Source: ISS US Board Diversity Trends 2019

5 Source: US Government Accountability Office Testimony before the House of Representatives Committee on Financial Services regarding Strategies to Increase Representation of Women and Minorities

6 Source: ISS US Board Diversity Trends 2019

7 Source: Conference Board Corporate Board Practices

13 Arjuna modeled its disclosure request after the mandatory disclosures on gender pay equity required in the UK.

This post comes to us from Nuveen. It is based on the firm’s memorandum, “2019 Proxy Season Review — Shareholder votes signal rising demand for stronger board oversight of ESG issues.”