Faced with pressures from varied constituencies, compensation committees striving to demonstrate links between pay and performance regularly consider market-based performance measures such as relative total shareholder return[1] (RTSR). Companies reviewing the mix and designs of their long-term incentives (or being pressured into adopting performance-vested awards) may not be comfortable setting reasonable three-year goals—ones that are not a sure bet, but also not unattainable. As compensation committees and management teams review their alternatives, the use of RTSR as a performance metric is typically part of the conversation. Some compensation committees feel a discussion of long-term incentive metrics is remiss without consideration of RTSR, as it is the most prevalent long-term incentive performance metric. For companies finding difficulty setting three-year goals, RTSR requires no goal setting, is simple to adopt, provides a seemingly irrefutable link to shareholder value, and has historically been accepted by shareholders and proxy advisors.

This is the fifth year Exequity has reported on RTSR usage and the seventh year we have tracked prevalence across S&P 500 companies. Historically, RTSR was found primarily within the Energy and Utilities industries, but recent adoptees come from all industries. We analyzed the key design elements of RTSR programs to discern overall trends and implementation differences within industries.

RTSR as a discrete metric is the most prevalent method, used by 79% of companies, while 21% utilize RTSR as a modifier. Among companies employing RTSR as either a metric or modifier, 27% use a broad group (e.g., the S&P 500) and 63% use a more focused peer group. The S&P 500 is used by 22% of companies using RTSR and is most common among Consumer Discretionary and Information Technology companies.

The table below reflects the prevalence of RTSR programs within selected industries. 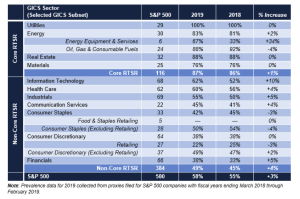 The selection of an RTSR peer group is a critical factor in the establishment of an RTSR program. We separate peer groups used by companies for measuring RTSR into four categories:

Peer group selection across industries may reflect the ease—or difficulty—companies have with picking peer groups and the degree to which companies within certain sectors are comparable to each other. Across the S&P 500, 73% of companies use a focused peer group (industry index or custom group) and 27% use a multi-sector group such as the S&P 500. Overall, 57% use peer groups selected by third parties (i.e., an index, either broad or focused).

Core companies, especially Energy, REITs, and Utilities, routinely use focused peer groups (Materials companies are an exception, discussed further below). Within the Energy sector, 100% of Oil & Gas companies benchmark RTSR against custom groups. This is due to the differing impacts oil prices have on companies within various sectors in the overall industry. For example, a rise (or fall) in global oil prices will affect exploration and production companies differently than oil transportation companies or oil refining companies. In contrast, 45% of Utilities benchmark to a sector index group (e.g., Philadelphia Utility Index) and 38% use a custom performance peer group. Utilities generally are more comparable to each other within the sector than are Energy companies. Based on peer group usage trends, however, some Utilities feel there are enough differences (e.g., regulated versus non-regulated asset mix) to warrant use of a custom group. 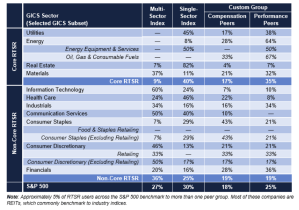 RTSR as a Metric Versus Modifier

Over the past five years, the average weight given to RTSR as a metric has decreased by 6%. Notably, this trend holds across both Core and Non-Core companies. The table below displays the average weight attributed to RTSR (excluding RTSR modifiers).

The table below identifies the ways in which RTSR is used within selected industries. 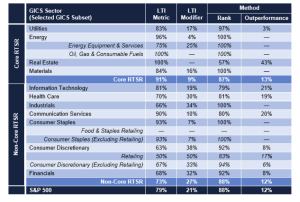 Unlike other design elements of RTSR plans, pay/performance leverage varies less across industries.

Proxy advisors have subjected RTSR plans to an increased level of scrutiny and occasionally criticized companies for prescribing a target-level payout at median performance. In 2016, ISS went so far as to suggest that targeting median performance may not always be defensible. Despite this ISS criticism, 91% of S&P 500 companies target the peer group median for their awards granted annually (a decrease of 2% from 2018 of companies targeting above-median performance). Among those targeting above the median, 41% target the 60th percentile, 56% the 55th percentile, and one company targets the 75th percentile. In cases where RTSR is used as a performance measure for a one-time award, companies may receive more pointed criticism from proxy advisors for targeting the median.

An increasing number of companies are imposing a “cap” on RTSR payouts when absolute TSR is negative. Compensation committees are increasingly uncomfortable with the possibility of above‑target RTSR payouts when shareholder returns over the measurement period are negative. Shareholders and proxy advisors tend to favor capping awards at target when absolute TSR is negative. Currently, 25% of S&P 500 companies disclose caps on RTSR awards. Despite the attention negative TSR caps have received, prevalence increased just 5% from 2017 and 2% since 2018.

Since RTSR is a naturally volatile incentive metric, companies commonly employ stock price averaging to smooth out the impact of daily stock price movements on relative performance at the beginning and end of the performance period. Among those companies disclosing averaging periods, approximately 60% use a period of one to four weeks (e.g., five trading days to 30 calendar days), with 20 trading or 30 calendar days being the most prevalent periods. Among the remaining companies, 25% use a period of five to ten weeks, and 15% a period of 90-calendar days or longer.[6] Stock price averaging periods are commonly viewed as shareholder-neutral.

RTSR’s rise may be attributable to a confluence of factors, such as say-on-pay and the influence of proxy advisors pressuring companies to adopt performance-vested long-term incentives. Companies feeling pressure to adopt performance-vested awards and respond to unfavorable say-on-pay outcomes often turn to RTSR. It has been accepted as an objective, shareholder-friendly method for companies to demonstrate a commitment to performance-based pay that does not require a company to set goals—a difficult exercise for some companies.

Will the tide ever turn on RTSR?

In 2018, ISS acquired EVA Dimensions LLC, a firm founded by Bennett Stewart, one of the original creators of Economic Value Added (EVA). Mr. Stewart, now an ISS Senior Advisor, and ISS have published several whitepapers touting EVA as an alternative method for identifying companies with superior performance and how it can be used in relative performance assessments.[7] During the 2019 proxy season, ISS included relative EVA performance assessments in its proxy reports (in the pay-for-performance section). In May 2019, ISS published materials suggesting that some companies may be too reliant on RTSR in their performance-based pay programs. This observation by ISS is particularly notable since ISS can arguably be credited with generating the tide of companies adopting RTSR over the past seven years. When ISS embraced RTSR in its pay-for-performance tests, companies under pressure from ISS to change their pay programs regularly turned to RTSR because it had the appearance of being implicitly sanctioned by ISS. After all, if RTSR is relied on by ISS as a fair barometer of performance measurement, it must be a good measure to assuage ISS and investors that a company’s long-term incentives are sufficiently performance-based. Looking ahead to 2020 and beyond, with ISS’s laser focus on EVA, momentum may be building towards ISS’s research arm incorporating EVA into its policies, possibly as a counterweight to RTSR.[8] ISS is expected to incorporate EVA as a “modifier” in the quantitative tests, similar to the current GAAP-based Financial Performance Analysis.

Regardless of ISS’s views (or its potentially changing views), companies are unlikely to entirely abandon RTSR anytime soon, though we expect the trend towards reducing RTSR’s impact will continue. With ISS’s embrace of EVA, some compensation committees feel inclined to discuss and analyze the merits of EVA. When ISS adopted RTSR in its quantitative tests, many companies under shareholder/ISS pressure (or seeking to avoid such pressure) adopted RTSR in response (or as a shield). Time will tell whether companies (and investors) embrace EVA as they did RTSR when ISS incorporated it into its quantitative pay-for-performance tests. 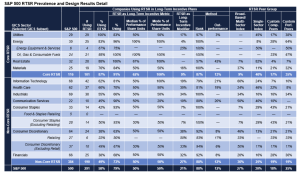 [1] Total shareholder return is defined as the change in stock price plus reinvested dividends.

[2] In prior years this range was 40%–50%, but prevalence has increased across Information Technology, Health Care, and Industrials sectors.

[3] For example, the share price of a Health Care equipment company reliant upon a certain precious metal (presumably provided by a Materials company) may exhibit sensitivities to the price swings of this commodity, but this will be one of many factors impacting this hypothetical Health Care company’s share price. The precious metal company’s share price will show much greater—and direct—sensitivity to the same price swings.

[5] A company employing this method compares its TSR to that of the index composite figure and adjusts payouts based on the spread between the two figures. For example, if the company’s TSR is 15% and the index composite TSR is 5%, then the company beat the index by 10 percentage points. Assuming a payout of 2% of each percentile of outperformance, this would yield a 110% payout.

[6] Not all companies using averaging periods disclose them in proxy filings.

[8] The interplay between ISS’s need for revenue generation from its consulting arm and the voting policies adopted by ISS’s research arm is a topic outside the scope of this Client Briefing.

This post comes to us from Exequity LLP. It is based on the firm’s client briefing, “2019 Relative TSR Prevalence and Design of S&P 500 Companies.”