Over the past half dozen years, the three of us have written a number of papers on sovereign bond contracts.  In the first set of papers, we documented the stickiness phenomenon (the reluctance of lawyers to modify standard contract language even though obsolescence posed a significant risk of misinterpretation). In the second set of papers, we studied the phenomenon of random mutations to the standard form language that occurred without an apparent rational purpose (here, here, and here). Both findings seemed completely at odds with the standard account of how sophisticated lawyers drafted multi-billion dollar financial contracts.

In presenting our work to both scholars and lawyers, we received a common objection to any attempt to generalize from this research. Sovereign debt, we were told, is an atypical context: It is driven more by politics than law. The inference was that in more heavily negotiated transactions, such as M&A deals by private equity firms, the stickiness phenomenon would likely disappear. Lawyers in these markets carefully revise their contracts to account for changes in the law or the market environment.

As the body of literature documenting stickiness or random mutations in markets other than sovereign debt has grown, it has become easier to answer the foregoing objection (see here, here, here,and here). But the question of whether phenomena such as stickiness occur to the same degree in different markets remains an important area for further study.

The comparison of private equity driven M&A transactions with sovereign bond contracts is particularly relevant if one believes that agency problems are at the heart of the stickiness phenomenon. In prior work, we hypothesized that stickiness in sovereign debt contracting occurred because the agents driving the transactions (government officials on the sovereign side, underwriters on the investor side, and their lawyers on both sides) had strong short-term incentives to get the deals done and move on. And the key principals – the citizens of the sovereign debtor and the bond investors – were highly dispersed and uninformed of the consequences of obsolete contract terms that were only triggered if the debtor defaulted.  Obsolete contracts might produce high costs later, but the agents who failed to revise those terms were likely to be long gone by then.  By contrast, we hypothesized, this agency problem was unlikely to be present in the same degree in the world of private equity acquisitions (a context with many fewer investors, who had both more to both gain and lose by failing to revise an obsolete term.).

What we needed to test the hypothesis was to find a provision that was used in both private equity contracting and sovereign bonds.  We didn’t find that, but we did find – thanks to a 2011 article in the Business Lawyer by Weil Gotshal M&A lawyers, Glenn West and Natalie Smeltzer (here) – a provision that allowed us to run a horse race by comparing the same obsolete boilerplate term in private equity contracts and public company bond indentures (the agency problems in the public company bond deals are not as severe as in sovereign debt, but likely more prevalent than those in private equity deals).

The clause is the No Recourse provision that has its origins in the late 1800s and has been reproduced ever since in corporate bond indentures (even during periods where it was utterly pointless).  Oversimplifying, this clause is essentially the contractual equivalent of the limited liability protection that every state’s corporate law provides today (but did not in the late 1800s).  In the past few decades, though, this clause has also become important in the private equity world.

Now, for the horse race. Over the past few decades, there have been a series of cases – many in Delaware, but also in other jurisdictions – that have essentially limited the protections of the standard No Recourse clause to issues of contract liability (for more detail, see here). This left the equity holders vulnerable to liability claims based on tort and other equitable theories.  As West and Smeltzer explain in their 2011 Business Lawyer article, the emerging case law should have motivated parties to modify the standard clause to better protect against these non-contractual claims.

Looking at a random sample of over 600 private equity contracts and public company corporate bonds from January 1, 2005 to June 1, 2019, we asked: Did either the private or the public market revise the standard No Recourse provision in response to the case law, and was one market stickier than the other? (The paper, Revising Boilerplate: A Comparison of Private and Public Company Transactions is here).

Multiple caveats are in order, such as the limitations in our sample (drawn from mandatory SEC filings) and so on. But the preliminary results, we think, are striking.

Figure 1 from our paper is reports on the public company bond deals.  There are some but not many changes to the No Recourse clause (“New” and “Modified” clauses are the ones that were revised; “Old” terms are the obsolete clauses). 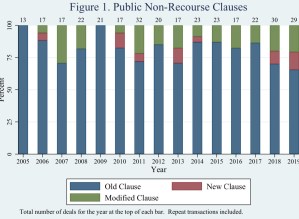 By contrast, look at Figure 2, which reports on Private Equity contracts.  Over 50 percent of these are revised, starting in 2012. 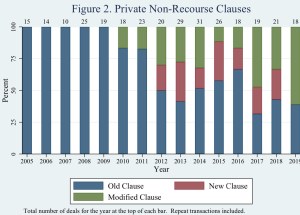 If we confine ourselves to looking at just the deals done by the top five law firms in the private equity industry (Figure 5 from our paper) the results are even more startling – starting in 2012, basically every contract gets revised. 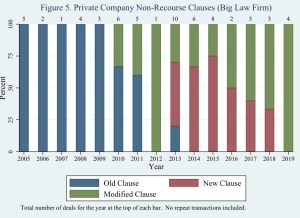 Do these results show that the stickiness phenomenon occurs primarily in the large markets characterized by public company or sovereign bond contracting?  Well, yes and no.

If we were studying just the private equity data, we would probably conclude that contracting in that industry was quite sticky as compared with the ideal of lawyers promptly reacting to changes in the case law (remember: The cases here occurred many years prior to 2012; some in the 1990s).  And we would ask why 2012 was the year when the changes were generated (it turns out that in that year there were a series of industry meetings at which senior lawyers such as Glenn West exhorted their colleagues to reform their clauses).  That said, when compared with the corporate bond market, the speed of change in the private equity market seems extraordinary.

Bottom line:  Our critics were both right and wrong.  They were right that private equity contracts do change a lot faster than public company bond indentures. They were wrong, however, that we would not find stickiness in the private equity markets.

As an aside, our sample of sovereign debt contracts containing these No Recourse provisions is very small – about 20 quasi-sovereign bonds from 2005-2019 – and hence we don’t use them in our article.  But it is worth noting that not a single word changed in the No Recourse provisions in those bonds during the period of our study; they are still using the version of the clause from the late 1800s.

We have likely only touched the surface of the question of how contract language evolves differently across different markets and different practice areas (and perhaps across types of clauses and legal jurisdictions as well).  More specifically, we still do not fully understand why 2012 caused the sudden burst of change in the private equity market and why especially so for the top law firms.  We speculate that this change occurred when the market was able to coordinate on a standard revision and that the top law firms were better positioned to effect that coordination.  By coalescing around a standard change to the No Recourse clause, these firms were able to overcome the reluctance of individual lawyers to revise the language in their contracts unilaterally. In any case, the findings thus far suggest that the differences across markets can be stark – and those differences may be our pathway to understanding why phenomena such as stickiness and random mutation occur in contracts among even highly sophisticated parties.

This post comes to us from professors Stephen J. Choi at NYU School of Law, Robert E. Scott at Columbia Law School, and G. Mitu Gulati at Duke University School of Law. It is based on their recent article, “Revising Boilerplate: A Comparison of Private and Public Company Transactions,” available here.