A folk proverb from the American West teaches that the most important ingredient of a successful rain dance is timing. And the timing couldn’t be worse for signed corporate deals hanging in the balance at the onset of the novel coronavirus pandemic.  As of this week, we estimate that there are just under 150 significant mergers and acquisitions (M&A) transactions signed and waiting to close, representing over half a trillion U.S. dollars in economic value. The fate of these deals has been thrown into considerable doubt by the COVID-19 crisis. And, in an uncanny resemblance to the onset of the financial crisis in fall 2008, corporate lawyers everywhere are spending their shelter-in-place hours scouring the terms of these deals in a frenzied search for an escape hatch that might unwind the transaction.

In lawyer-speak, the most likely candidate for an escape-hatch is something called a force majeure (or “Act of God”) provision, which governs when changed circumstances are deemed so significant as to obliterate an otherwise enforceable contract. In business lawyer-speak, force majeures are usually called “material adverse change/material adverse event” (or MAC/MAE) provisions; but they work pretty much the same way, conditioning a party’s (usually the buyer’s) duty to close a deal on the non-occurrence of a specific set of contingencies. MAC/MAEs are virtually ubiquitous in M&A; and – unlike many other boilerplate terms – they are heavily negotiated at the time of the transaction. This is for good reason: When a MAC/MAE is triggered, billions of dollars can hang in the balance.

Some very recent deals – such as Morgan Stanley’s acquisition of E*Trade (announced on February 20) – explicitly account for COVID-19 through their MAC/MAE, typically deeming it not to constitute a force majeure. But most “legacy” transactions – signed before the coronavirus threat exploded – are far more opaque. Consider, for example, LVMH’s pending $16 billion acquisition of Tiffany & Co., announced in late 2019 and subsequently approved by Tiffany shareholders but still not closed. The MAC/MAE in that deal is representative, featuring both affirmative and negative provisos that can be thought of metaphorically as something akin to a slice of Swiss cheese:

Conspicuously absent from either the cheese or the holes in the Tiffany deal is any explicit mention of a global pandemic. It seems likely that colorable arguments might be made on both sides. Although many of the items enumerated in the affirmative provisions may well be captured by the COVID-19 outbreak, several exclusions could touch on it as well. This deal may thus fall into a relatively difficult and far grayer (if not Gruyère) zone.

And that prompts the question of whether the language of MAC/MAE provisions in the aggregate might be used to unwind signed deals in the face of a pandemic. To get a handle on this question, we deployed some tools of machine learning and natural language processing, an approach that has already been shown to be helpful in studying MAC/MAE provisions as well as other business contracts.

We make use of a turnkey-ready data set that we previously collected and cleaned, consisting of 1128 MAC/MAE provisions and meta-information associated with the deals (all drawn from FactSet). The combined volume of the deals is $7.5 trillion. The dataset covers acquisitions in 21 distinct industries for deals spanning the years 2003 through the end of 2018, thus providing a broad view of over 15 years of market practice (including, importantly, the financial crisis). (We are working to update this dataset to include pending transactions to confirm their similarity, and we plan to post the results.)

In analyzing the MAC/MAEs, we focused explicitly on language that expressly captures a global pandemic like COVID-19. To ensure that we capture all (or nearly all) of the language relevant to COVID-19, we assembled a list of the terms most similar to the words “disease” and “pandemic” from three data sources: (i) WordNet, a large lexical database of English maintained by language experts; (ii) GloVe, a representation of ordinary English language; and (iii) Contracts-word2vec, a language model based on roughly half a million agreements submitted to the SEC by publicly registered companies. We then verified the results by hand. The resulting vocabulary includes terms specific to the outbreak of a contagious disease, such as “pandemic,” “epidemic,” and “public health.” But our list also includes broader, more general terms such as “act of god” and “force majeure” – gray area terms that do not explicitly cover pandemics but arguably could. The complete list contains a total of 50 key terms. Within our data set, 15 of these terms appear with positive frequency, as reflected in the figure below: 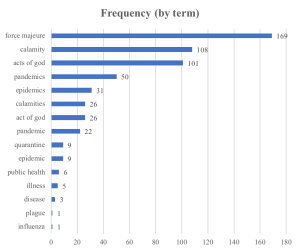 Applying this list to our MAC/MAE data, our key finding is that – much like the LVMH/Tiffany agreement discussed above – less than one out of 10 MAC/MAE provisions explicitly carve out pandemics from force majeure events. Indeed, as the figure below shows, the majority of definitions – around six in 10 – do not even address a pandemic (or pandemic-like) outbreak, either with explicit terms or with catch-all terms (such as “Act of God”, “Calamity”, or “Force Majeure”) that arguably have sufficient breadth and scope to do so. Of the remaining 40 percent that arguably address COVID-19, the trigger usually comes through the broad, catch-all provisions (31.6 percent) rather than through an explicit phrase related to pandemics (8.3 percent). 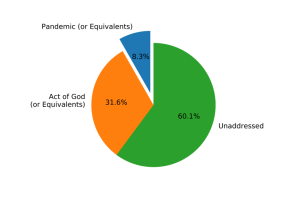 And, when a MAC/MAE provision does feature language bearing on a pandemic via either explicit or general terms, it invariably enters through a carve out to the MAC/MAE (the holes in the cheese) rather than through an affirmative provision. Consequently, such provisions (when included) would appear to push pandemic-related risks onto the buyer (and away from the seller). A typical example of an explicit pandemic-like provision is the private equity acquisition of the telecom company ComScope in 2010. That provision reads (in relevant part):

“Company Material Adverse Effect” means a change, event or occurrence that has a material adverse effect on the financial condition, business or results of operations of the Company and its Subsidiaries taken as a whole; provided, however, that none of the following, and no changes, events or occurrences, individually or in the aggregate, to the extent arising out of, resulting from or attributable to any of the following shall constitute or be taken into account in determining whether a Company Material Adverse Effect has occurred or may, would or could occur:

This clause is a good indication of the typical location of an explicit provision (in the carved-out Swiss-cheese holes in the MAC/MAE); but it also exposes a caveat that is analogously important: Many acquisition agreements, after expressly carving out contingency from the definition of a MAC/MAE, proceed then to carve it back in if the pandemic affects the seller disproportionally, usually relative to a benchmark of other competitors in the industry.

In fact, as the figure below demonstrates (left-hand panel), a strong majority of express pandemic carve-outs in our data set carve them back in if the seller is disproportionately affected. This tendency towards carve-ins for disproportional effects, moreover, appears to hold even when the carve-out uses more general provisions (right-hand panel), focusing on broad act of god contingencies (rather than pandemics in particular). 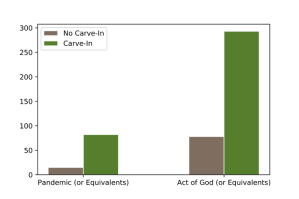 The upshot of this observation is that, for most deals, the question of whether COVID-19 triggers the MAC/MAE clause may turn further on a finely-grained analysis of how the pandemic has affected a company vis-à-vis its peers. For targets that are especially susceptible to pandemic risks relative to others in the industry, then, the “disproportional effects” carve-in would shift risk right back to the seller.

A second pressing question is whether the more general language carving out acts of god and force majeure events from the MAC/MAE definition should be read to apply to COVID-19 in the first place. In other words, should one of these general terms be interpreted as a semantic substitute for an explicit term that invokes pandemics? One way to get at that question is to look at the text of the MAC/MAE definitions themselves – and in particular the frequency with which we observe pandemic-specific language enumerated as an example of an act of god or force majeure event.

The figure below displays the relative degree to which explicit and catch-all terms are used as complements versus substitutes. 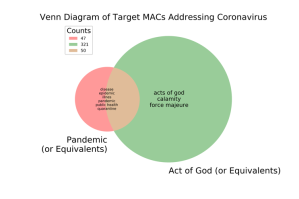 As one can see, when specific language is invoked, it tends to split evenly between (a) being an enumerated example of a general force majeure provision; and (b) standing alone without also invoking the more general language.  Although this result may be consistent with a variety of interpretive theories, it does seem (at least to us) inconsistent with some of them. For example, it would seem to cast doubt on the argument that general force majeure language can never be interpreted as including pandemic risks, since a large fraction of MAC/MAE provisions make the connection explicitly. But it also casts some doubt on the opposite proposition that general language always captures specific pandemic risks: Indeed, in our reading, the vast majority of provisions with general language tend to enumerate a variety of different specific contingencies (such as weather, climate change, terrorism, and the like), perhaps making it telling that the pandemic language is not included as an enumerated example.

Ultimately, for such provisions, the proper interpretation may well be up to courts and lawyers to work out, if (as we expect) buyers begin to assert walking rights on the basis of a less-than-clear MAC/MAE. This was a situation not unlike that faced in the Hexion v. Huntsman case over a decade ago (when the buyer was unable to carry the burden of showing that the provision was triggered). It is important to note, however, that Hexion unfolded before any Delaware court had sided with a recalcitrant buyer wishing to trigger a MAC/MAE.  That historic losing streak changed with 2018’s Akorn v. Fresenius opinion, which allowed a buyer to walk on a deal by virtue of a triggered force majeure provision. And while the specific facts of Akorn are not germane to the current setting, the precedent will probably uncork a re-escalation of legal kerfuffles over deals where the COVID-19 pandemic has arguably triggered a MAC/MAE.

And that observation brings us to a final prediction, which our analysis permits us to state with some degree of confidence: If you are an M&A litigator on either the plaintiff or defendant side (and you remain healthy over the next few months), your timing couldn’t be better.