Companies recognize the importance of environmental and social (E&S) factors and are giving consideration to a broader group of stakeholders to help mitigate risk. However, new regulations bring uncertainty to the future of environmental, social and governance (ESG) proposals.

The rapid spread of the coronavirus is roiling global markets and testing companies’ abilities to handle such a significant crisis. While many aspects of the current outbreak are certainly beyond issuer control, strong company ESG management plays an important role in mitigating downside risk and preserving long-term value. Conversely, poor ESG management could lead to greater negative impacts and a longer road to market recovery.

Across industries, strong corporate governance is a fundamental factor in ensuring business continuity and resiliency in the face of any major event. Board independence, oversight accountability and diversity, in addition to executive compensation that is aligned with long-term value creation, drive better operational strategies, risk mitigation frameworks and problem-solving.

Over the last several years, ESG practices have become a priority at both the corporate and investor level, with a growing demand from clients and the marketplace for corporations to show conviction on ESG-related issues.

Many corporations are modernizing their standards for corporate responsibility to meet these new expectations. In August 2019, the Business Roundtable (BRT), an association of CEOs at major U.S. companies, unveiled a new “Statement on the Purpose of a Corporation.” Illustrating the emerging trend of “shareholder capitalism,” the BRT statement, which was signed by 181 CEOs, pledged to create value for a broader range of stakeholders beyond just company shareholders, including employees, customers, suppliers and communities. These stakeholders are now holding corporations accountable for following through on the broad adoption of ESG policies.

Regulators, clients and activists regularly criticize investment firms that publicly espouse the importance of ESG factors but fail to engage or vote in accordance with their commitments and accuse them of “greenwashing” activities. During the 2020 proxy season, we expect corporations who fail to adequately address E&S issues to face additional scrutiny from stakeholders. We also expect climate change and board and workforce diversity to remain top priorities.

E&S TOPICS ARE TOP OF MIND FOR INVESTORS 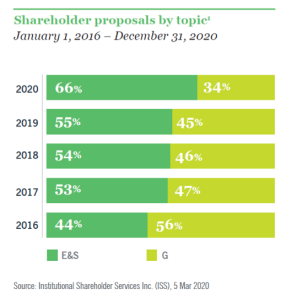 The range of E&S topics facing companies is broad. In 2019, political contributions and lobbying proposals, followed by climate change-related proposals, ranked number one and two in filing and votes, respectively. Given the 2020 presidential election and growing environmental concerns worldwide, we expect this trend to likely continue. The number of proposals around gender equity, board diversity and human rights issues also increased in 2019 and will likely remain in focus this year.

While E&S proposals continue to gain prominence and support, the overall volume of shareholder proposals will likely decline. In 2019, the volume of such proposals decreased by 6.6% for Russell 3000 companies and 10.5% for those in the S&P 500. This is in large part due to companies recognizing the necessity to engage with investors on E&S issues and voluntarily increase their disclosures. In 2019, nearly half of the submitted E&S shareholder proposals (48%) were withdrawn following successful engagement. 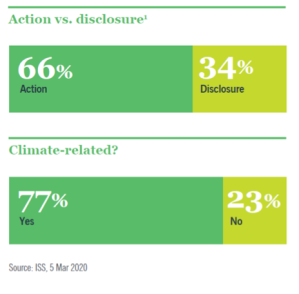 Issues around gender parity and board and workplace diversity have been at the forefront of investors’ minds for years. However, as stakeholders urge companies to adopt broader diversity criteria for potential candidates, we expect this pressure to move beyond gender parity as companies seek to promote diverse directors and employees to leadership positions.

In previous years, investors were primarily focused on adding women to historically male-dominated boards, which research has shown helps boards reduce group-think, improve risk management and better understand the diversity of their customers and workforce. Proving that these efforts have been successful, there was at least one female board member at every company in the S&P 500 as of July 2019. Now, as the focus shifts toward ensuring other under-represented groups also have a seat at the table, stakeholders have begun to ask for disclosures around diversity statistics. Some proposals have called for companies to adopt the “Rooney Rule” in their search, which is a reference to the NFL practice requiring boards to interview minority candidates when recruiting new directors and CEOs.

But stakeholders know that diversity is not synonymous with inclusion, and pressure is mounting on companies to appoint women and minorities to board leadership positions. While every company in the S&P 500 has a woman in a board position, 29% do not have a female in a board leadership position. That number increases to 49% for companies in the Russell 3000.1 Activists are calling on companies to disclose how they incorporate diversity into their search and selection criteria. While the financial, utilities and health care sectors are more inclusive in appointing women to board leadership positions, the consumer, industrials and communication services sectors lag.2,4 Furthermore, as of the end of 2019, there were only 22 female CEOs at S&P 500 companies.3 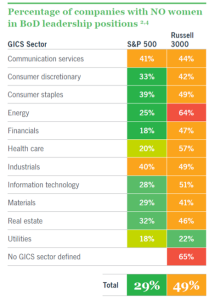 Beyond shareholder demand, companies recognize that workforce diversity, workforce compensation (equal pay for equal work) and inclusive workplace cultures are key components of a competitive strategy. Many companies are already working to address these issues both practically and within their disclosures. In 2020, there will likely be an increased number of proposals submitted requesting transparency on pay equity, as well as goals and trends for the promotion, recruitment and retention of minority employees.

When it comes to E&S metrics, shareholders recognize they have the power to preempt potential reputational and economic crises by linking E&S measures and objectives to executive pay. This type of executive accountability – which may include meeting target emissions or energy usage goals, workplace diversity efforts or cybersecurity initiatives – provides the opportunity to align incentive pay with E&S-focused business strategies and KPIs to create long-term shareholder value. It also mitigates any potentially excessive risks or management oversight.

We have already seen multinational companies integrating E&S metrics into executive compensation plans. Corporations like Alcoa, PepsiCo, Mead Johnson, Royal Dutch Shell and Boeing have all taken steps in this direction, both as long-term incentives and as factors in their “clawback” policies.

While we don’t expect the topics of E&S and executive compensation integration to dominate the 2020 proxy season, it is an emerging trend poised to gain popularity over time. Prominent companies like Apple, Amazon and United Airlines have already received shareholder proposals targeting this objective.

Responsible investing is a focal point for many global policymakers who recognize the connection between the financial system and broader ESG issues. However, the U.S. lags its global peers, and policy changes recently enacted by the Securities and Exchange Commission (SEC) will likely create new impediments for shareholders, specifically investors, focused on ESG initiatives.

The SEC’s proposed changes will affect the process for filing shareholder proposals by raising the eligibility and resubmission thresholds, potentially disenfranchising smaller, less-wealthy investors focused on ESG and stifling the dialogue on emerging issues.

Additionally, while the SEC’s proposed changes to the “no-action” process will reduce the review burden on the SEC, it will have negative implications for both company management and shareholders by potentially creating uncertainty around the specific shareholder proposals to include in proxy statements. This could result in increased legislation and reputational risk, forcing parties to turn to the courts to adjudicate shareholder proposal disputes.

Lastly, the SEC’s proposed change to add a period for review and feedback of a proxy advisory firm’s voting advice before it is disseminated to the client will impede investors’ ability to make informed proxy voting decisions on a cost-effective and timely basis.

Although the SEC’s policy changes will not go into effect in the 2020 proxy season, the amendments create an environment of uncertainly around critical ESG topics. These changes will curtail important shareholder rights and restrict shareholders’ ability to meaningfully engage with company management.

Despite potential regulatory hurdles for E&S proposals, we expect continued support from shareholders. This volatile time has truly highlighted the need for strong ESG practices, which have proven to be an accurate proxy for corporate risk management and responsible resiliency planning.

1 Universe comprises ISS-defined “All Industry” and “All Indices” companies. Categorization of ESG shareholder proposals based on ISS sub-category.

This post comes to us from Nuveen. It is based on the investment management firm’s memorandum, “Environmental and social practices reach a tipping point,” available here.