Despite long-standing efforts to understand the proxy advice market, there is no way to identify the firms that supply specific investors with proxy advice, making claims about market shares conjectural at best. Nevertheless, it is widely believed that ISS and Glass Lewis control 97 percent of the market. However, ISS itself refutes this figure, saying it “is not a statistic we have verified or can confirm”. [1] In a new working paper, I use a largely unnoticed feature of regulatory filings to identify mutual funds’ voting platforms. I then provide what may be the first detailed depiction of the proxy advisory industry and proxy advisers’ influence on their customers.

Since 2003, mutual funds are required to report their entire voting records to the Securities and Exchange Commission on Form N-PX. A special feature of the form is that the SEC does not require a uniform “information table” for mutual funds to complete. Neither does it provide guidance on how to describe details of proposals. On the other hand, mutual funds rarely execute, manage, or report their votes themselves. Instead, they outsource those tasks to voting platforms. That implies, by linking the filing styles of mutual funds’ N-PX forms with those of voting platforms, that I can identify each fund’s use of different voting platforms.

There are three dominant voting platforms currently on the market: ProxyExchange (owned by ISS), Viewpoint (owned by Glass Lewis), and ProxyEdge (owned by Broadridge). The following figure displays BlackRock and Putnam Investments’ voting records (on their N-PX filings) in Apple Inc.’s 2019 annual meetings. We notice that both the table styles and proposal descriptions are different for the two N-PX forms. By comparing the two forms’ proposal descriptions with those on ISS and Glass Lewis’s own websites, we can infer that BlackRock uses ISS ProxyExchange as its voting platform and Putnam Investment uses Glass Lewis Viewpoint as its voting platform. [2] From here, I can identify each mutual fund’s purchase of proxy advice. [3] 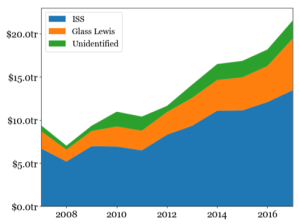 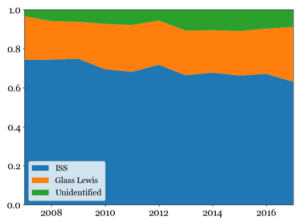 There are two reasons investors can vote in accordance with ISS’ recommendations. First, they can agree on the fundamentals of the proposal. For example, in 2017, ISS supported the compensation packages of Berkshire Hathaway bosses Warren Buffet and Charles Munger, who each earned a salary of $100,000 a year. Most of Berkshire Hathaway’s shareholders also voted to support the packages. In this example, the agreement between shareholders and ISS would probably not be a good measure of ISS’ influence. Alternatively, investors can agree with ISS because they listen to its proxy advice regardless of the fundamentals. The difficulty in disentangling these two possibilities is that we do not observe the proposal-specific fundamentals. Hence, most efforts to estimate ISS’ influence from investors’ votes are defeated by the omitted variable. [4]

Fortunately, with the information on proxy advisers’ customer bases, I can compare the votes of ISS’ customers with the votes of other investors who do not purchase ISS advice. This method implicitly controls for the proposal-specific factors because both groups are facing the same fundamentals. The only difference is that one has access to ISS’ proxy advice and the other does not. In 2012, ISS customers were 17 percent more likely than other investors to vote against a director when ISS recommended they do. That implies ISS can influence 17 percent of its customers’ votes on director elections in 2012. The influence of ISS on director elections increased to 27 percent in 2017. Similarly, I find that ISS’ influence on say-on-pay proposals increased from 18 percent to 26 percent during 2012-2017.

Without being able to identify proxy advisers’ customers, researchers tend to underestimate the severity of problems with robo-voting by comparing the number of ISS customers that use robo-voting with the total number of proxy-advice customers rather than with just the number of ISS customers. Accurately measuring the extent to which investors automatically execute votes is particularly important in light of the SEC’s proposed rule giving companies a chance to respond to a proxy adviser’s analysis before recommendations are  sent to investors. The rule is designed to reduce proxy advisers’ factual errors, but it will become effective only if investors review the advice. As the SEC asked, “In instances where proxy voting advice businesses provide voting execution services (pre-population and automatic submission) to clients, are clients likely to review a registrant’s response to voting advice?”

I find that the fraction of ISS customers blindly following its recommendations grew from 12 percent in 2006 to 23 percent in 2017. That implies that, without disabling the automatic voting mechanism, the rule will be much less effective in fixing factual errors: 23 percent of ISS clients are not going to review the registrant’s response even if they are given a chance to do so. In addition, I find that mutual funds with index funds are 10 percent more likely than others to robo-vote with ISS’ advice. This confirms Lund’s (2017) argument that index funds lack incentives to ensure that companies are well run because they don’t seek to outperform the index. [5]

[3] For the funds that are found to use Broadridge’s ProxyEdge, I am unable to identify their proxy advice supplier. As of 2017, they constitute of 5% of the mutual fund market. They are small mutual funds that usually have few companies in their portfolio.

[4] Except for Malenko and Shen (2016), who provide a clean identification for ISS’s influence on say-on-pay proposals from 2010 to 2011 by utilizing a cutoff in ISS’s voting guideline.

This post comes to us from Chong Shu, a PhD candidate at the University Of Southern California’s Marshall School of Business. It is based on his working paper, “Proxy Advice Industry and Its Growing Influence,” available here.