The economic consequences of the COVID-19 pandemic have upended countless budgets for 2020 and rendered long-term forecasts speculative at best. By now, most companies providing financial guidance have withdrawn it. Uncertainty abounds.

All the while, investors, proxy advisors, and other constituencies continue to demand pay-for-performance. Media and critics of executive compensation are culling through filings in search of companies taking actions that could be perceived as friendly to executives at the expense of stakeholders that may run counter to a strict pay-for-performance philosophy. Common modifications that may be taken in the current market to set more reasonable financial goals for long-term incentives (e.g., three consecutive one-year goals or use of discretion) risk being criticized by investors if outcomes do not surpass the goals set before the full impact of COVID-19 was apparent. In the absence of a reliable goal-setting process, compensation committees facing pressure to demonstrate pay-for-performance may increasingly turn to relative total shareholder return[1] (RTSR).

Before 2020, the use of RTSR as a performance metric was usually part of the conversation. Today, in part due to the difficulty to forecast reasonable financial goals, a discussion of long-term incentive metrics is remiss without consideration of RTSR. RTSR requires no goal setting, is simple to adopt, provides a defensible link to shareholder value, and has historically been accepted by shareholders and proxy advisors.

Prevalence of RTSR in long-term incentive plans increased 2% for 2020[2] to 60% of S&P 500 companies. Usage among companies in most industries increased slightly, and RTSR prevalence exceeds 40% for each S&P 500 sector for the first time. RTSR as a discrete metric is the most prevalent approach, used by 77% of companies, while 23% utilize RTSR as a modifier (an increase of 2% from 2019). Among companies employing RTSR as either a metric or modifier, 27% use a broad index group (e.g., the S&P 500) and 73% use a focused peer group. The S&P 500 is used by 23% of companies using RTSR.

The table below reflects the prevalence of RTSR programs within selected industries. 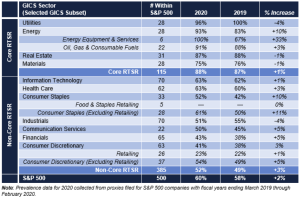 The selection of an RTSR peer group is a critical factor in the establishment of an RTSR program. We separate peer groups used by companies for measuring RTSR into four categories:

Peer group selection across industries may reflect the ease—or difficulty—companies have with picking peer groups and the degree to which companies within certain sectors are comparable to each other. Across the S&P 500, 73% of companies use a focused peer group (industry index or custom group) and 27% use a multi-sector group such as the S&P 500. Overall, 55% use peer groups selected by third parties (i.e., an index, either broad or focused).

Core companies, especially Energy, REITs, and Utilities, routinely use focused peer groups (Materials companies are an exception, discussed further below). Within the Energy sector, 100% of Oil and Gas companies benchmark RTSR against custom groups. This is likely due to the differing impacts oil prices have on companies within various segments of the Energy sector. For example, a rise (or fall) in global oil prices will affect exploration and production companies differently than oil transportation companies or oil refining companies. No Energy company uses the S&P 500 as its RTSR group, but a small number are adding the S&P 500 Index Composite as a performance peer.

In contrast, 52% of Utilities benchmark to a sector index group (e.g., Philadelphia Utility Index). Utilities generally are more comparable to each other within the sector than are Energy companies, though 30% use a custom performance group, possibly in recognition of differences in business models such as regulated versus non-regulated asset mix. Two Utilities use the S&P 500 Index for secondary comparisons (e.g., 25% weighting). Nearly one-half of REITs use multiple RTSR peer groups and 15% use a broad index, often alongside a focused peer group.

Non-Core companies are more likely to use broad indices, especially Information Technology and Communication Services (59% and 45%, respectively). Half of Information Technology companies use the S&P 500, and 9% other broad indices. Within Communication Services (which includes traditional media and telecom, as well as social media), just 9% use the S&P 500 and 36% other indices (or selected S&P 500 sectors). Industrials and Financials are more likely to use custom performance peer groups, possibly due to their ability to confidently pick companies with similar business models (and higher stock price correlations) than other Non‑Core companies. Consumer Staples favor custom compensation peers more than any other sector and rarely use the S&P 500, unlike other Non-Core companies. 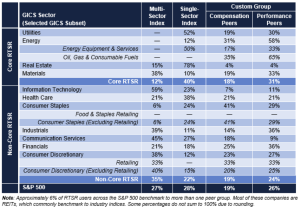 Note: Approximately 6% of RTSR users across the S&P 500 benchmark to more than one peer group. Most of these companies are REITs, which commonly benchmark to industry indices. Some percentages do not sum to 100% due to rounding.

RTSR as a Metric Versus Modifier

RTSR as a Discrete Metric

The table below provides examples of common performance plan determinations under the two methods.

Most companies using RTSR modifiers do not disclose imposing a cap on payouts at the plan maximum. For example, if financial performance pays out at 200% of target, then a modifier could increase the payout to above 200%. Eleven percent disclose capping the maximum payout at the plan maximum.

Companies using one-way modifiers tend to apply them as punitive measures for failing to achieve a threshold RTSR performance level, which may reduce (or cap) financial performance payouts. A small number of companies include upward modifiers to reward outperformance.

An alternative to the traditional ranking method is to measure the spread in TSR relative to a defined barometer of performance, such as an index composite or the median TSR of a peer group[4] (sometimes referred to as an “outperformance” method). This method is used by 12% of S&P 500 companies, but is most common among REITs, with roughly 43% measuring RTSR against an index composite figure or peer group median. This method is less than 10% prevalent across non-REIT S&P 500 companies.

The table below identifies the ways in which RTSR is used within selected industries. 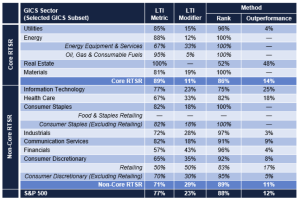 Unlike other design elements of RTSR plans, pay/performance leverage varies less across industries.

Note: When RTSR is used as a modifier, the most common performance hurdles are 25th and 75th percentiles (threshold and maximum, respectively), and the median/mode percentage modifier is +/- 25%. Data displayed in the above table excludes performance ranges for companies using RTSR as a modifier.

The standard performance target in RTSR plans is the peer group median. However, an increasing number of companies are targeting levels above the median. The reasons companies do so may be tied to trying to guard against proxy advisor criticism of pay plans or seeking to demonstrate more strenuous pay-for-performance requirements. Proxy advisors, especially ISS, are scrutinizing RTSR plans and occasionally criticizing companies for prescribing a target-level payout at median performance. Nonetheless, despite this ISS criticism, 89% of S&P 500 companies target the peer group median for their awards granted annually and 11% target above the median (the same prevalence as Exequity reported in 2018; 2019 prevalence was 9%). Among those targeting above the median, 25% target the 60th percentile, 66% the 55th percentile, two companies between the 55th and 60th percentiles, and one company the 75th percentile.

Some companies impose a “cap” on RTSR payouts when absolute TSR is negative. Prior to the COVID‑19 pandemic, some compensation committees were already uncomfortable with the possibility of above‑target RTSR payouts when shareholder returns over the measurement period are negative. With negative returns in several hard-hit industries, media and other interested observers are beginning to focus more on RTSR plans and whether companies are employing this feature. Proxy advisors favor capping awards at target when absolute TSR is negative.

When absolute TSR is negative, the method most companies use to cap payouts is to set the maximum payout at 100% of target. A small number of companies use other methods, including negative modifiers or even alternative pay-for-performance scales. To date, proxy advisors seem to prefer caps that disallow above-target payouts when absolute TSR is negative.

Companies commonly use stock price averaging periods to smooth out daily volatility at the beginning and end of the performance period. Among companies disclosing averaging periods, approximately 66% use a period of one week to one month (with 20 trading or 30 calendar days being the most prevalent periods), 20% use a period of five to ten weeks, and 14% use 90 calendar days or longer.

Companies considering RTSR for the first time, or making changes to an existing plan, should give thought to the key attributes of RTSR plans to avoid last-minute decisions or confusion when performance is assessed. A summary of key decision points is presented below. 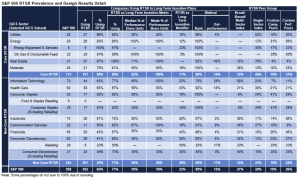 Note: Some percentages do not sum to 100% due to rounding.

[1] Total shareholder return is defined as the change in stock price plus reinvested dividends.

[3] In prior years, this range was 40%–50%, but prevalence has increased across several sectors.

[4] A company employing this method compares its TSR to that of the index composite figure and adjusts payouts based on the spread between the two figures. For example, if the company’s TSR is 15% and the index composite TSR is 5%, then the company beat the index by 10 percentage points. Assuming a payout of 2% of each percentile of outperformance, this would yield a 110% payout.

This post comes to us from board and management adviser Exequity. It is based on the firm’s memorandum, “2020 Relative TSR Prevalence and Design of S&P 500 Companies,” dated July 14, 2020.