CEOs have increasingly been speaking out on social issues that are not directly related to their core businesses. Why are they doing so, and what are the consequences for their companies?

In a new paper, I examine the phenomenon of CEO activism.  Using textual analysis of the public statements and social media posts of CEOs, I classify a statement as activist if the CEO comments on gender equality, racial diversity, immigration, gun control, environmental issues, universal healthcare, or human rights. In total, there are 187 activist statements by CEOs of S&P 500 firms in the 2014-2019 period – most of which are on gender issues, LGBT rights, and racial injustice.

First, I examine the motivations for CEO activism. CEO’s social statements can reflect a growing demand of customers for corporations to engage with societal concerns. Indeed, a survey by Stanford University shows that U.S. customers generally support CEO social activism. The risk of taking a stance on a social issue is that the CEO will antagonize people with opposing views. The same Stanford University study found that the respondents were more likely to stop using a company’s product if they disagree with the activist stance of the company’s CEO.

Social problems in the United States have political connotations, of course, with  measures calling for, say, tighter gun controls, stronger abortion rights, or greater environmental protections being associated with the Democratic Party. As a result, I analyze the content of CEO activist statements by using the Gallup poll of political preferences to categorize such statements as liberal (Democratic) or conservative (Republican). There seem to have a clear partisan bent. Of the 187 statements by CEOs of large U.S. companies on social issues, 161 are aligned with Democratic ideology. Yet after examining the political donations of U.S. CEOs as reported to the Federal Election Commission, I find that 70 percent are made to Republican causes or candidates (see graph below). 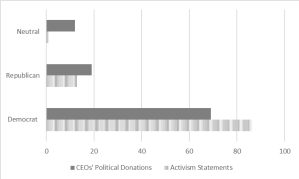 What explains this apparent paradox? Republican-leaning CEOs who donate to Republicans account for 122 of the 187 activist statements in the sample. Using a linear probability model, I find that Republican-leaning CEOs are 88 percent more likely to engage in social activism with a Democratic slant. If furthering their own political views was the dominant motive, the CEOs’ political donations and public opinions should be aligned. That they are not suggests a strategic motive for CEO social activism.

If, as with Americans generally, the political opinions of customers are polarized, traditional mass-market advertising strategies are less effective and catering to the preferences of one side of the political divide can be beneficial. Indeed, I find that CEO activism is more common among companies operating in the most politically polarized states like Georgia, Maryland, New York, and Texas. When CEOs express their opinions on social issues, they may be trying to attract investors and customers, and, since there has been a shift toward liberalism in America, those opinions have a liberal slant.

Next, I examine how investors perceive CEO activism and, in an event-study setting, find a positive market reaction. In the three-day event windows around CEO statements on social issues, the average cumulative abnormal return is 1.3 percent for the companies those CEOS lead. Sales revenue for those companies also increase in the following quarter. The positive market reaction may imply a lexicographic preference of stakeholders: Democratic-leaning stakeholders positively view a CEO’s social activism, but the Republican-leaning stakeholders show no reaction]. The economic benefits of social activism are more significant for companies selling consumer products in highly competitive industries. I find no statistically significant difference in economic consequences for companies with CEOs that engage in social activism compared with companies with CEOs who do not.]

These results are, to the best of my knowledge, the first produced by a detailed economic analysis of CEO activism. They show that CEO activism is driven by economic, rather than political, incentives.

This post comes from Professor Swarnodeep Homroy at the University of Groningen. It is based on his recent paper, “All That Is Left to Say: Why Are CEOs Speaking on Social Issues?,” available here.