Cryptocurrencies have the potential to operate as a new financial asset class; as a novel fund-raising tool for ventures; as a more efficient payment mechanism, especially across borders; and as the foundation for an innovative, new economy of distributed applications. They hold promise as competitors to entrenched incumbents in financial services and could generate substantial benefits for investors.

With the maturation of cryptocurrencies as a financial asset class, regulators face a crossroads. Some argue that governments should allow emerging technologies to develop unimpeded – and that attempts to regulate cryptocurrencies would simply push their exchanges, investment managers, and surrounding firms in their rich ecosystem offshore to more laissez-faire jurisdictions. Others view cryptocurrency markets as cesspools of illegality and fraud that should be tightly restricted, if not banned.

Fortunately, regulators are not compelled to choose between these two extremes. While some activities are clearly illicit, in most cases, regulation is a balancing act that involves weighing costs and benefits.  Regulators generally enjoy flexibility in when and how to act. In determining how to fine-tune cryptocurrencies’ regulatory regime, therefore, a critical question is how markets will react to regulatory action. Despite growing scholarly and regulatory interest in cryptocurrency markets, however, the debate concerning the optimal level of regulation has, to date, been conducted largely without data.

Our recent research fills this gap. In a new working paper, we examine how markets react to different types of regulatory actions. We gather original data on dozens of major regulatory actions in major trading jurisdictions, including China, the EU, Japan, South Korea, the UK and the U.S. These actions include newly announced rules, major enforcement actions, and high-impact judicial decisions. They also encompass a wide variety of subject matters, including money-laundering and investor protection measures; new licensing regimes for exchanges; pronouncements concerning their status as currencies, commodities, or securities for tax or regulatory purposes; and restrictions on their interoperability with other financial-services firms.

Our results are surprising. For virtually all regulatory activities, we cannot reject the null hypothesis that the event has no effect on the trading volume on exchanges located in the affected jurisdiction. For dozens of regulatory actions concerning a wide variety of subjects in six major jurisdictions – and for literally hundreds of different model specifications – we find essentially no evidence that these regulations either attract or repeal traders to the jurisdiction. Neither do we find evidence that national-level regulation affects global trading volume.

By way of example, the following figure shows changes in the volume of Bitcoin traded on U.S.-based exchanges following 23 major regulatory actions undertaken by U.S. regulators. The point estimates report the cumulative average abnormal U.S. trading volume around these actions; the bars denote the 95 percent confidence intervals. As the figure shows, the confidence intervals extend past zero – in most cases, far past zero – in either direction. 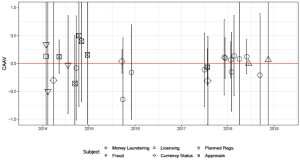 These null findings suggest that concerns that market activity will migrate away from jurisdictions that take a more assertive regulatory stance may be overblown. Over an extended time period and across many country and types of regulations, regulatory activities do not appear to move trading activity.

More generally, these findings cast doubt on the notion that imposing new regulations on cryptocurrencies will lead to capital flight. Cryptocurrencies are bought and sold on exchanges across the globe. Trading cryptocurrencies involves little investment in geographically inelastic physical or human capital. Thus, traders’ switching costs between exchanges in different jurisdictions are relatively low. In light of the ease of switching jurisdictions for cryptocurrency trading, the fact that we do not observe capital flows following the imposition of new regulations raises broader questions concerning the magnitude of capital flight following the imposition of regulations for other, stickier economic activities. (Interestingly, Cary Coglianese and Daniel Walters reach a similar conclusion regarding the economic effects of regulatory announcements concerning coal production.) Accordingly, as policymakers consider whether, and how, to regulate cryptocurrencies, concerns about capital flight to countries with a lighter regulatory touch should not be a first-order concern.

This post comes to us from professors Brian D. Feinstein and Kevin Werbach at The Wharton School of the University of Pennsylvania. It is based on their recent paper, “The Impact of Cryptocurrency Regulation on Trading Markets,” available here.