The COVID-19 pandemic has disrupted normal life and triggered massive economic slowdowns. In the United States, consumer spending has dropped dramatically and unemployment temporarily hit the highest levels since the Great Depression. As a result, many experts have projected a massive number of consumer and business bankruptcy filings in the coming months.

In our recent paper, “Bankruptcy and the COVID-19 Crisis,” we track bankruptcy filings in the U.S. using real-time data on the universe of filings. Historically, bankruptcy filings have closely tracked the business cycle and unemployment rates. However, we show that this relationship has reversed during the COVID-19 crisis thus far. The total number of bankruptcy filings is down by 28 percent in 2020 relative to the same period in 2019, contrary to media reports and experts’ expectations. This overall decline is driven mostly by declines in consumer bankruptcies, with consumer Chapter 7 filings down 20 percent and consumer Chapter 13 filings down 42 percent year-over-year. Overall, corporate bankruptcies in 2020 are nearly identical to 2019, with large business bankruptcies significantly higher than in 2019 but small business filings declining somewhat. Surprisingly, and in contrast to the what happened during the 2007-9 recession, states with larger increases in unemployment have seen the largest drops in bankruptcies. Overall, we suspect that a combination of government stimulus, loan forbearance, liquidity constraints, and high levels of uncertainty have depressed bankruptcy filings thus far. Difficulty accessing the courts through electronic or physical means may also play a role, and we are investigating the impact of these potential explanations. 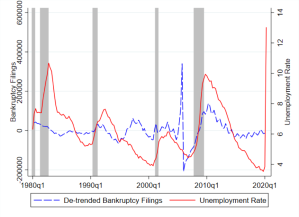 Using data from the Federal Judicial Center combined with real-time downloads of bankruptcy filings from the U.S. courts’ PACER website, we track bankruptcy filings in 2020 and compare current filing rates with those observed prior to the pandemic in 2019. We do this in a regression setting, which allows us to control for seasonal patterns that are typically observed in bankruptcy filings. The figures below show how bankruptcy-filing rates in 2020 compare with the 2019 baseline for four categories of filings: consumer Chapter 7, consumer Chapter 13, business Chapter 7, and business Chapter 11. 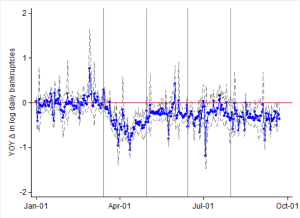 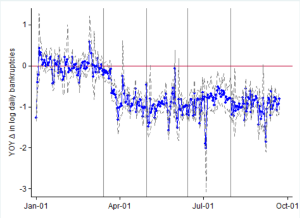 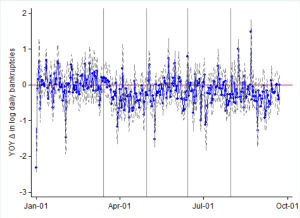 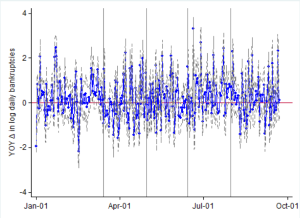 The figures make it apparent that, immediately after a national emergency was declared on March 13, consumer bankruptcies fell dramatically. For Chapter 7 filings, there was a rebound in mid-April, shortly after stimulus checks were sent as part of the CARES Act. However, even with this increase, Chapter 7 filings have remained below 2019 levels. Meanwhile, consumer Chapter 13 filings have persistently been 50 to 60 percent below 2019 level since the onset of the pandemic. The series for business filings are noisier due to fewer overall filings. However, there is a clear decline in business Chapter 7 filings of about 25 percent since March, while business Chapter 11 filings, which are dominated by larger firms, have risen so that in the most recent months they are about 50 percent above 2019 levels.

Counterintuitively, across the U.S. bankruptcy filings have fallen the most in states that have seen the largest increases in unemployment. The figures below display the relationship between the changes in unemployment in each state relative to the percent change in consumer bankruptcy filings so far in 2020. In the 10 states with the lowest increase in unemployment, consumer Chapter 7 and Chapter 13 filings have fallen by 20 and 39 percent, respectively. Meanwhile, the 10 states with the largest increase in unemployment experienced declines in consumer Chapter 7 and Chapter 13 filings of 23 and 51 percent, respectively. This is exactly the opposite pattern of the previous recession, when deteriorating economic conditions were associated with more bankruptcies across states. 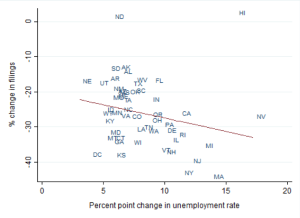 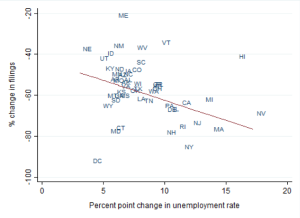 The precise reasons for these counterintuitive trends are unknown at this point, but our paper points towards five possible explanations. First, social distancing could have created a lack of access to lawyers and bankruptcy courts, making it difficult to file for bankruptcy. Second, the COVID-19 shock has created large amounts of economic uncertainty for households and businesses. Given this, many businesses and consumers (and their creditors) could be waiting to see how long the pandemic lasts and what the economic landscape looks like before making a decision to file for bankruptcy. Third, it is possible that some individuals and businesses simply do not have the liquidity necessary to pay court fees and lawyer expenses, as shown by Gross, Notowidigdo, and Wang (2014). Consistent with this idea, we do see that consumer Chapter 7 filings increased somewhat when stimulus checks were sent out in mid-April. Fourth, it is possible that government support through, for example, the CARES Act and the Paycheck Protection Program has provided the liquidity necessary for businesses and consumers to avoid bankruptcy during the COVID-induced shutdowns. However, as these government programs have expired towards the end of the summer we have not yet seen an increase in bankruptcies. Finally, it is likely that debt forbearance and collection moratoria are playing a key role in preventing bankruptcies for the time being.

This post comes to us from Jialan Wang and Jeyul Yang at the University of Illinois at Urbana-Champaign, Benjamin Charles Iverson at Brigham Young University, and Raymond Kluender at Harvard Business School. It is based on their recent paper, “Bankruptcy and the Covid-19 Crisis,” available here.