Soon after the coronavirus pandemic erupted in the spring, Congress enacted the Coronavirus Aid, Relief, and Economic Security (“CARES”) Act, pumping $2.2 trillion into the economy. Now, nine months later, many of that law’s critical elements have ended or will soon expire. Senate Majority Leader McConnell and Speaker of the House Pelosi are engaging in talks but have yet to agree on a new stimulus package.[1] When they do, we believe they can learn several important lessons from the effects of the CARES Act. In our article, we conducted an empirical study of important elements of the CARES Act and offer several conclusions about what did and did not work.

Our most important findings center on the Paycheck Protection Program (“PPP”) and the unexpected patterns of its disbursement, which proved to be less likely to benefit people in geographic areas most affected by the pandemic in terms of both infections and unemployment and also less likely to benefit the industries hardest hit by shutdowns. We attribute these patterns largely to the PPP’s unfortunate first-come, first-served model for loan disbursement.

The PPP was initially designed to address the devastating consequences of business closures and the loss of millions of jobs. The program immediately distributed more than a half-trillion dollars in potentially forgivable loans to small- and medium-sized businesses so that employees could continue to receive paychecks. In two rounds of funding – distributing $342 billion and $183 billion, respectively – the money went from the Small Business Administration  through a network of lending institutions and into more than 5 million businesses across the country.

But criticism was swift and widespread, centering on the distribution of considerable portions of that money to wealthy celebrities such as Kanye West, politically connected donors such as the Kushner family, and large corporations such as Shake Shack and Ruth’s Chris Steakhouse. Much of that criticism was, however, misguided and may draw attention from more serious problems with the PPP. For example, many smaller businesses received nothing after the first round of loans exhausted the PPP’s cupboard or collapsed before they could reach the PPP lifeline. In interviews we conducted as part of our study, several foodservice businesses were unable to secure loans in the first round of the program due to unclear rules and a lack of prior connections with lenders. Overall, SBA lending by industry did not seem to reflect the on-the-ground economic reality of the crisis, with firms in professional and technical services receiving a disproportionate amount of support at the expense of businesses in the employment-intensive retail, accommodation, and foodservice industries. Other scholars and observers have noted that African-American, Latinx, Asian, and immigrant-owned businesses were more likely to be concentrated in industries affected by the pandemic and less likely to receive PPP funding.[2] And, in a reprise of the 2008 financial crisis, large banks appeared to benefit from the crisis, pocketing $24 billion in fees from issuing PPP loans.

In our article, we focused on publicly available data on the PPP. We examined SBA data to answer various competing claims about the effect of the PPP and to evaluate whether the distribution of funds materially suffered from politics, corruption, or waste. Specifically, we considered and tested the hypothesis that PPP funds were deployed as a partisan political tool of the Trump administration. In our statistical analysis, we matched publicly available data from the SBA with other open sources of data, allowing us to run regression analyses on several theories about the design of the program.

In the first round of funding, which closed on April 15, 2020, we found, must surprisingly, weak negative correlations between loan disbursements and both Covid-19 incidence and unemployment claims. That is, states more affected by the virus, both economically and epidemiologically, were less likely to receive more PPP funding. A weak positive correlation existed between loan disbursements and voting patterns for Donald Trump in the 2016 presidential election. In the second round of the program, however, many of these trends reversed, as figure 1 illustrates. Surprisingly, the correlation of loan disbursements between the first and second rounds were negative and significant, indicating a stark shift in the disbursement of funds. In both rounds, loan disbursements did tend to reflect higher proportions of small business employment in the states, but this still tells us little about which firms received the funds and how effectively the funds were used to support jobs. Additional data, either from the release of more firm-level data or from access to administrative records from the SBA, must be analyzed in the coming weeks and months to understand how and why the disbursement of funds changed so dramatically between the two rounds. 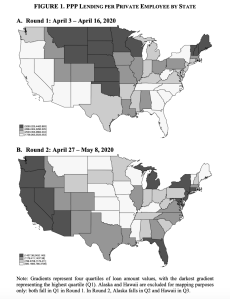 Conversely, to evaluate putative successes of the program, we also began examining whether the plan might have succeeded on broader terms by, for example, keeping millions of Americans employed or materially alleviating nationwide poverty in the United States during the pandemic. Firmer conclusions will require more granular, long-term data on employment numbers in the periods following PPP disbursement.

Some of the most important data about the PPP, however, do not yet exist because they relate to the large – but as of yet undetermined – number of businesses that collapsed before they were able to apply for or receive PPP funds. We conclude that the PPP’s greatest weakness was in failing to reach businesses that were unable to survive long enough to apply for or receive loans.

In our article, we also urge the SBA to release the remaining data on PPP borrowers. The agency had blocked these requests through a temporary stay,[3] but just released the information in the first week of December, many months after the SBA began collecting the data in April.[4] This information will allow researchers to better understand how the PPP unfolded on a business-by-business level, but should have been released long ago so that lessons gleaned from its analysis could inform policy on how to design subsequent rounds of funding.

We believe that any new stimulus program should avoid the first-come, first-served design of the original PPP, instead developing reasonable and transparent criteria for the use of the money and the priority of its distribution. With small businesses again struggling to survive, we hope that Congress will enact a new round of PPP that will work long enough for a vaccine to strengthen both our immune systems and the economy.

This post comes to us from William A. Birdthistle, a professor at Chicago-Kent College of Law, and Joshua Silver, a doctoral student at the University of Chicago. It is based on their recent paper, “Funding Crises: An Empirical Study of the Paycheck Protection Program,” available here.