In a new paper, I document a recent and strong standardization in the structure of executive compensation. This standardization is unexpected since, in principle, the optimal incentive contract is a function of many factors that vary among firms. Executives receive compensation in many different forms, including salaries, bonuses, long-term incentives, stock, stock options, retirement benefits, and various types of perquisites. Based on contract theory, we expect that each company designs its compensation plans using these elements in different proportions. However, even though we observe much heterogeneity in the design of compensation plans, more than 25 percent of the variation across firms disappeared in the last 10 years. 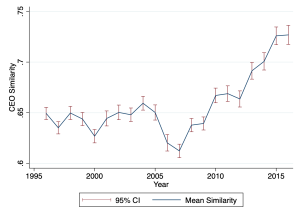 Compensation packages are becoming more similar across the U.S. economy. Firm characteristics do not explain this phenomenon, and it does not respond to industry-specific forces. I find similar levels and trends if I separate the sample based on firm size, age, and profitability. Additionally, compensation in all industries is growing more similar at similar rates, and the magnitude of that convergence is comparable for each industry and the economy as a whole.

An economy-wide change of this nature and magnitude raises two questions: Why is this convergence happening, and is it a good or bad thing?

Even though many major investors make their own voting decisions, the empirical findings suggest that shareholders routinely rely on proxy-advisers for recommendations on how to vote and that firms do react to their recommendations (McCahery, Sautner, and Starks (2016), Ertimur, Ferri, and Oesch (2013), Malenko and Shen (2016), Larcker, McCall, and Ormazabal (2015)). The small number of proxy advisers and the limited time for providing recommendations on thousands of proxy meetings has created a growing concern about a “best compensation practices” regime pushing towards a “one-size-fits-all” approach (Gordon (2009), Hou, Priem, and Goranova (2017), Murphy and Jensen (2018)).

I use a plausible exogenous variation in say-on-pay votes’ frequency to show that shareholder voting on executive pay increases convergence. In 2011, when the SEC made say-on-pay mandatory, it also required a shareholder vote on voting frequency. In particular, in the first year of say-on-pay, shareholders voted on whether voting would occur every one, two, or three years. Firms with more frequent voting are  subject  to greater shareholder influence. If that influence causes compensation packages to be similar among companies, the similarity should be greatest among firms with annual say-on-pay votes.

Indeed, I find that compensation plans become more similar faster for firms with annual say-on-pay votes than for firms with votes every three years. However, there is a potential issue with this finding: Firms with shareholders that prefer an annual say-on-pay vote may be significantly different from firms with shareholders that prefer a say-on-pay vote every three years. Thus, to compare similar firms, I restrict the sample to those where the election between a one-year vote and three-year vote was close. The basis for this strategy is that firms in which a one-year vote won against a three-year vote by a narrow margin can be a good counterfactual for those firms in which the opposite occurred (a three-year vote won against a one-year vote by a narrow margin). Using this more rigorous test, I find that, after the implementation of say-on pay in 2011, compensation became significantly more similar among firms with annual votes that among firms with votes every three years.

I also find that this convergence has relevant economic consequences. By definition, convergence eliminates outlier compensation packages. It can be undesirable if a firm would have otherwise set pay optimally but it can be beneficial in other cases. However, my evidence suggests that, on average, this convergence is detrimental.

Specifically, when CEO compensation becomes more standard, the CEO gets higher pay, and this payment is less sensitive to the firm performance and risk-taking. More important, convergence has a negative correlation with market value and innovation: The firm invests less in R&D and has fewer patents in the following years.

The growing similarity among compensation packages has not been reported before and has important policy implications. In recent years we have seen that institutional investors become more influential, and proxy advisers play a more active role. More importantly, there is a movement to get shareholders more involved in firm management. Even though this type of initiative has many potential benefits for corporate governance, its design and implementation should take into account the risk of reducing heterogeneity across firms.

This post comes to us from Felipe Cabezon, a PhD candidate in finance at the University of Southern California’s Marshall School of Business. It is based on his recent paper, “Executive Compensation: The Trend Toward One Size Fits All,” available here.