Disclosure and internal governance regulations are, along with accounting rules, distinguishing features of the public firm.  Deregulation agendas such as those of the Trump administration typically assume that many regulations on public firms have imposed high compliance costs.  Such arguments are at the center of the debate surrounding the decline in the number of public firms, changes in firm-size distribution and the growth of private equity markets.

Researchers and policy makers have extensively studied the costs and the impact of disclosure and internal governance rules (e.g., SEC, 2011; Coates and Srinivasan, 2014). However, as Leuz and Wysocki (2016) write in their survey of the literature (p. 529): “evidence on the causal effects of disclosure and financial reporting regulation is often difficult to obtain and still relatively rare.” One of the key challenges is that public firms can manipulate their size to avoid these regulations. As a result, analyses have been  limited to a small set of regulatory changes where manipulation is absent. Another challenge is that many methods are not well-suited for quantification of regulatory costs, as noted Leuz and Wysocki also note.

In a new paper, we attempt to advance the literature in two respects. First, rather than facing manipulation as an identification impediment, we follow the bunching estimation literature (e.g., Saez, 2010; Chetty et al. 2011; Kleven and Waseem, 2013; Alvero and Xiao, 2020) and use firms’ choices to bunch their public floats around the regulatory threshold as an identification strategy. The central insight of this approach is that more bunching by public firms to avoid financial regulation implies higher regulatory costs.  This approach allows us to analyze multiple regulatory changes over 20 years, which provides a more comprehensive understanding of the regulatory costs borne by public firms. Second, we propose an approach to translate the observed bunching to a monetary value of regulatory costs, which are critical inputs into quantitative cost-benefit analyses by regulators and policymakers.

We begin by documenting four regulatory changes around disclosure and internal governance rules since 1992.  Each change features a regulatory trigger around a public float (i.e., value of trading equity) threshold.  The first regulatory threshold stemmed from the introduction of the “Small business issuers” and scaled disclosures in 1992.  Firms below a $25 million float had less stringent disclosure requirements on financial data, executive compensation, and beneficial ownership. These scaled disclosures were later expanded to firms below a $75 million float in 2008. Next, the “Non-accelerated filer” was introduced in 2002.  Firms with a float below $75 million had 10 (15) more days to file their quarterly (annual) reports to the SEC.  With the passage of Sarbanes-Oxley in 2002, there emerged another break in the regulatory requirements around $75 million in float with an exemption to SOX 404.  This section of the law requires firms to hire an outside auditor to attest to their internal controls.  Finally, the passage of the JOBS Act in 2012 created the “Emerging growth company” (EGC) category for newly public firms with a public float less than $700 million.  See Table 1 for a summary of these regulations.

Next, we document that firms significantly bunch their public floats below each of the three regulatory thresholds (Figure 1) in years the regulations are in place, while we find no significant bunching in years without regulations.  On its own, such bunching provides compelling visual evidence that regulations triggered by these thresholds impose significant compliance costs on firms, and that these costs seem to outweigh the regulations’ potential benefits such as lower costs of capital.

Figure 1: CDF and Histogram for Public Float Around Regulatory Thresholds 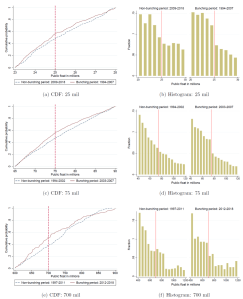 We apply our estimation model to a set of firms with public floats around the three regulatory thresholds: $25 million, $75 million, and $700 million. Comparing the density distributions of public float before and after the introduction of a regulation shows the extent to which firms bunch their float below a threshold to capture the associated regulatory benefits. Based on these density distributions of public float, our bunching model provides an estimate of the marginal firm that is indifferent between bunching and not bunching, an estimate of annual regulatory costs, and the present value of these costs scaled by total firm value. The estimated costs are summarized as follows:

Overall, the estimates reveal economically and statistically significant regulatory costs. See Figure 2 for a heatmap of these costs estimated for all firms.

A comparison of our estimated net regulatory costs with those in earlier literature and surveys shows that they are 10 percent to 70 percent smaller. There are two reasons for this difference.  First, our bunching approach estimates the net cost of regulations and thus incorporates the potential benefits of regulation available to firms. Second, survey based measures can be biased upward due to firms’ incentives to inflate self-reported regulatory costs to seek regulatory relief (e.g. Coates and Srinivasan, 2014; Parker, 2018; Alvero et al., 2019). 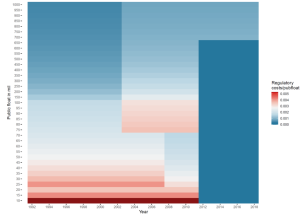 (b) Firms with public age>5 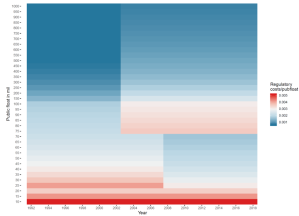 The debate surrounding the decline in the number of IPOs and listed firms (e.g. Doidge et al., 2017; Gao et al., 2013) considers the regulatory cost of being public as one potential explanation. We investigate this hypothesis using our new regulatory cost estimates in a discrete choice model of IPO decision for a sample of 10,877 venture capital-backed firms.  We find that regulatory costs have a significant impact on these private firms’ decisions to go public: A one-standard-deviation increase in regulatory costs correlates with a 10 percent decrease in IPO likelihood. Removing all regulatory costs identified in our paper increases the average IPO likelihood from 2.47 percent to 3.72 percent. Eliminating the JOBS Act would lead to 145 fewer IPOs between 2012 and 2018.[1]

These results have several implications for regulators and practitioners. First, significant bunching below regulatory thresholds suggests that firms, on average, incur regulatory costs that outweigh the benefits of these regulations for firms (in the form of, for example, lower cost of capital). Second, our net regulatory costs estimates are useful inputs for policymakers’ evaluation of a regulation’s social benefits and costs. Third, regulatory costs have meaningful impact on private firms’ decisions to go public and could explain some of the shifts in the public versus private equity market that happened over the past few decades.

[1] We also examine the impact of our estimated regulatory costs on public firms’ decisions to go private and find a insignificant effect. The null result is likely explained by some of the regulatory costs being irreversible, upfront costs, which would enter into firms’ going public decisions but are sunk costs for their going private decision.

Alvero, A., S. Ando, and K. Xiao (2019). Watch what they do, not what they say: Estimating regulatory costs from revealed preferences.

Parker, R. (2018). Hyping the cost of regulation. The Regulatory Review.

SEC (2011). Study and Recommendations on Section 404(b) of the Sarbanes-Oxley Act of 2002 for Issuers with Public Float between $75 and $250 Million. Technical report, Staff of the Office of the Chief Accountant, U.S. Securities and Exchange Commission.

This post comes to us from professors Michael Ewens at the California Institute of Technology and NBER, Kairong Xiao at Columbia Business School, and Ting Xu at the University of Virginia. It is based on their recent article, “Regulatory Costs of Being Public: Evidence from Bunching Estimation,” available here.