Barclays, Credit Suisse, Deutsche Bank, UBS, and other foreign banks played an outsized role in the 2008 financial crisis that cost U.S. households trillions of dollars of wealth. As credit markets froze, foreign banks’ U.S. offices experienced extreme stress and relied on the Federal Reserve’s emergency lending facilities for survival. After the crisis, policymakers tried to strengthen regulation of foreign banks’ U.S. operations, which account for roughly 20 percent of the U.S. banking system. In my new article, Domesticating Foreign Finance, I contend that the United States’ post-crisis reforms were insufficient and that foreign banks continue to pose unwarranted risks to U.S. financial stability.

Foreign banks have traditionally benefited from regulatory flexibility to operate in the United States through several different legal entity types. Under U.S. law, a foreign bank may establish a locally-incorporated bank subsidiary with all the privileges of a U.S. bank. Alternatively, a foreign bank may operate a U.S. branch – an extension of the parent bank rather than an independent legal entity. In addition, a foreign bank that meets elevated regulatory standards may set up a nonbank subsidiary, such as a broker-dealer or insurance company, in the United States.

This regulatory flexibility created significant risks in 2008. Before the crisis, many foreign banks established sprawling U.S. operations consisting of multiple branches, banks, and other subsidiaries. In some cases, a foreign bank maintained a network of U.S. offices without a top-tier, domestic entity through which to oversee the firm’s consolidated U.S. operations. These scattered structures posed challenges for both the foreign bank’s managers and its supervisory agencies, which were unable to quickly and accurately assess a firm’s aggregated U.S. risks.

The IHC rule, however, contained a glaring omission: It did not require a foreign bank to situate its U.S. branches within its IHC. Instead, the Federal Reserve continued to allow a foreign bank to operate branches in the United States separately, as extensions of the parent company.

The exclusion of branches from the IHC rule is problematic because foreign bank branches pose unique – and elevated – risks. In contrast to foreign banks’ subsidiaries and IHCs, foreign bank branches do not maintain capital in the United States, and they are not subject to standardized liquidity requirements. In addition, many foreign banks’ U.S. branches – which are prohibited from accepting retail deposits – rely heavily on volatile forms of short-term funding that magnify the likelihood of destabilizing runs. Moreover, because foreign banks’ U.S. branches are legally part of the parent company and are overseen primarily by their home country regulator, U.S. authorities lack timely access to important information about their financial condition.

Perversely, the Federal Reserve’s IHC rule has given foreign banks an incentive to shift activities from their U.S. subsidiaries to branches to evade stricter regulation. For example, between 2016 and 2019, four European banks – Barclays, Credit Suisse, Deutsche Bank, and UBS – collectively slashed $298 billion, or 33 percent of assets, from their U.S. IHCs. Over the same period, these firms increased their U.S. branch assets by $129 billion, or 42 percent, before slightly moderating the size of their branches. 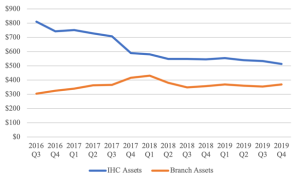 The migration of foreign bank assets out of subsidiaries and into branches is a classic case of regulatory arbitrage – institutions shifting activities to less-regulated legal entities to avoid oversight. Foreign banks’ regulatory arbitrage has intensified vulnerabilities in the U.S. financial system. Indeed, foreign bank branches were particularly problematic during the 2008 crisis. By strategically reallocating assets to their branches, foreign banks now threaten to reignite the systemic risks they created roughly a decade ago.

My article proposes a better approach to foreign bank regulation: requiring large foreign banks to convert their U.S. branches into subsidiaries. Specifically, I recommend that U.S. policymakers should (1) force foreign banks deemed “systemically important” by international regulators to establish separately-capitalized U.S. subsidiaries instead of branches and (2) prohibit any other foreign bank from operating U.S. branches with more than $25 billion in assets.

Contrary to popular perception, requiring subsidiaries would not lead to harmful balkanization or provoke retaliation that disadvantages U.S. banks. While it would likely reduce some short-term, cross-border capital flows, this is a feature, not a bug. Eliminating risky branches would diminish short-term capital markets transactions of dubious societal value while preserving socially-desirable long-term investments. Further, many other countries have already ring-fenced banking activities within their borders, and any additional retaliation by foreign regulators would not significantly harm U.S. banks, which are less internationally-focused than most foreign banks.

At its core, my article calls for reorienting the United States’ regulatory priorities. For the past several decades, the United States has mistakenly prioritized excessive financial integration at the expense of financial stability. The Federal Reserve’s omission of branches from its IHC rule is emblematic of U.S. policymakers’ undue deference to foreign banks, which has allowed those banks to specialize in activities that do not demonstrably benefit the financial system. Recognizing that the risks of these activities are primarily borne domestically, my proposals would rebalance the United States’ regulatory objectives to make financial stability a priority, without sacrificing economically-productive financial integration.

This post comes to us from Jeremy C. Kress, assistant professor of business law at the University of Michigan’s Stephen M. Ross School of Business. It is based on his recent article, “Domesticating Foreign Finance,” available here and forthcoming in the Florida Law Review.