In 2020, the number of IPOs by a Special Purpose Acquisition Company (SPAC) set records: A total of 248 SPAC IPOs raised over $75 billion. The boom continues in 2021: Each of January and February has seen over 90 SPAC IPOs, an unprecedented pace. 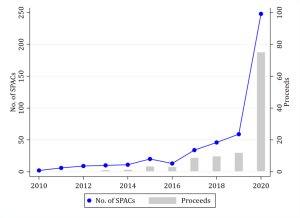 In a new working paper, we examine the structure of SPACs and discuss the economic tensions surrounding them.

What Is a SPAC?

A SPAC, a blank-check company created by a sponsor, goes public to raise capital and then find a non-listed operating company to merge with, in the process taking the company public. Units, usually priced at $10 each, are issued in the IPO. A typical unit is composed of a common share and a warrant (a call option issued by the company) entitling the holder to buy a fraction of a share at an exercise price of $11.50 with a maturity date that is five years after the completion of a merger. Importantly, the money raised in the IPO is placed in an escrow account (trust) where it earns interest. The units are later unbundled, allowing the shares and warrants to trade separately.

SPACs usually pay 5.5 percent of the IPO proceeds as underwriting commissions, with 2 percent paid at the time of the IPO and the rest deferred – payable only upon the completion of a business combination. Sponsors are typically compensated by retaining 20 percent of the SPAC shares almost for free, but these sponsor shares have no access to the trust account. Sponsors also usually purchase private placement warrants at the time of the IPO for $1.50 each to cover the up-front underwriting fees and future expenses with the proceeds, allowing the public investors to start with $10 per share in the trust account, gross of fees. All of the sponsors’ compensation and more than half of the underwriters’ fees are thus contingent upon the consummation of a merger.

SPACs usually set 18 to 24 months as a deadline to complete a merger. If a SPAC cannot consummate a merger by then, it must liquidate, distributing the IPO proceeds and the accrued interest in the trust account to its investors. Once a SPAC identifies a target company and reaches an agreement, public shareholders of the SPAC vote on whether to approve the proposed business combination.

Separately, at this time, each public shareholder decides whether to redeem his shares. The redemption option means that there is a money-back guaranty for SPAC investors. Unit holders are allowed to keep (or sell) their warrants even when they redeem their shares. Because the warrants will become worthless if there is no merger, shareholders have an incentive to approve almost all mergers, creating an obvious conflict of interest. Because most shareholders may choose to redeem their shares, the amount of cash available for a merger is uncertain. To mitigate this uncertainty, in the merger agreement, operating companies negotiate a minimum amount of cash that SPACs must deliver. Increasingly, the SPACs that liquidate do so because either the operating company or SPAC fails to meet the terms of the merger agreement, even though SPAC shareholders have approved it. The redemption option is a crucial element of the SPAC structure, because it greatly increases the incentive of a sponsor to negotiate an attractive merger so that the public shareholders do not redeem their shares.

The Economics of Three Key Players in the SPAC Market

From a private operating company’s point of view, merging with a SPAC is usually a more expensive way of going public than a traditional IPO. The total cost of the median company going public via a SPAC merger between January 2019 and June 2020 was 14.1 percent of the post-issue market cap, while it was 4.8% percent for traditional IPOs. However, many private companies still choose to go public via a SPAC merger.

In our paper, we analyze the relative advantages of going public by merging with a SPAC. Having raised capital in an IPO, a SPAC can negotiate a merger with an operating company in a timely manner. For example, starting in mid-2020, a series of companies in the electric and autonomous vehicle industries went public by merging with SPACs. We conjecture that these companies chose SPACs over traditional IPOs to swiftly take advantage of the public equity market’s favorable sentiment, evidenced by the 743 percent increase in the stock price of Tesla in 2020.

We view SPAC sponsors as equivalent to specialized private equity (PE) general partners (GPs) with deep pockets. The individuals behind many SPAC sponsors are industry veterans. Entrepreneurs who decide to go public via a SPAC merger often mention the benefit from sponsors’ industry expertise, referring to them as business partners. Furthermore, deep pockets allow sponsors to invest their own capital, differentiating them from regular underwriters. Private investment in public equity (“PIPE”) investments by sponsors are sometimes prearranged at the time of the IPO, and are known as Forward Purchase Agreements. PIPE investments by private equity funds, sovereign wealth funds, or others are also increasingly common. These PIPE investments either offset redemptions or augment the cash that is delivered in the merger.

SPAC sponsors’ compensation (founder shares (the “promote”) + private placement warrants) is similar to that of private equity GPs (management fees + carried interest). To facilitate a merger, sponsors on average forfeit 34 percent of their common share promotes and 42 percent of their private placement warrants and transfer most of them to other investors as inducements. Importantly, these haircuts are contingent: Sponsors forfeit their compensation more when the proposed merger is not welcomed by the market, as evidenced by high redemption ratios, to salvage the deals.

We document investor returns on SPACs that have gone public in 2010 and later by dividing the lifecycle of SPACs into two periods – the SPAC period, which is between the SPAC IPO and the completion of the business combination or liquidation; and the deSPAC period, which starts from the first trading day as a merged company. For the SPAC period, investors have earned on average an annualized return of 9.3 percent. Even the worst-performing SPAC provided a positive return of 0.51 percent per year. A SPAC is equivalent to a default-free convertible bond with extra warrants, making 9.3 percent an attractive average return.

The average one-year buy-and-hold return for the merged companies’ warrants is 44.3 percent. The warrants, out-of-the-money call options in many cases, are riskier and benefit from volatility, but this large difference in average returns is puzzling.

The Recent Evolution of the SPAC Market

Our back of the envelope calculations show that a typical SPAC unit has been providing securities that are worth substantially more than the $10 offer price. We document two important recent evolutions of the SPAC market. 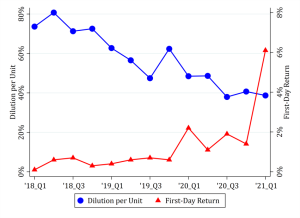 First, for many years, the market did not pay attention to this “free lunch.” The market has recently become more efficient, in that investors have started to realize the lucrative returns of the SPAC period investment on the first day of trading. Every single one of 91 SPAC IPOs in January 2021 increased in price on the first day of trading, with average first-day returns of 6.1 percent.

Second, with the increased investor demand for SPAC IPOs, sponsors have started to structure them with fewer warrants and less dilution. This change reduces the wealth transfer from operating company and deSPAC period shareholders to SPAC period investors, making SPACs more attractive for shareholders in the merged company.

There are reasons to believe that future deSPAC-period returns may still be disappointing, but SPACs may remain an alternative to traditional IPOs. For now, too many SPACs are chasing deals, increasing the valuations that operating companies can negotiate and reducing subsequent deSPAC period returns. Yet the recent trend of providing fewer warrants means less dilution and more upside potential for the deSPAC period investors. Some SPACs have started to offer contingent sponsor compensation, giving sponsors an incentive to find better deals. We view the market as adjusting toward a more sustainable equilibrium.