Although it has been used in the past, the resurgence of the Special Purpose Acquisition Company (SPAC) has been spectacular in the last two years. According to its promoters, a SPAC offers relatively easy access to a listing on a regulated exchange for a private company looking to go public. The sudden proliferation of SPACs has prompted the SEC to investigate how underwriters are managing the risks involved, according to Reuters. [1] The investigation has so far involved letters from the  SEC’s enforcement division asking the underwriters to provide the information voluntarily and, as such, has not yet risen to the level of a formal investigative demand. 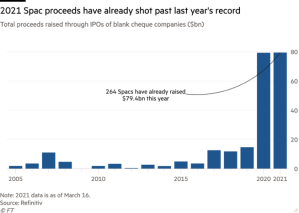 In short, a SPAC is also called a “blank check” company because it is a listed non-operating company that raises funds from public markets to acquire a private company within two years after the SPAC’s IPO. After the SPAC’s acquisition is approved by its shareholders and closes, the business combination is finalized, bringing a private company to the public markets.  If the SPAC sponsors cannot find an appropriate target company, and therefore fail to consummate a transaction within that two-year period, they must return the principal to the shareholders and dissolve the SPAC. 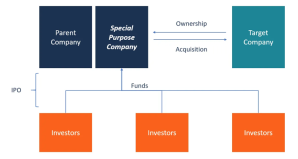 For the SPAC to be effective, four parties are diverging from their normal practices regarding public offerings.

Both NASDAQ and the NYSE have to accept the listing of the SPAC knowing that it is only, initially, a depository of cash. The SPAC itself is a shell and yields no immediate economic benefits for its shareholders. Usually, only companies that meet certain criteria can be qualified for listing.

Regarding a SPAC listing on the NYSE: “A SPAC seeking to list on the NYSE needs to demonstrate an aggregate market value of $250 million and a market value of publicly held shares of at least $200 million (excluding shares held by directors, officers, or their immediate families and other concentrated holdings of 10 percent of more), as well as meet a new rule requiring an IPO price per share of at least $4 at the time of initial listing.”[4] The rule was proposed to the SEC in March 2008 and approved in May.

When the business combination is executed, a private company becomes indirectly listed on the NYSE or NASDAQ. The thorough examination by the exchange of the company seeking listing under the SPAC is conducted without the benefit of an SEC registration of that target.

When the business combination occurs between the SPAC and the target company, the exchange only verifies the conformity with its listing standards. For those who are not familiar with the exchange rules, it is not the responsibility of the exchange to vet the information provided by the company.

The Securities and Exchange Commission Dilemma

The SEC, in effect, delegates the decision of the adequacy of the listing of the business combination solely on the basis of its view of the interest of the exchange and “the public.” Exchanges are not looking at whether investors provide reliable financial and business information. This dereliction of duty of the SEC creates an imbalance in information between SPACs and other listed companies.

On October 1, 2018, the NYSE proposed a rule change to amend its Company Manual for SPACs. The change would reduce the minimum number of public holders required for continued listing from 300 to 100 and would enable the NYSE to exercise discretion to allow SPACs a reasonable time following a business combination  to demonstrate compliance with the applicable quantitative listing standards.

However, the SEC sent a warning to investors in the context of the practice of using celebrities to promote SPACs:  “SPAC transactions differ from traditional IPOs and have distinct risks associated with them.  For example, sponsors may have conflicts of interest so their economic interests in the SPAC may differ from shareholders.  Investors should carefully consider these risks.  In addition, while SPACs often are structured similarly, each SPAC may have its own unique features, and it is important for investors to understand the specific features of any SPAC under consideration.”[7]

The development of a SPAC market that includes companies from outside of the United States[8], requires urgent regulatory action from the SEC. It would Indeed be inconsistent to relinquish the safeguards that are associated with an IPO. Promoters are simply exercising regulatory arbitrage detrimental to investors.

The Investors’ Due Diligence is Hampered

Retail investors, irrespective of their qualifications, have access to SPACs through the exchanges.  In the case of an IPO,  a syndicate of underwriters performs due diligence,  with advisers, brokers, and fund managers reling on the available information on the company that is acquired by the SPAC after registration with the SEC and filing of form S-1 or F-1, depending on the nationality of the issuer. In the absence of an SEC registration when the business combination is listed, the protection of investors (especially retail investors) is weaker.

The first level of due diligence falls to investors in the initial SPAC. They are the ones signing the “blank check” on the basis of the reputation and credit worthiness of the promoters, as the SPAC contains cash that is 90 percent invested in a trust managed by these investors. The main characteristic of a SPAC is that it is not an operating company.

The Company’s Bonanza is Irresistible

A private company may find it irresistible to be listed rapidly without having to submit itself to the cost, delay, and scrutiny of a registration or the listing standards of exchanges. However, the company’s boads of directors would be well advised to comply with its fiduciary obligations.

Making the decision to list carries a responsibility for the board. Directors of shady companies should measure the risks they are taking if investors sue. They should also exercise judgment on the quality of the promoter and its ability to assume their fiduciary responsibilities.

Last but not least, one year at most after payday, the company will have to file its annual reports under U.S. rules and regulations. It is essential that the board be adequately informed

Before it is Too Late: We Have Been There Before

Some of us remember the good old  days of back-door listings (also known as reverse mergers or reverse IPOs) accepted by the the exchanges .  Back-door listings allowed Chinese companies to massively use non-U.S. listed entities to merge and float on the NYSE or NASDAQ without other formalities. The Chinese Securities Regulatory Commission  did not assume any responsibility for those companies.

Unscrupulous intermediaries were cashing over 10 percent commissions to organize these investor traps with owners who were only too happy to monetize their stake in such companies outside of China and in dollars.

Some of the listed companies using reverse mergers went into bankruptcy. Chinese company Luckin Coffee’s Chapter 15 bankruptcy and delisting from NASDAQ, for example, remind us of these risks.[9] The SEC decided to act and increase the requirements before the company could become listed on an exchange in order to provide greater protections for investors. Under the new rules, Nasdaq, NYSE, and NYSE Amex will impose more stringent listing requirements for companies that become public through a reverse merger.

The SEC rules then were simple and should be used as an example to better regulate SPACs:

This post comes to us from Georges Ugeux, who is is the chairman and CEO of Galileo Global Advisors and teaches international finance at Columbia Law School.